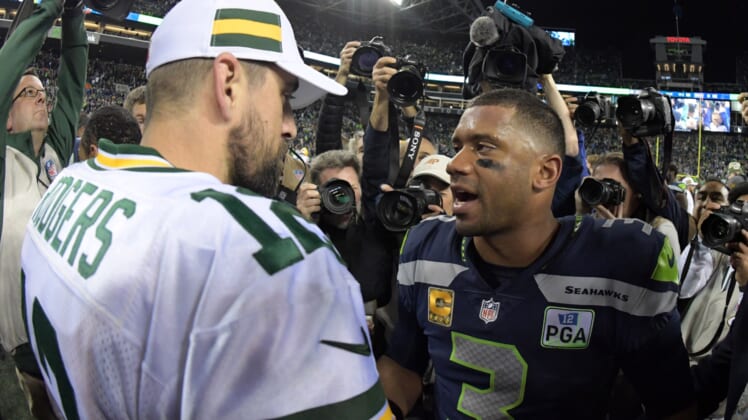 The NFL Playoff field is down to eight teams after a wacky Wildcard Weekend around the league. The four teams that earned first-round byes are pretty strong home favorites.

The NFC Divisional Playoffs kick off Saturday afternoon as the No. 1 seed San Francisco 49ers host the Minnesota Vikings. The story here are the two quarterbacks.

Later on Saturday, the Titans will head to Baltimore to take on the Ravens. Can Derrick Henry have a repeat performance of what we saw during last week’s upset win over the Patriots?

Sunday’s games are equally as intriguing with the red-hot Kansas City Chiefs attempting to exact revenge against a Texans squad that defeated them at Arrowhead during the regular season.

Then at Lambeau, the Packers will look to protect the Frozen Tundra against a Seahawks squad in need of improvements on the ground.

These are among the biggest burning questions heading into the NFL Divisional Playoffs.

There’s a false narrative surrounding Garoppolo. It includes him being the beneficiary of a tremendous play caller in Kyle Shanahan and one of the NFL’s best defenses. While both points are true, Garoppolo proved over and over again during the regular season that he has a clutch gene.

This included four game-winning fourth quarter drives and a narrow defeat of the Seahawks in Seattle Week 17 to capture the NFC West title. Garoppolo ended the regular season having put up a 101.9 rating on third down and a 107.1 rating in the fourth quarter.

Can Garoppolo keep this going against a stout Vikings defense in a game that should be much closer than the current 6.5-point spread? It’s a huge question heading into Saturday. That’s especially true given that Minnesota forced 31 turnovers during the regular year and Jimmy GQ committed 18 giveaways of his own.

Is there any chance Kirk Cousins gives an encore performance?

That’s all fine and dandy. But a rested 49ers defense with multiple reinforcements coming back presents a vastly different challenge for Cousins. He’ll have to go up against Nick Bosa, Dee Ford and Kwon Alexander, the latter two of whom are returning from injury. That’s not great for Mr. Cousins.

San Francisco is a completely different monster with Ford in the game. Add in the return of defensive play caller Kwon Alexander and stud safety Jaquiski Tartt, and that’s magnified further.

Before winning in New Orleans last week, Cousins and his Vikings were 1-4 against teams that finished the regular season with a winning record. For his part, the veteran threw five of his six interceptions in those five games. A lackluster performance Saturday at Levi’s would doom Minnesota’s hopes of a major upset.

Henry is pretty much the sole reason Tennessee took out the Patriots in surprising fashion last week. The former Heisman winner was absolutely dazzling, going for 204 total yards and two touchdowns against a Pats defense that finished the regular season yielding the sixth-fewest yards on the ground.

This helped make up for a lackluster showing from Ryan Tannehill, who put up 67 net passing yards. Sure Tannehill will have to improve for the Titans to have any chance against the No. 1 seed Ravens, but Henry must put up a repeat performance come Saturday.

At issue here is Baltimore’s run defense. Led by the underrated Brandon Williams, this unit ranked fifth against the run during the regular year. The Ravens also yielded just 148 combined rushing yards in their final two games.

As near double-digit favorites Saturday night against the Titans, most expect Baltimore to advance to the AFC Championship Game without much of an issue. Here’s a team riding a ridiculous 12-game winning streak and featuring the likely NFL MVP.

Making just his second career playoff start, the hope is that Jackson can repeat what was an historical regular season for the young quarterback. As it had all season, Baltimore will be relying on him to do just that.

Under defensive-minded head coach Mike Vrabel, the Titans flourished on that side of the ball down the stretch. This included Tennessee giving up 27 combined points over the past two games.

The good news for Jackson is that no stage has proven to be too big for him in his career. He also tallied 20 total touchdowns compared to two interceptions en route to leading the Ravens to a 6-1 home record and 30 points per game at M&T Bank Stadium during the regular year.

Are these Chiefs different than the team that lost to Houston?

More than anything, Kansas City’s ho-hum 5-3 start to the season reflected a defense that just wasn’t getting it done under coordinator Steve Spagnuolo. The Chiefs yielded an average of 25 points per game during that span. This included a 31-24 home loss to the Texans back in Week 6.

Since then, Kansas City’s defense has picked it up big time. This unit yielded an average of 10 points per outing in its five games following the team’s Week 12 bye.

We already know Patrick Mahomes and Co. will do their thing against the Texans come Sunday. However, the fate of Kansas City’s championship aspirations will rest on its defense.

The hope here is that a renewed pass rush up front and the dynamic play of safety Tyrann Matthieu will help the Chiefs’ absurd recent defensive performance continue into the divisional round. They should have the advantage against a Texans offensive line that yielded seven sacks of Deshaun Watson last week.

Is Bill O’Brien in over his head?

Let’s get this out of the way. O’Brien was not anywhere near a major component in the Texans defeating Buffalo last week. In fact, a strong argument exists that Sean McDermott outcoached him.

Up by three late in fourth quarter, O’Brien opted to go for it on fourth and short rather than kick a field goal to put the Texans up six. Like clockwork, Buffalo drove down the field to tie the game up and send it into overtime. It’s these mind-boggling in-game coaching decisions that have plagued O’Brien over the course of his career.

Buffalo might not have had the postseason experience to make BOB and the Texans pay. Sunday’s game against a veteran head coach Andy Reid who will be manning the sideline for his 27th career postseason game is a completely different monster. O’Brien needs to be up to the task here. It’s that simple.

Will Russell Wilson finally get a rushing game?

Seahawks head coach Pete Carroll touched on it following last week’s ugly wildcard win over the injury-plagued Philadelphia Eagles. These Seahawks need to get more out of their running backs after seeing their top-three ball carriers go down to injury.

Travis Homer and Marshawn Lynch accounted for 19 yards on 17 attempts against a No. 3-ranked Philadelphia run defense. That’s just not going to cut it at Lambeau come Sunday afternoon.

Green Bay boasts a vastly superior secondary compared to the Eagles. It should be able to limit Wilson much more than we saw last week. Without any help from his running backs, this could lead to some major issues for the MVP candidate. The good news? Carroll still seems hawkish on Lynch seeing more action in the Frozen Tundra.

Green Bay is just 3-2 in the five games Rodgers has started at home during the playoffs. This comes on the heels of the Packers going 13-2 at Lambeau in their previous 15 playoff games inside the Frozen Tundra.

It’s more about Green Bay’s defense struggling. The hope here is that a vastly improved unit will be able to contain Seahawks quarterback Russell Wilson. Including last week’s win over the Eagles, Wilson is just 3-4 in seven career postseason road starts.