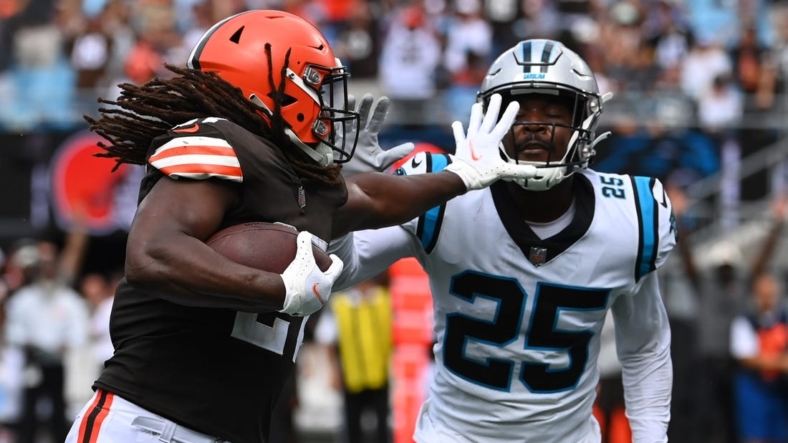 Cade York kicked a 58-yard field goal with 8 seconds left to rescue the visiting Cleveland Browns in a 26-24 victory against former teammate Baker Mayfield and the Carolina Panthers on Sunday afternoon in Charlotte, N.C.

Mayfield helped the Panthers rally for 17 fourth-quarter points and go ahead on Eddy Pineiro’s 34-yard field goal with 1:13 left in his first game with the team. The Browns then moved into Carolina territory and were forced to let York win it on a fourth-down kick.

Kareem Hunt scored two touchdowns, Nick Chubb gained 141 yards on 22 carries and quarterback Jacoby Brissett was 18-for-34 for 147 yards and a touchdown for the Browns.

Mayfield, who had been Cleveland’s starting quarterback until a chaotic offseason that resulted in his trade to Carolina, was 16-for-27 for 235 yards, one touchdown and one interception.

Running back Christian McCaffrey, who’s considered a centerpiece of Carolina’s offense, was held to 33 rushing yards and 24 receiving yards.

The Browns went up 20-7 midway through the third quarter when York kicked a 34-yard field goal at the conclusion of a 13-play drive.

The Panthers finally produced a sustained drive by going 75 yards in 11 plays, with Mayfield running 7 yards for a touchdown with 12:51 remaining. Cleveland responded by using more than 6 1/2 minutes for a 10-play drive that resulted in York’s 36-yarder and a 23-14 edge.

On the next snap, Mayfield’s 75-yard touchdown strike to Robbie Anderson kept the Panthers in it.

Earlier, Grant Delpit’s interception of Mayfield helped set up the first points, with the Browns taking possession at the Carolina 42.

Cleveland struck on Brissett’s 1-yard toss to Hunt in the second quarter three plays after the turnover.

The Panthers managed just 21 yards on their first 19 snaps before producing a six-play, 75-yard touchdown drive in the second quarter. That ended with Christian McCaffrey’s leap from 1 yard out with 1:57 left in the half.

The Browns extended their lead to 17-7 on York’s 26-yard field goal with 21 seconds left in the half.