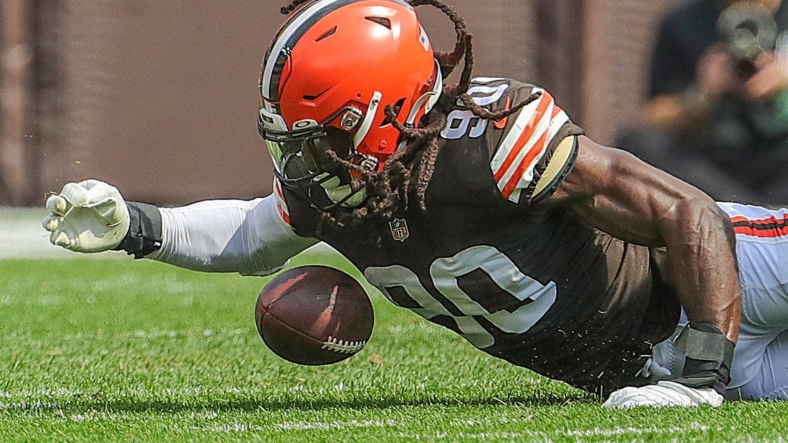 Clowney suffered an ankle injury in the third quarter of Sunday’s bitter loss to the New York Jets. He was seen in a walking boot after the game.

Winovich is out with a hamstring injury and James has a biceps injury.

Clowney already has 1.5 sacks in two games to go with a forced fumble and five tackles.

The Browns are facing a short week and licking their wounds after a staggering setback. The Jets scored twice in the final 82 seconds to rally past the Browns 31-30, Cleveland’s second fourth-quarter meltdown in two weeks.

Browns head coach Kevin Stefanski addressed two major factors — how his defense allowed a 66-yard touchdown pass to Corey Davis and why his offense scored with 1:55 remaining instead of milking the game clock.

Stefanski said after the game Sunday that “obviously, guys are not on the same page” on defense.

“Let me be very clear, anything that happens out there I’ve got to get fixed,” Stefanski said Monday. “That’s on me.”

As for Nick Chubb’s 12-yard touchdown run — his third of the game — that put the Browns up 30-17 with 1:55 left, Stefanski said he would like to have that back. Compounding the problem is that the extra point was missed, leaving the Browns with just the 13-point lead. The Jets had just called their third and final timeout, and Chubb’s touchdown came on first down.

“Let me be clear on this: ‘I absolutely could’ve told Jacoby (to not let anyone score there) that in that situation,” Stefanski said of his instructions to quarterback Jacoby Brissett, adding “I wish I had said” something and Chubb “would have done it.”