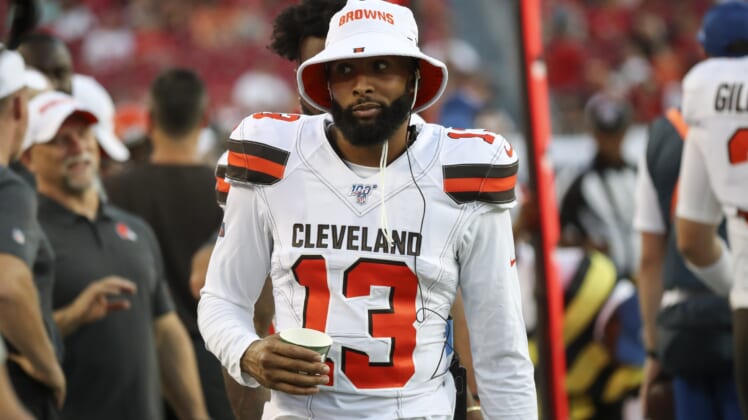 Cleveland Browns rookie head coach Kevin Stefanski is taking a hands-on approach when it comes to his most enigmatic and talented offensive star, Odell Beckham Jr.

Stefanski will meet with Beckham today for a “face to face” talk.

“I’m looking forward to sitting down with Odell face to face,” Stefanski said, via Mary Kay Cabot of the Cleveland Plain Dealer. “At that point, that’s when I can start laying out my expectations for Odell and for all of our players.”

As for what type of expectations they may discuss, you can be sure it will center around Beckham’s off-field activities. Of late, they have not all been positive for him or the organization he represents.

Stefanski hinted he’s ready to put that all behind him, however, and move on to next season.

“I don’t have a relationship yet with Odell, so we need to sit down and get to know each other,” he said. “He needs to get to know me, I need to get to know him, and then we’re going to move forward with our eyes ahead to 2020.”

As for the on-field stuff, Beckham and the entire Browns passing offense went through a disappointing 2019 campaign. After being traded to Cleveland, Beckham had his worst full season as a professional, catching 74 passes for 1,035 yards and just three touchdowns.

That’s why Stefanski was hired in the first place, however. He’s a former offensive coordinator and is widely respected around the NFL for his offensive prowess. And based on what he said about Beckham, the Browns aren’t necessarily looking to trade their talented receiver, as it’s been talked about by many this offseason.