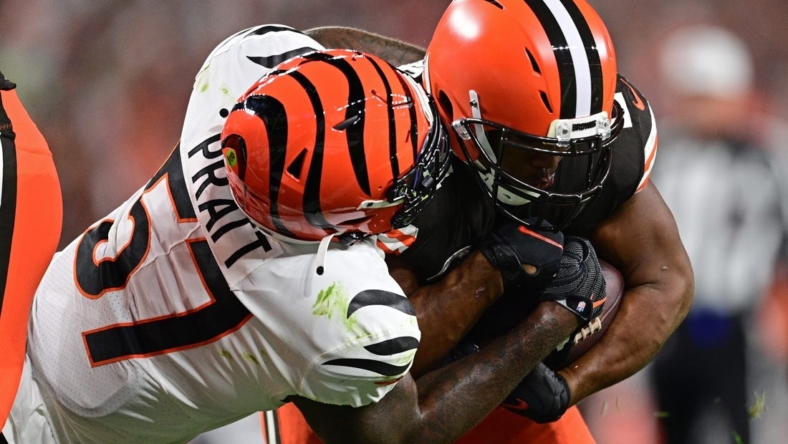 Nick Chubb rushed for two touchdowns and Jacoby Brissett accounted for two scores to fuel the host Cleveland Browns to a 32-13 victory over the Cincinnati Bengals on Monday.

Chubb finished with 23 carries for 101 yards. He scored on a 3-yard run in the second quarter and an 11-yard jaunt in the fourth to boost his NFL-leading rushing touchdown total to 10 on the season.

Brissett completed 17 of 22 passes for 278 yards and a touchdown to help the Browns (3-5) snap a four-game skid overall and defeat the Bengals for the fifth straight time. He also rushed for a 3-yard touchdown in the third quarter.

Amari Cooper added five catches for 131 yards and reeled in his team-leading fifth touchdown of the season.

Cincinnati’s Joe Burrow fell to 0-4 in his career against Cleveland despite completing 25 of 35 passes for 232 yards with two touchdowns and one interception. He tossed a 13-yard score to Tyler Boyd early in the fourth and a 41-yard touchdown to Tee Higgins later in the quarter.

The Bengals (4-4) were limited to just 229 total yards of offense in their first game without Ja’Marr Chase. The star wideout reportedly will miss multiple weeks due to a hip injury.

Cooper atoned for throwing an interception by reeling in catches for 29 and 18 yards to highlight a 10-play, 78-yard drive in the second quarter. Chubb capped the drive by taking a direct snap and rushing over right tackle to open the scoring.

Cincinnati was whistled for 12 men on the field on the extra-point attempt, allowing Cleveland to opt to attempt a two-point conversion. Chubb found the end zone on that play as well to boost the Browns’ lead to 8-0.

The Browns converted three separate third-down plays before Brissett dove for the pylon to complete a 3-yard touchdown run. The scamper gave Cleveland an 18-0 lead at 8:57 of the third quarter.

The Bengals went three-and-out on their next possession and Brissett found Cooper in the corner of the end zone for a 4-yard score.

The Browns countered Boyd’s touchdown reception with an eight-play, 83-yard drive that was capped by Chubb bolting up the middle for an 11-yard score at 8:46 of the fourth quarter.