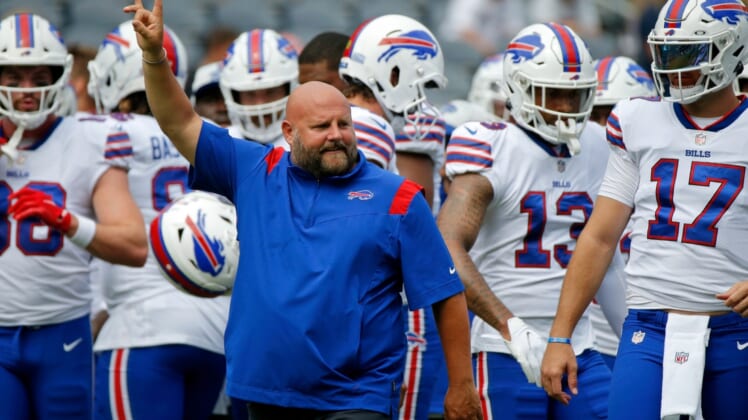 Brian Daboll said his priority as the new coach of the New York Giants will be to help quarterback Daniel Jones reach his potential.

Daboll, 46, met the media for the first time since he was hired on Friday and said it’s time for Jones to have some coaching stability. Entering his fourth NFL season, Jones will be learning from his third head coach and fourth offensive coordinator.

“There’s a lot of things to like about Daniel, and we’ll just take it one day at a time, we’ll work with him, we’ll help him get better,” Daboll said of Jones, 24. “We’ll help him be a better leader, we’ll help him be everything. That’s our job as a coaching staff and as an organization. It takes everybody. It’s not just me. It’s the rest of the coaches on our staff, it’s the scouts, it’s the support staff, it’s the ownership group. It takes a lot to raise a quarterback, if you will. He’s been around the block these last three years with some different pieces. We’re going to try to give him some stability and just take it from there.”

Jones was the No. 6 overall draft pick in 2019. In his most recent position as offensive coordinator of the Buffalo Bills, Daboll worked with the No. 7 pick of the 2018 draft — Josh Allen.

Allen threw for 4,407 yards and 36 touchdowns this season, but Daboll said he doesn’t expect Jones to turn into the eastern New York version of Allen.

“We’re going to take it day by day,” Daboll said. “We’re not going to make any predictions, and I wouldn’t do that to Daniel or really any player. I don’t think that’s fair to compare him to another guy that I was working with. He’s himself. We’re going to find out what he does well, we’re going to try to implement a system that suits him, and then it’s our job to bring pieces in that help him to be the best version of himself and the best quarterback for us.”

Jones, 24, was limited to 11 games in 2021 because of a neck injury sustained in a Week 12 win over the Philadelphia Eagles that ended his season. Jones, the sixth overall pick in the 2019 NFL Draft, completed 232 passes for 2,428 yards with 10 touchdowns and seven interceptions on the season.

Since taking over from two-time Super Bowl champion Eli Manning in 2019, Jones is 12-25 as the starting quarterback, throwing for 8,398 total yards with 45 touchdowns and 29 interceptions.