About the Breeders’ Cup, favorites & odds for $31 million purse event 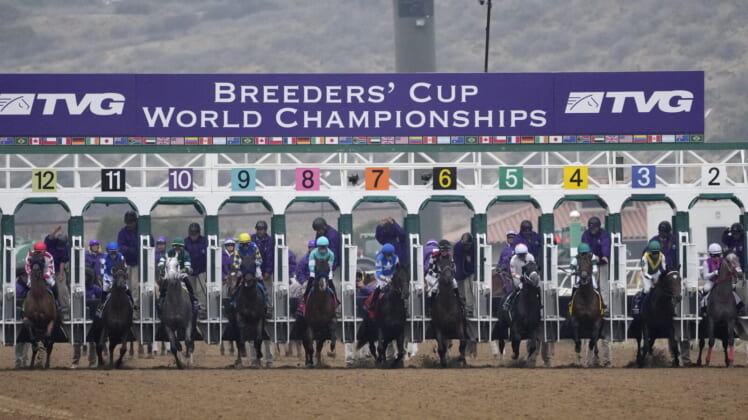 The 2021 Breeders’ Cup World Championships are taking place today and tomorrow in Del Mar, Calif., just north of San Diego. A Breeders’ Cup win is the equivalent to the Super Bowl in the NFL, the Stanley Cup in the NHL and the World Series in the MLB.

The year-end horse racing event, which debuted in 1984, consists of 14 races and $31 million in purses and awards as horses from all over the world compete.

The Breeders’ Cup will be televised on NBCSN and the final race – the $6 million Longines Breeders’ Cup Classic – being shown on NBC, beginning at 5 p.m. on Nov. 6.

It is the first time the Del Mar Thoroughbred Club is hosting the Breeders’ Cup since 2017.

This year’s Breeders’ Cup is coinciding with the Del Mar Thoroughbred Club’s horse racing season, which began on Wednesday. The final five races on Friday’s slate are for the Breeders’ Cup and races 4-12 on Saturday are for the World Championships.

Here are the betting lines and favorites for Saturday’s Breeders’ Cup races.

With high purse amounts in addition to deep and competitive fields, there will be attractive betting chances, even if you are watching from a Las Vegas Sportsbook or using a sports betting website or app.

Here are some of the notable horses to watch.

When it comes to the $6 million Longines Breeders’ Cup Classic, the opening favorite is Knicks Go at 5-2 odds, whose trainer is Brad Cox in post five. There have been 40 winners starting from post positions four and five in Breeders’ Cup races. Post four belongs to Essential Quality, who stands at 3-1 odds and is the next favorite.

Essential Quality, who is also trained by Cox, won the Belmont Stakes back in June at Belmont Park in Elmont, N.Y.

The next favorite horses are Art Collector in post six and Max Player in post nine at 8-1 odds.

The tough part of Max Player is that he is starting on the outside and it will difficult not just to get a lead in the 1.25-mile race, but to maintain that distance starting from the outside.

Among the double-digit odds in the final race at the Breeders’ Cup, Tripoli in the first post is 15-1, Express Train in the second post is 20-1 and Stilleto Boy in post seven is 30-1.

Tripoli won a few months ago in the grade 1 (G1) Pacific Classic at Del Mar in August, while Express Train edged out Tripoli in the G2 San Diego Handicap, also at Del Mar on July 17.

Besides the Breeders’ Cup Classic, there are other horses that are on watch.

In the sixth race of Saturday’s slate, scheduled for 1:19 p.m. with a $1 million purse, one horse that stands out is Ginobili, who is currently sitting at 4-1 odds in post three.

Ginobili, the four-year-old Gelding, won his past two races, with the latest coming at Del Mar in the G2 Pat O’Brien Handicap on Aug. 28.

Although Ginobili has not raced since then, he could turn some heads as Life Is Good at 4-5 odds and Silver State at 7-2 odds are higher favorites.

To kick off Saturday’s Breeders’ Cup slate, beginning at 12:05 p.m. with a $1 million purse, Gamine is the heavy favorite at 3-5 odds followed by Bella Sofia at 5-2 odds. The race, which features only five horses – the smallest field across this year’s 14 Breeders’ Cup races – is seven furlongs long and will be on dirt.

Race five, the Breeders’ Cup Turf Sprint, is five furlongs long with a $1 million purse slated to start at 12:40 p.m. Golden Pal is the favorite at 7-2 odds in the third post followed by Gear Jockey in the tenth post and Great Britain horse, Emaraaty Ana in the second post both at 5-1 odds. Kimari in post nine, Lieutenant Dan in post four and Glass Slippers in post one are each at 6-1. Glass Slippers is a second horse from Great Britain in this race.

The fifth race is one you have to watch as there are six horses that are also eligible to compete but are not in the original 12 that will start the race.

In the Maker’s Mark Breeders’ Cup Filly and Mare turf seventh race, War Like Goddess is the favorite at 7-2 odds followed by Love in post six and Loves Only You, who are both 4-1 odds. This field features the most global representation of any Breeders’ Cup race as Loves Only You, from Japan, and Love, from Ireland, are two of nine horses from outside the United States in this 12-horse battle.

In the Qatar Racing Sprint, the eighth race of the day, Jackie’s Warrior in the second post are heavy favorites at 6-5 followed by Dr. Schivel at 4-1.

In race nine, the FanDuel Breeders’ Cup Mile, Space Blues in the third post opens at 3-1 odds. The Irish horse leads in front of Mo Forza in post six at 5-1 followed by a trio of horses at 8-1.

Races nine and ten have $2 million purses and in the 10th race, scheduled to begin at 4:00 p.m., Letruska in post six is the heavy favorite at 8-5. Shedaresthedevil in post eight and Malathaat in post three are both 4-1.

In the final race before the Breeders’ Cup Classic – the Longines Breeders’ Cup turf with a $4 million purse – Tarnawa is the favorite in post 13 at 9-5 odds, followed by Domestic Spending in post three at 4-1.