Bears try to cash in on win behind Justin Fields, host Lions 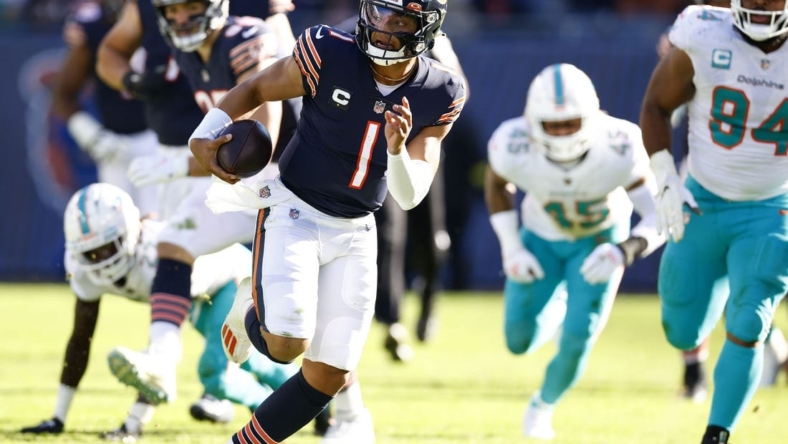 Justin Fields appears to be developing into the franchise quarterback the Chicago Bears hoped he’d become when they drafted him in the first round last year.

The next step is to have some of his big performances translate into victories.

The Bears have lost five of their last six games heading into their NFC North matchup with visiting Detroit on Sunday.

Fields was named the NFC Offensive Player of the Week after he rushed for 178 yards and a touchdown on 15 carries and passed for three more scores in Week 9. It still didn’t translate in the win column, however, as Miami pulled out a 35-32 victory.

Fields has rushed for 408 yards on 49 carries over the past four games and scored a rushing touchdown in each of the last three games.

“The main thing is just not forcing big plays, just letting them come to me,” he said. “Of course, I’ve always thought I’ve been able to make the big play. One thing you can’t do is force big plays.”

Head coach Matt Eberflus and his staff are trying to maximize Fields’ running ability while emphasizing sliding and getting out of bounds to protect himself.

“Our guy is certainly very talented and is able to do a lot of those things,” Eberflus said of Fields being a dual threat. “He’s doing it in a smart way.”

The Bears (3-6) need to tighten up their defense to make Fields’ production more meaningful. They have allowed 84 points over the last two games.

Chicago didn’t have a sack or force a turnover against Miami.

“We’ve got to have creative ways to create pressure,” Eberflus said. “Winning on third down a lot of times is creating pressure to get the quarterback uncomfortable.”

The Lions (2-6) snapped a five-game losing streak by defeating Green Bay 15-9 on Sunday. They can get out of the division cellar with a win Sunday.

“I do feel like we’re going in the right direction,” coach Dan Campbell said. “I know the wins are not there, though we just got one. I like the improvement. I would like to be in a better place than we are, certainly. I feel like we should have at least two more wins here and that’s on me.”

Containing Fields will be the top priority for Detroit’s defense.

“His ability on third down, that’s where they really got Miami,” Campbell said. “A number of third-and-8, third-and-10 — there’s an opening in there, he takes it and he’s gone. That’s where he’s very lethal.”

The Lions were stout in the red zone against the Packers, as Green Bay went 0-for-4 in that category. Detroit picked off Aaron Rodgers three times — twice in the end zone — after making just two interceptions in its previous seven games.

Quarterback Jared Goff threw for 137 yards, including two touchdowns, after a 321-yard performance the previous week against the Dolphins.

D’Andre Swift, the team’s most explosive player, has seen limited touches after missing three games due to shoulder and ankle injuries. He caught a 20-yard pass against Green Bay but only had two carries. Jamaal Williams had a season-high 24 carries for 81 yards.

Swift got in a limited practice on Wednesday as did defensive back Kerby Joseph, who was in concussion protocol after making two interceptions on Sunday. Center Frank Ragnow (foot) was also limited.