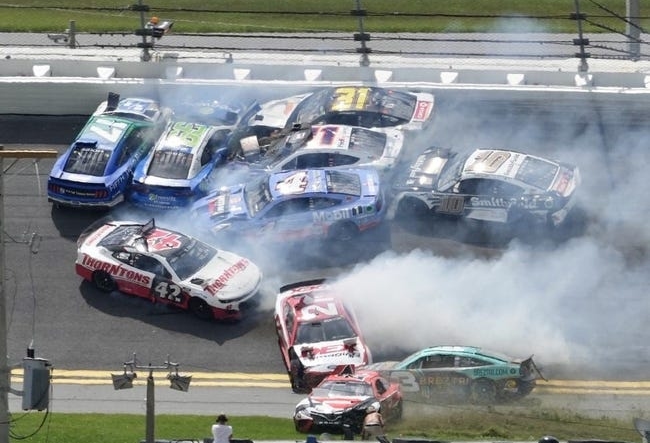 Austin Dillon passed Austin Cindric with three laps left in the Coke Zero Sugar 400 and went on to win the rain-interrupted regular-season finale at Daytona International Speedway in Daytona Beach, Fla., on Sunday.

After a red-flag period of 3 hours, 19 minutes, leader Dillon — who appeared headed to a rain-shortened victory shortly after noon — led the battered field of cars (only 14 on the lead lap) to the green with 16 circuits remaining in the 160-lap race.

With three laps left around the high-banked 2.5-mile superspeedway, Dillon’s famous No. 3 got a run and tapped Cindric’s No. 2 car, sending the Ford down to the apron.

With teammate Richard Childress Racing teammate Tyler Reddick behind him and holding up potential runs, Dillon led the way to the checkers.

The victory — Dillon’s fourth in the Cup Series and second at Daytona (2018 Daytona 500) — propelled him into the 10-race playoff starting next week at Darlington Raceway in Darlington, S.C.

The Clemmons, N.C., native appeared to have it during the delay, as rain hampered the Florida east coast all weekend.

But he said it was better to win it outright and at full speed than while sitting in the garage area in the rain.

“One hundred percent … man, we’re in the playoffs,” said Dillon, who will make his fifth career appearance in the championship series. “If we waited too long, I was afraid somebody might wreck behind us. I wanted to lead. We had a big run to him, and I had my teammate back there.”

Said Cindric, “He was racing for a playoff spot.”

Ryan Blaney, who started the day 25 points ahead of Martin Truex Jr., held off a charge by the Joe Gibbs Racing driver and earned the series’ final playoff spot by just three points.

Both drivers — who were in playoff positions at the start of the race’s scheduled 160 laps — knew at least one would make it in, which turned out to be the case with Dillon’s triumph.

The two winless drivers were hampered by damage to their cars in wrecks.

“We were very fortunate, that’s for sure,” said Blaney, who finished 15th. “It was not a good day from the get-go. At that point, our fate was not in our hands. Thankfully, we were able to get enough cars in the wrecks, and we kept moving up (in points).”

Truex held a lead over Blaney during the red-flag period, but he needed Cindric to win for the second time, which would have allowed both Truex and Blaney to make it into the postseason on points.

“I was just not fast enough to keep up with those guys,” Truex said. “Too much damage to do what we needed to do.”