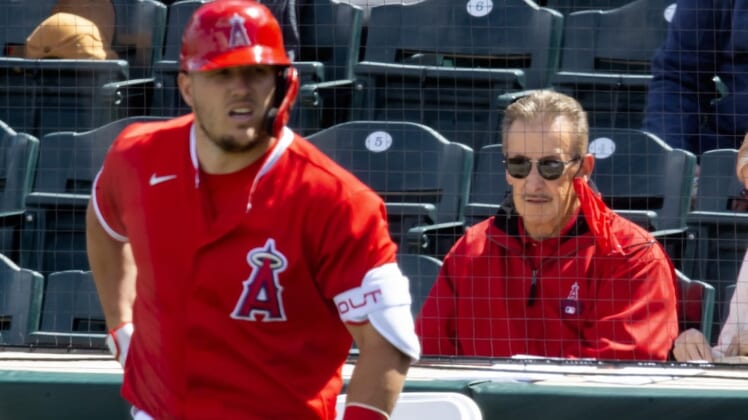 The Angels released a statement from Moreno, who said it had been a “great honor and privilege” to own the team for 20 seasons.

“As an Organization, we have worked to provide our fans an affordable and family-friendly ballpark experience while fielding competitive lineups which included some of the game’s all-time greatest players.

“Although this difficult decision was entirely our choice and deserved a great deal of thoughtful consideration, my family and I have ultimately come to the conclusion that now is the time. Throughout this process, we will continue to run the franchise in the best interest of our fans, employees, players, and business partners.”

The team has retained Galatioto Sports Partners as financial adviser.

Moreno paid $182.5 million cash for the Angels in May 2003, just seven months after the team won the only World Series in franchise history. In its 2022 valuation of MLB teams, Forbes said the Angels are worth $2.2 billion — ninth among all teams.

The Angels have made the postseason six times under Moreno’s ownership, never reaching another World Series. They have not been to the playoffs since 2014, when they were swept by the Kansas City Royals in the American League Division Series.

Those are the only three playoff games of the remarkable career of three-time American League MVP Mike Trout.

It has been a difficult season for the Angels, who got off to a bright start before a 14-game losing streak cost manager Joe Maddon his job. In an interview with the Tampa Bay Times over the weekend, Maddon laid out his complaints with the organization over how it is run and said he has severed ties after more than 30 years of on-and-off employment with the Angels.

On Tuesday, MLB.com put out its new ranking of baseball’s farm systems and judged the Angels’ as the worst, giving the team not much hope for a resurrection despite having Trout and reigning MVP Shohei Ohtani on the roster.

Ohtani is a free agent after next season and has publicly questioned his future in Anaheim.

Entering play Tuesday, the Angels are 52-70 and in fourth place in the American League West, 25.5 games behind the Houston Astros and out of wild-card contention.