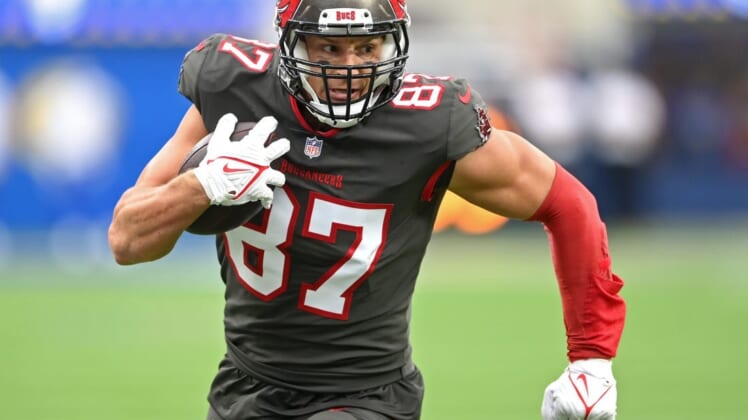 Five-time Pro Bowl tight end Rob Gronkowski has called it a career for the second time in the NFL, this time from the Tampa Bay Buccaneers.

“I will now be going back to my retirement home, walking away from football again with my head held high knowing I gave it everything I had, good or bad, every time I stepped on the field,” Gronkowski posted.

“From retirement, back to football and winning another championship and now back to chilling out, thank you to all,” Gronk wrote.

One person who doesn’t think he’ll stay retired is his own agent, Drew Rosenhaus.

“It would not surprise me if Tom Brady calls him during the season to come back and Rob answers the call,” Rosenhaus told ESPN after the news broke. “This is just my opinion but I wouldn’t be surprised if Rob comes back during the season or next season.”

At age 29, Gronkowski retired after nine seasons and three Super Bowl championships with the New England Patriots. He was lured back into the game by the appeal of playing again with Brady when the legendary Patriots quarterback joined the Buccaneers before the 2020 season.

The two won a fourth Super Bowl together after the 2020 season but fell short of the goal in 2021, losing to the eventual champion Los Angeles Rams in the NFC divisional playoffs.

In 143 career games, Gronkowski has 621 receptions for 9,286 yards with 92 touchdowns. He has been selected as a first-team All-Pro four times and ranks third all-time in TDs among tight ends.