Alabama’s Evan Neal picking up support as No. 1 pick 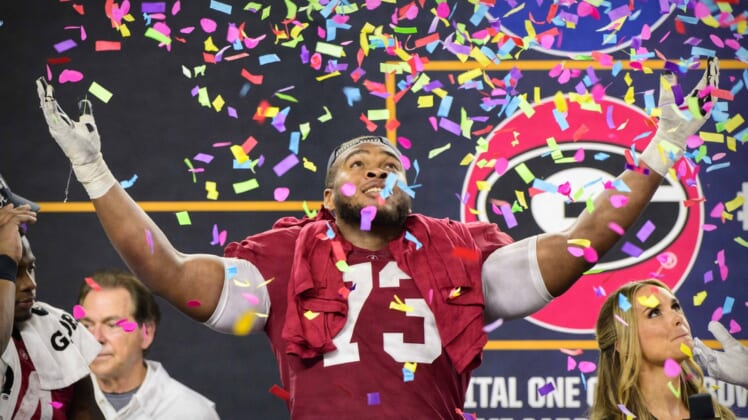 When push comes to shove, the public believes the Jacksonville Jaguars will choose to protect franchise quarterback Trevor Lawrence rather than make life more difficult on opposing signal-callers.

Michigan defensive end Aidan Hutchinson remains the +165 favorite at BetMGM to be the first pick in the 2022 NFL Draft. However, his odds have lengthened since opening at +100.

Meanwhile, Alabama offensive tackle Evan Neal has seen his odds shorten from +2500 to +175 with the public backing him with 33.2 percent of the bets and 43.2 percent of the money wagered on the No. 1 pick. Neal started 40 games at Alabama across both tackle positions and left guard.

Neal has already overtaken Hutchinson at DraftKings, where the former Crimson Tide star is being offered at +120 to +200 for Hutchinson. Oregon defensive end Kayvon Thibodeaux and North Carolina State offensive tackle Ikem Ekwonu are both being offered at +700.

Ekwonu has been another rising name with several teams holding tops picks likely to be in the market for pass protectors. He opened at +10000 to be the No. 1 overall pick but is now being offered at +400 at BetMGM.

The Detroit Lions hold the No. 2 overall pick followed by the Houston Texans, New York Jets and New York Giants in the top five.

Lindy’s Pro Football Draft guide listed edge rusher and offensive tackle among the Jaguars’ three biggest needs entering the offseason. Edge rusher was also listed among the Lions’ and Texans’ top three needs, while the Giants could be looking at replacing up to four starters along their offensive line.