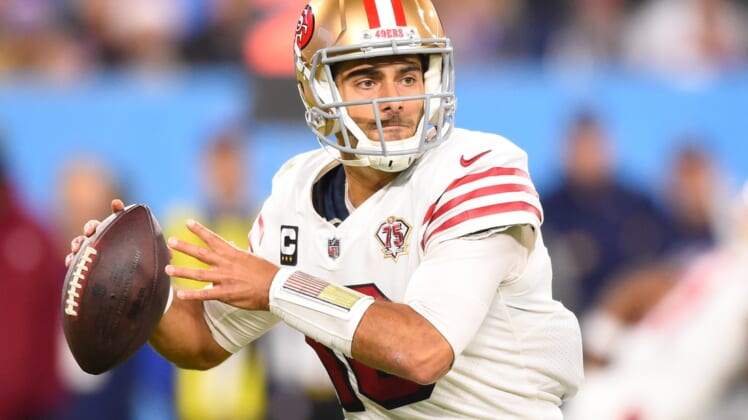 San Francisco 49ers quarterback Jimmy Garoppolo is doubtful for Sunday’s home game against the Houston Texans due to his injured passing thumb.

Garoppolo has a torn ligament and chipped bone in his right thumb. He missed all three practices this week and the 49ers didn’t allow him to attempt any throws.

“That’s why we didn’t have him go out there, because we were told each day that we can push it off one more, it gives him a better chance for it to stay,” San Francisco coach Kyle Shanahan told reporters after Friday’s practice. “So we’re trying to hold off throwing until (Saturday), possibly Sunday.”

Garoppolo was injured during a 20-17 loss to the Tennessee Titans on Dec. 23. He has started 14 of San Francisco’s 15 games this season and passed for 3,494 yards, 19 touchdowns and 10 interceptions.

Garoppolo sat out Week 5 with a calf injury when the 49ers lost 17-10 to the Arizona Cardinals.

Rookie Trey Lance is in line to make his second career start. Lance completed 15 of 29 passes for 192 yards and one interception against the Cardinals, and also rushed for 89 yards on 16 carries.

Lance has played in five games and has 354 yards, three touchdowns and one interceptions. The No. 3 overall pick has rushed for 137 yards and one score.

However, Shanahan wasn’t ready Friday to name Lance the starter against the Texans.

“Jimmy’s not out,” said Shanahan, “so I’m holding out hope.”

The 49ers (8-7) will likely have leading rusher Elijah Mitchell (759 yards) back on the field. His knee injury has progressed and he was a limited practice participant all week after missing the past three games.