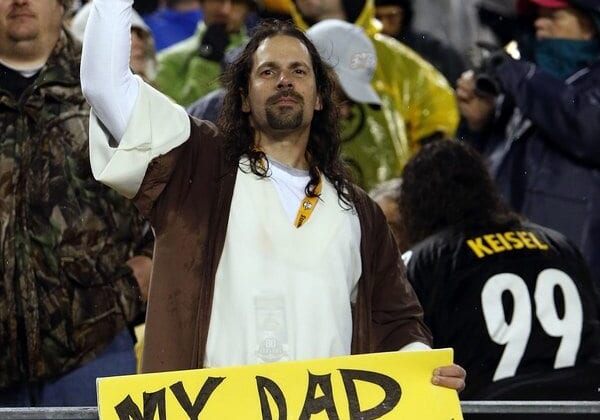 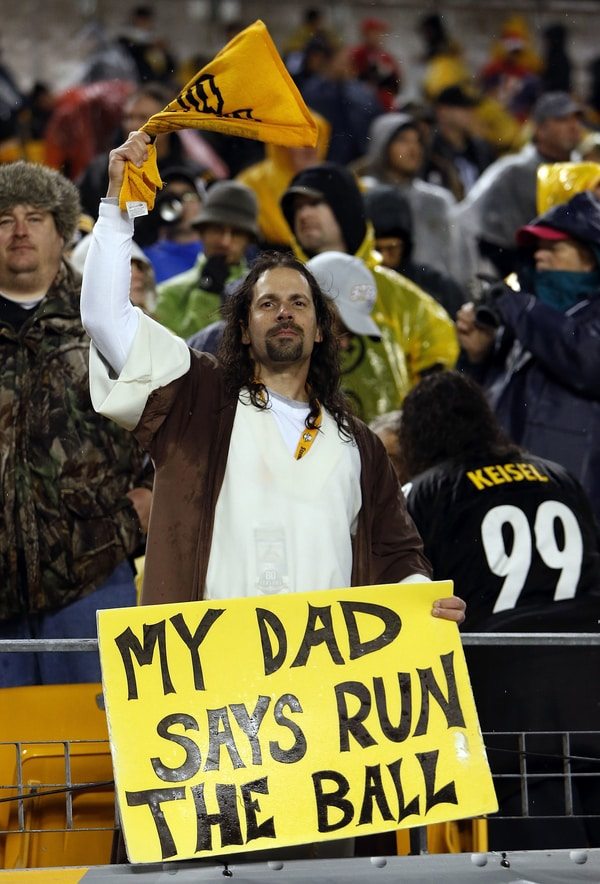 What’s the funniest NFL sign ever to grace a stadium? It’s a bold claim, but we think we’ve found the best sign just as we found the wackiest MLB food.

The goal of a sign creator is to be on TV. Sure, it is fun for everyone in the stadium to see your brand of creative humor, but that is nothing compared to the kudos received for your handiwork being broadcast for the entire nation to see.

This is a good thing. This means that the best signs in NFL stadiums are gold. The humor is on point, the subject is topical, and the result is a fleeting moment of fame that makes it all worthwhile.

Here are 12 of the funniest NFL signs we have ever seen.

At least there’s love in Cleveland… 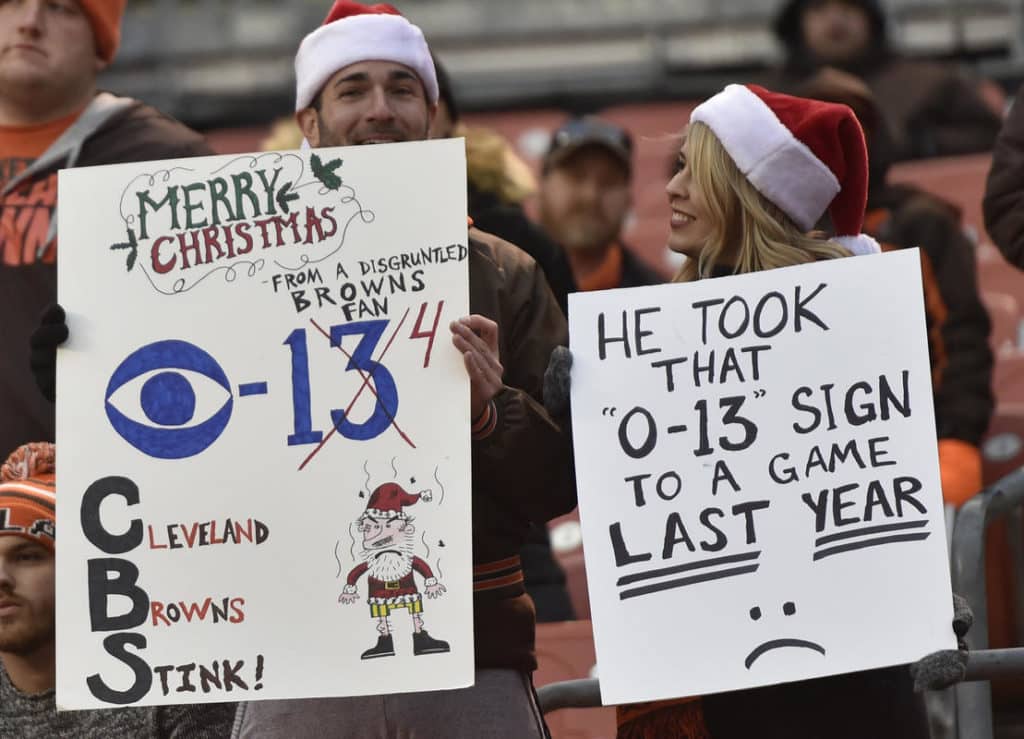 We could probably fill a whole list with signs based on the misery of life as a Browns fan. Being a cellar dweller in the NFL isn’t supposed to be a long-term thing, that is why the NFL draft is set up to help the bad teams get better.

Cleveland, however, seems to have found a way to be consistently the worst team in the league as this sign shows. On the plus side, this sign can be retired for this season at least.

Family, more trouble than they’re worth… 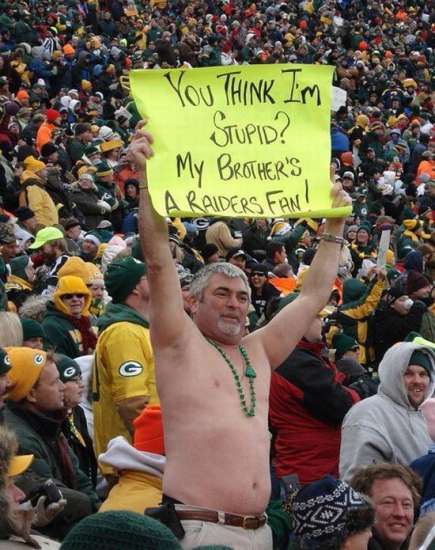 Talk about NFL loyalty. This sign/lack of clothing combination covers so many bases at the same time. Wisconsin is not exactly known for its mild winters – note the fans in their coats and hats around this brave soul – but getting on TV isn’t always about self-preservation.

Getting frostbite would be an unwanted side effect of this fan making his point, but it is totally worth it to take a jab at a team that everyone loves to hate. 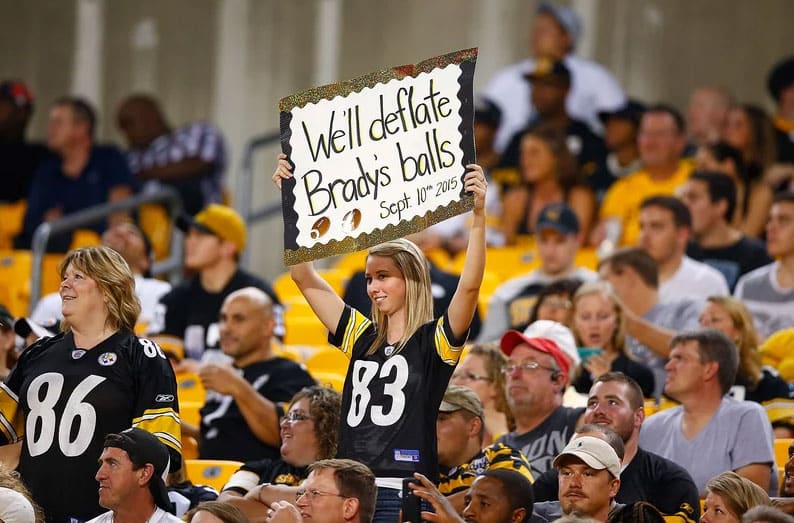 Tom Brady has long been a victim of sign culture. He is an easy player to hate, mainly because he – and his team – are just that damn good and deflategate gave fans an easy target. This is especially true for fans of teams that Brady has owned over the years, with the Steelers being one such franchise.

This is actually one of the nicer anti-Brady signs out there, with others being much more close to the bone in terms of their content.

Hit them where it hurts, right in the scandal… 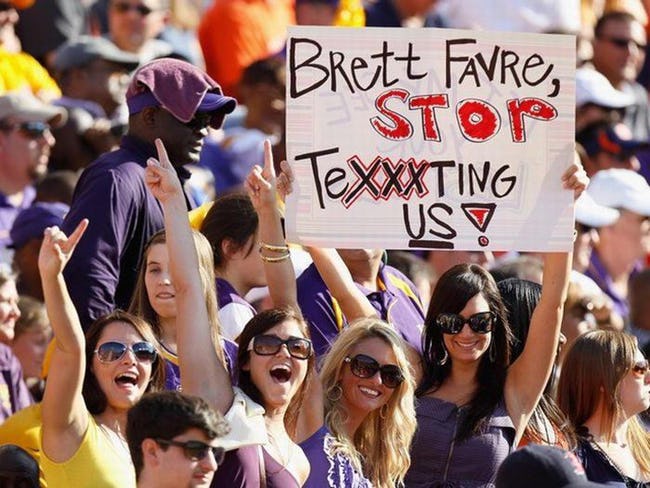 Brett Favre is another quarterback that has long had the ire of opposition fans. He then made it much easier to poke fun at him after his sexting scandal while playing for the New York Jets with Jen Sterger, one of the teams game day hosts. 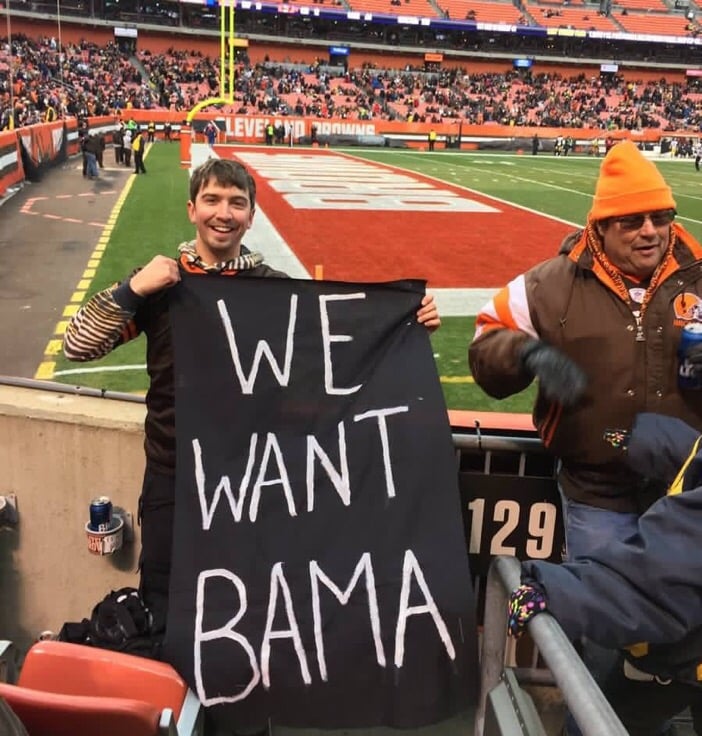 Either it is easier to create funny signs when your team is bad or all the jokesters among NFL fans live in Cleveland. This is another outstanding sign by a Browns’ fan who, sick of the futility of his team against professional franchises, challenged a college team instead.

Given how good Alabama has been under Nick Saban, we suggest the Browns should have started with lower goals. 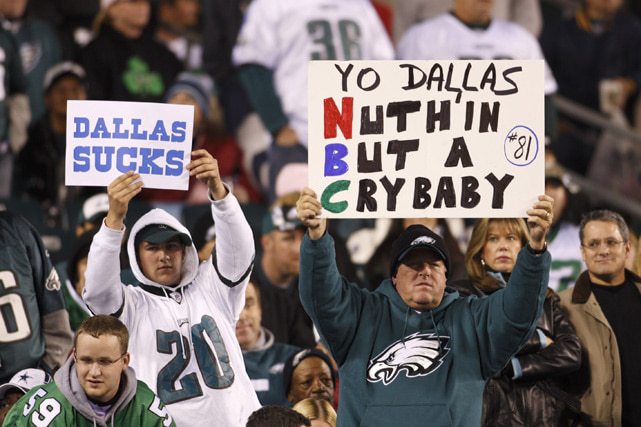 The beauty of this photo is that there are two signs with the same basic message but done in a different way. The “Dallas Sucks” sign is perfect in it’s simplicity, so perfect that you know that Dallas sucking is basically all this Eagles fan cares about.

The second sign is more thought out. The fan knew that getting the NBC part of the sign in was a must for TV exposure, then had to reverse engineer his own hatred of the Cowboys to make it fit. Well played.

Roger Goodell is a clown… 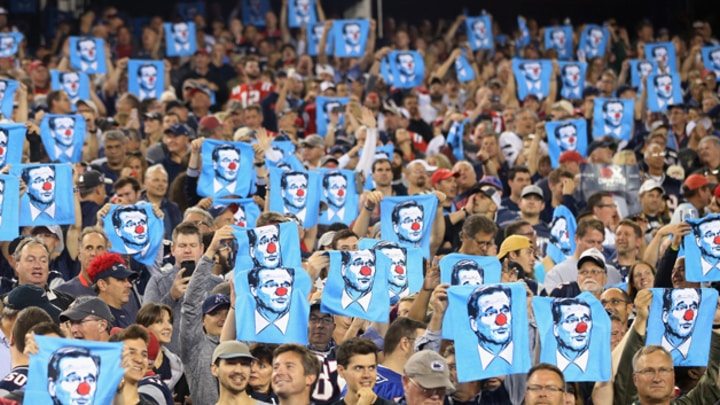 A league commisioner is always likely to irk fans of individual teams in some way or another, afterall he answers to the franchise owners above anything else. It is hard though to imagine a commissioner more universally disliked that Roger Goodell.

Patriots fans took their ire to the field with them on this day as they held up signs in unison painting Goodell as a clown for his handling of the Tom Brady Deflategate saga. 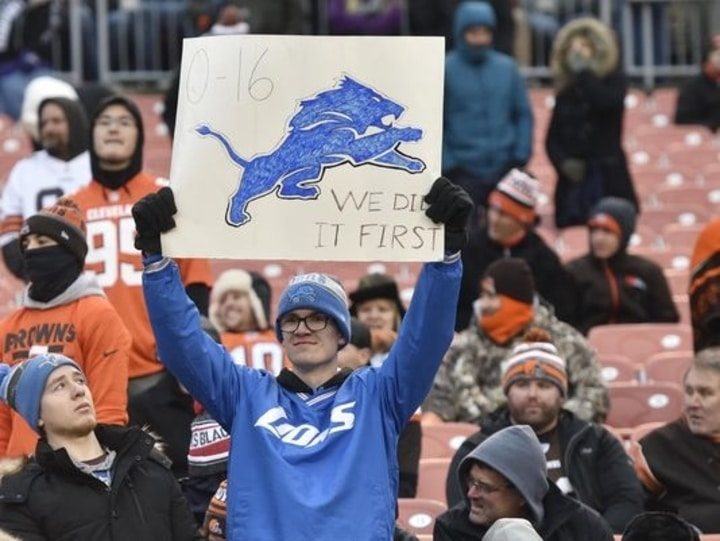 When your team has never reached a Super Bowl despite being in the league from year one, you have to look for wins elsewhere. In this case the win is the complete lack of winning, with this Lions fan proudly pointing out that the Lions were the first perfectly winless team in NFL history.

The Lions finished the 2008 season 0-16, setting a standard of haplessness that even the Browns hadn’t managed to that point.

Not everyone can be creative… 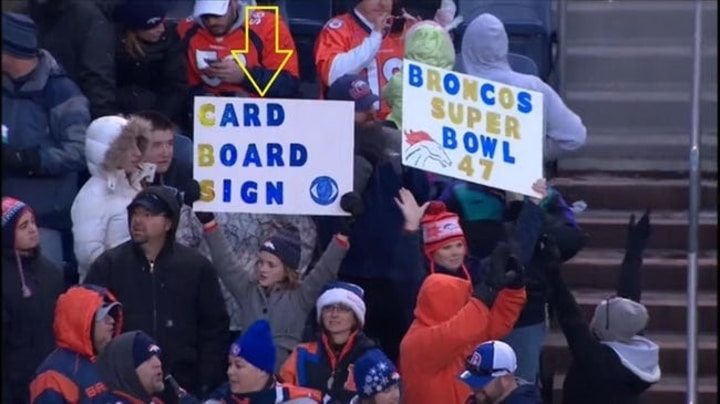 An earlier list entry showcased a reverse engineered sign that took the call letters of a TV channel and turned them into something with meaning. This sign is the exact opposite of that.

It is not even like the letters CBS would be difficult to make something meaningful out of. That is why the sheer lack of any effort at all makes this one of the funniest signs in NFL history.

Whatchoo gonna do when Pegulamania runs wild on you? 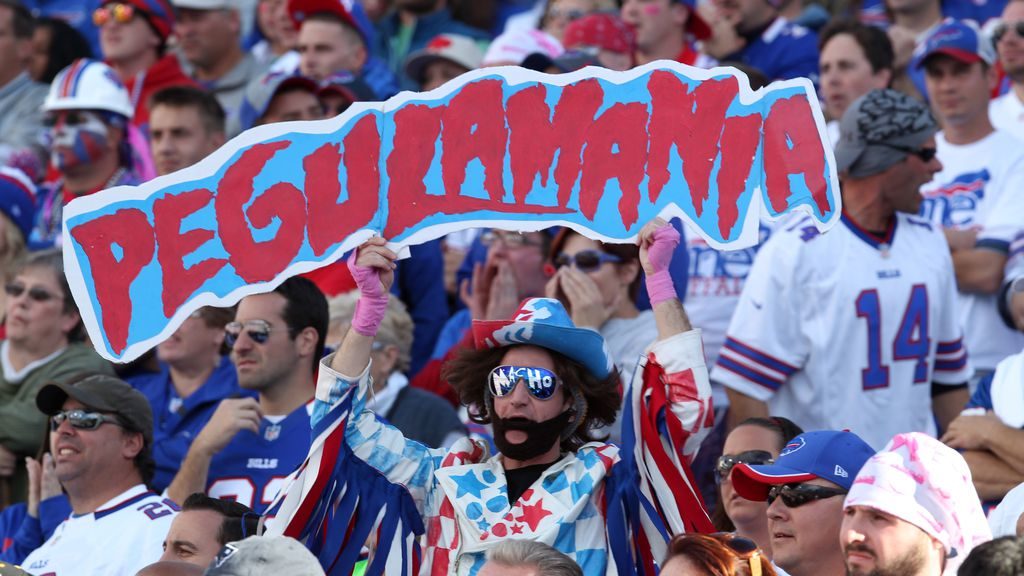 It is not often – read never – that you see a sign celebrating a team’s owner. It is even more rare that you see such a sign held up by a fan cosplaying as a WWE wrestler with the sign in the style of another.

Maybe we are supposed to get from this that new Bills owner Terry Pegula is the Hulk Hogan to this fan’s Macho Man Randy Savage, but that might be putting too much thought into it. Nice die cut job on the sign itself though. 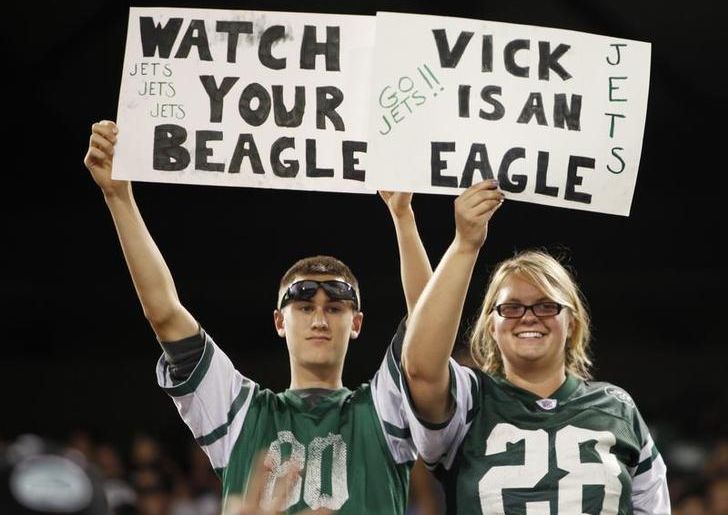 The Michael Vick dog fighting scandal was a hard one to get past as an NFL fan. While it was obviously a barbaric act that has no place in society today, it did make for at least one funny sign on the back end after Vick came back into the league.

The fact that Eagle and Beagle rhymed should have made this sign obvious, but it is still funny every time it pops up.

Who gets the signs in the divorce settlement? 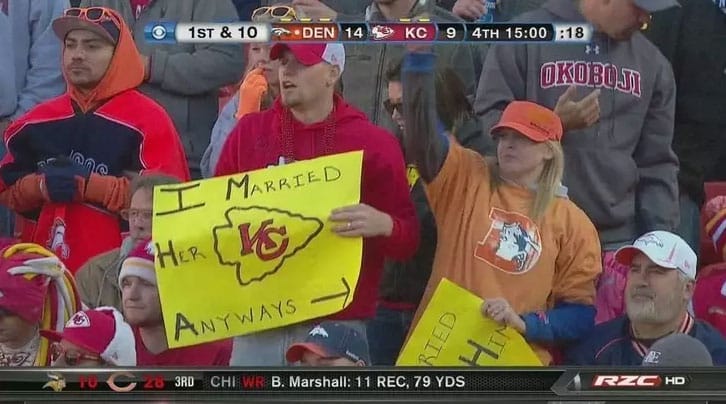 Nothing splits a household down the middle quite like the NFL. This sign is perfect because fans of all 32 teams can relate to the idea of having a spouse that is a fan of one of your greatest rivals. The result is that while the house is happy most of the time, once, twice, or perhaps even three times a year the tension is high.

When that is the case – as it is here – why not point that out on national television.