10 NFL teams already behind the eight ball to open season 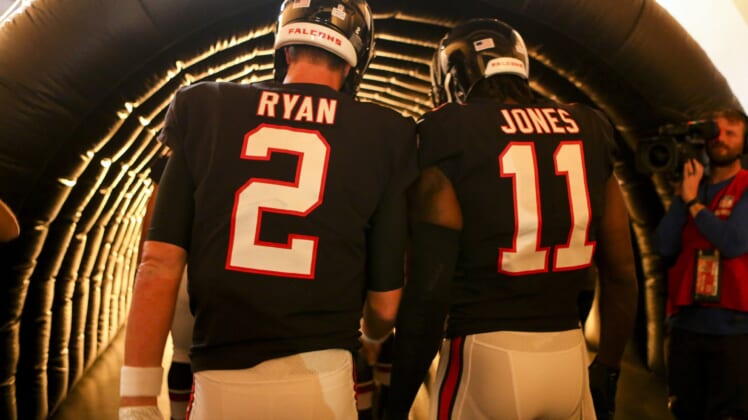 Training camps have literally just started, and already some NFL teams are behind the eight ball with difficult circumstances to overcome, for various reasons.

Some big-time suspensions have been handed down recently that have a few teams reeling. Other teams have been bitten by the injury bug. Then there are the teams that simply are facing an uphill climb in a rough division.

These 10 NFL teams are all looking at potentially rough starts to the 2019 season.

Starting left tackle Taylor Lewan is going to miss the first four games of the season after testing positive for a banned substance. That’s a brutal blow to a team that was already looking like a potential cellar dweller in 2019. Quarterback Marcus Mariota has been injury prone throughout his career, and he’s facing a make-or-break campaign in 2019. Lewan is also a key run blocker, so his impending absence is doubly painful for the Titans. With games against the Cleveland Browns, Indianapolis Colts, Jacksonville Jaguars and Atlanta Falcons to open the season, Tennessee could be looking at an 0-4 start.

There are a couple of main reasons the Bucs find themselves on this list. First and foremost, the loss of pass rusher Jason Pierre-Paul (for at least the beginning of the season) cannot be overstated as a significant detriment. He had 12.5 sacks last year and is one of the most dangerous 4-3 defensive ends in the game. Tampa Bay also has a distinct lack of bankable talent at the running back position, and will be relying on the turnover-prone Jameis Winston to keep the offense going in a positive direction. As good a coach as Bruce Arians is, these are big issues to overcome.

Heading into training camp, the big question mark facing the Seahawks was whether they had enough talent and depth up front to continue dominating defensively. Then, star defensive tackle Jarran Reed was hit with a six-game suspension for a violation of the NFL’s personal conduct policy. This is a young man who racked up 50 tackles and 10.5 sacks playing inside last year for the ‘Hawks. Losing that amount of production on a team that was already shallow at the position is a brutal blow. Seattle did sign veteran Earl Mitchell to help soften the impact. Yet he won’t be able to replace Reed.

Houston opened camp with some huge names on the PUP list, but that’s not the main reason the Texans are behind the 8-ball to open the season. Instead, it’s the way the team addressed its biggest need — the offensive line — this offseason. In particular, drafting small-school left tackle Tytus Howard in the first round was a baffling move. As it stands, Julie’n Davenport and Seantrel Henderson — two mediocre talents (at best) — are penciled in as the starters at the offensive tackle spot. Deshaun Watson is one of the best young quarterbacks in the league, but we legitimately fear for his health playing behind these guys.

Like their NFC West rival Seahawks, the Cardinals are opening the 2019 season without a star defender. Patrick Peterson — one of the best cover cornerbacks in the league — is suspended the first six games of the season for PEDs. Arizona was already facing a massive uphill climb in 2019 under the guidance of rookie head coach Kliff Kingsbury, who’s starting rookie quarterback Kyler Murray. So, despite a lot of excitement surrounding this offense, fans were already having to temper expectations. To lose a player of Peterson’s caliber, and to lose the leadership and stability he provides this team, doubles down on the impact this suspension will have on the Cardinals.

There isn’t a whole lot to this one — it’s as basic as it comes. Melvin Gordon is holding out of training camp and has threatened to hold out of games without a contract extension he feels is worthy of his talent. Gordon is one of the most productive touchdown makers in the NFL, having totaled 38 touchdowns the past three seasons. The latest reports on this contract impasse indicate the Chargers have no intention of caving to Gordon’s demands. And quite honestly, an argument can be made that Los Angeles should stick to its guns. Yet despite that, the Chargers would be hard pressed to even remotely replace Gordon is he does hold out of regular-season games.

Where to start? There are a number of big issues facing Washington here at the start of camp. Seven-time Pro Bowl left tackle Trent Williams isn’t at training camp and could hold out for a while. That’s not good news for whomever starts under center. And that situation is weird, too. It’s a three-way battle between journeyman Case Keenum, rookie Dwayne Haskins and Colt McCoy, who is still out with an injury. The defense, already without starting inside linebacker Reuben Foster (out for the year with knee injury), will wade into the 2019 season without Mason Foster (the other starter), who was stunningly cut on the day he was set to report. Dysfunctional as usual, and Washington will struggle right out of the gate in 2019.

By virtue of Andy Dalton being the undisputed starter in Cincinnati once more, the Bengals will open the season playing catch-up to the rest of the highly competitive AFC North. Throwing even more fuel on the bonfire that is a Dalton-led offense, the Bengals’ smart decision to select former Alabama left tackle Jonah Williams in Round 1 backfired immediately. He’s likely out for the season following shoulder surgery. Then there’s the simple fact that rookie head coach Zac Taylor is as green as they come, having never even had a coordinator position in the NFL before landing this job. Buckle up, Bengals fans.

On the first day of training camp, the Falcons lost two defenders to likely season-ending injuries. Backup defensive tackle Michael Bennett is out with a fractured ankle, and backup safety J.J. Wilcox is out with a torn ACL. The Wilcox injury hurts worse right now, because starting safety Ricardo Allen And Keanu Neal are both coming back from season-ending lower-body injuries suffered last year. But both injuries have to scare the heck out of the Falcons and their fans after last year’s snake-bitten season that saw multiple starters go down for the season.

For the record, history tells us that as long as Bill Belichick and Tom Brady are pulling the strings, the Patriots are going to be just fine. However, the defending champs certainly have a bunch of issues they’ll have to overcome this summer. Finding a replacement for Rob Gronkowski is first among them. His value cannot be quantified by stats alone, and there are few tight ends in the history of the league who could even match them to begin with. New England also has to find an immediate replacement for starting outside linebacker Trey Flowers, who signed with Detroit in free agency. Additionally, Mr. Reliable, Julian Edelman, is opening camp with a thumb injury and won’t be available for a few weeks.