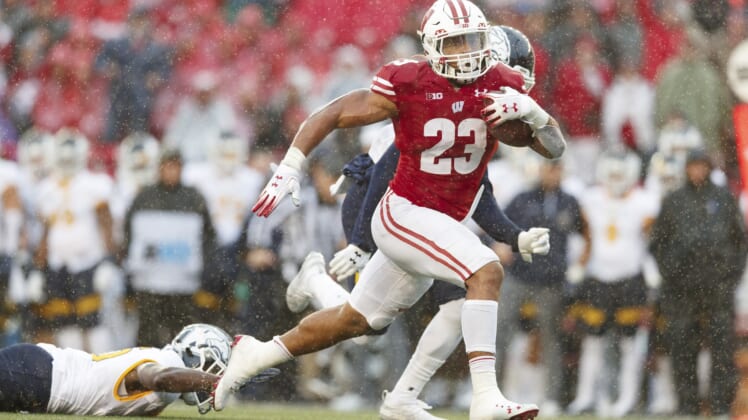 Fans across the nation witnessed some truly awe-inspiring performances around college football in Week 6 as both offensive and defensive players starred for their respective teams.

A couple of Heisman favorites only furthered their cause with electrifying performances. A trio of defensive studs caught our attention with incredible efforts for their teams as well.

These are the 10 most jaw-dropping performances from college football Week 6.

Duffy was a big-play machine Saturday. He connected with 11 different receivers, including four different players for touchdowns, passing for 424 yards. The junior quarterback also ran in a score, making it five touchdowns on the day. Better still, he didn’t turn the ball over once as Texas Tech upset the Cowboys, 45-35.

Michigan’s defensive front dominated Iowa for most of Saturday’s slugfest in Ann Arbor, and leading the charge was defensive end Kwity Paye. By halftime, he had two sacks to his credit.

Then, early in the third quarter he combined on another, giving himself 2.5 sacks on the day. The only thing that was able to slow Paye down was a hamstring injury, which he suffered in the middle of the third quarter.

Here’s how dominant Jonathan Taylor was Saturday as Wisconsin dismantled Kent State: On each of the first five drives of the game, he scored.

Taylor racked up three rushing scores and capped off an incredible first half with an 18-yard receiving score. Then, early in the third quarter, he ripped off a 48-yard touchdown to put a cherry on top of his legendary performance. Not surprisingly, that was the last action he saw in this blowout win.

All told, Taylor piled up 215 yards, along with the five touchdowns from scrimmage, in under 31 minutes of game time.

It’s extremely rare to feature a defensive tackle on this list, but what Brown did Saturday against Florida was just remarkable. The 6-foot-5, 318-pound defensive lineman was a terror inside against the Gators, and he was a part of two of the biggest plays in the game.

First, Brown came up with a fumble recovery that very nearly turned into a touchdown before he tripped himself up on the long return.

Then, in the fourth quarter, he did it again, coming up with a second fumble recovery to stop what appeared to be a scoring drive for the Gators following a Bo Nix interception on the other end. This time, he just stole the ball from Kyle Trask.

That’s some game from the big fella, who also finished with four tackles and a sack.

The emergence of Joe Burrow as one of the nation’s best quarterbacks in 2019 has been glorious to watch unfold. He already had 1,520 yards and 17 touchdowns on the season heading into Week 6, throwing four-plus touchdowns three times in four games.

On Saturday against Utah State, Burrow lit up the scoreboard once again.

Completing 27-of-38 attempts, Burrow passed for 344 yards with five touchdowns, overcoming an early interception. Oh, and just for good measure he added 42 yards on the ground along with a rushing score while leading LSU to yet another blowout win.

Not a lot of people were tuned into the game between Illinois and Minnesota in Week 6, but those that did saw some incredible stuff from the Golden Gophers’ offense. Rodney Smith carried the load and then some, sparking a brilliant 40-17 win that also featured one of the most impressive highlights of the weekend.

Toting the rock 24 times, Smith rushed for 209 yards and a touchdown. That rushing total is a career high, and it was the catalyst for the Golden Gophers starting out the season 5-0.

The Big 12 isn’t known for dominant defenders, but on Saturday Jordyn Brooks certainly was that as his Red Raiders took down No. 21 Oklahoma State. Setting the tone for what was a miserable game for the Cowboys, Brooks was all over the place with impact plays throughout.

Leading both teams with 19 tackles, including four for loss, Brooks also tallied three sacks and a forced fumble, spearheading a defensive effort that forced five turnovers and led to the upset victory.

N’Kosi Perry didn’t start for Miami on Saturday against Virginia Tech. Instead, Jarren Williams got the nod, but he opened the game with three straight interceptions, ultimately dooming the Hurricanes to a narrow loss.

However, Miami very nearly won. Perry came into the game late in the first quarter, and he also threw an interception. Then, just before halftime, he engineered a miraculous touchdown, and from there he took off.

Perry finished the game with 422 yards and four touchdowns, and he almost tied the game at the end, falling just short of the magnificent comeback thanks to some solid defense in the end zone by Virginia Tech.

This small-school receiver makes his third appearance on this list in six weeks. Omar Bayless cannot be contained, folks. Even in a losing cause Saturday against Georgia State, the 6-foot-3 senior was a veritable giant.

Catching eight passes for 154 yards, Bayless also hauled in three touchdowns. It was his second multi-touchdown game of the season and gave him 10 touchdown receptions in 2019.

Stop me if you’ve heard this before: The Memphis Tigers have an explosive running back capable of taking every ball he touches the distance for six points. Following a long line of such backs, Kenneth Gainwell had a monster game Saturday for the Tigers against UL Monroe.

Gainwell only carried the ball 14 times. That’s not a ton of work. But he made every carry count, going for 209 yards with two touchdowns.

Adding to his total, Gainwell also caught three passes for 42 yards, averaging an incredible 14.76 yards per touch in the game.