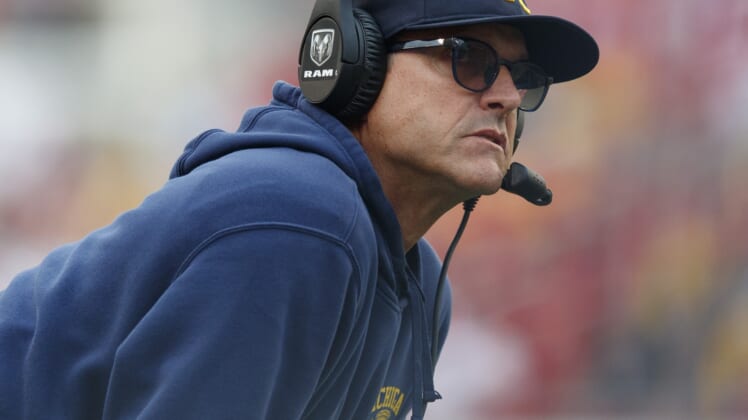 Given the amount of big-time matchups on the college football Week 4 schedule, it’s hardly surprising that a fair amount of upsets took place. Starting with Utah’s stunning loss to USC Friday night, this weekend was unpredictable and a ton of fun for fans.

Yet for everything that goes up, something must come down. That’s the angle we’re focusing on here as we examine the biggest disappointments from college football Week 4.

The Utah Utes sauntered into Week 4 with one of the nation’s top defenses and were justifiably ranked No. 10 nationally. Standout defensive tackle Leki Fotu made an early impact knocking Kedon Slovis out of the game early in the first quarter, and he was outstanding all night long.

Unfortunately for the Utes, their defensive secondary was as effective as a wet paper bag at containing backup Matt Fink, Michael Pittman Jr. and Co.

Fink passed for 351 yards and three touchdowns. Pittman routinely torched Utah’s defensive backs to the tune of 232 yards on 10 receptions, and an incredible 77-yard touchdown. USC dominated all night long.

Utah’s position in the national rankings will now shift dramatically. This embarrassing performance is also bad for the Pac-12, which once again appears to be intent on cannibalizing itself out of the playoff picture.

It was pretty stunning that Michigan (No. 11) entered Week 4 ranked higher than Wisconsin (No. 13) nationally. After all, the Wolverines were nearly beaten by Army and hadn’t looked truly impressive at any point this season. Meanwhile, Wisconsin featured a defense that had yet to yield a single point, and Heisman favorite Jonathan Taylor.

Any notion that Michigan belonged among the nation’s elite was quickly chucked out the window. The Badgers gave their rival a heavy dose of Taylor and the ground game early, and before a quarter was up the running back had 143 yards and two touchdowns — including this 72-yard lighting strike. Even when Taylor had to exit the game for much of the second quarter due to cramps, Wisconsin had its way with Michigan.

The second half was more of the same, as the Badgers pummeled the Wolverines into submission and did whatever they wanted to on the ground offensively. The end result was a humbling 35-14 blowout loss for Jim Harbaugh and Co., who’ll take a precipitous tumble down the rankings.

Tennessee is a disaster

The Volunteers were expected to lose on the road against No. 9 Florida on Saturday. Yet early on, they had a real chance to make some noise and sniff the glory of an upset.

The Gators turned the ball over on consecutive drives in the first half, setting up Tennessee with a great chance to score. Both of those opportunities were ruined by interceptions thrown by Jarrett Guarantano.

Then in the second half, Kyle Trask threw interceptions on consecutive drives, once again gifting Tennessee with prime opportunities to score. Instead, the Vols went punt, interception on their two chances.

Yes, Florida’s defense is stellar. But to see that much ineptitude was a stunning indication of just how awful Tennessee really is. The program is an embarrassment, and it’s hard to see any light at the end of the tunnel.

The Rebels had a shot to tie No. 23 Cal late in the fourth quarter. Ole Miss scored a touchdown with 4:29 left on the clock, then forced a punt on the next defensive possession. Backup quarterback John Rhys Plumlee then made an incredible throw to get the Rebels into scoring range, and it appeared they had a real chance to make the game very interesting.

That’s when the wheels fell off. Offensive coordinator Rich Rodriquez inexplicably called a running play that wasted precious seconds off the clock. Then Plumlee scrambled on the next play, wasting more time. Finally, on third-and-goal, he made a good throw but was short of a touchdown by inches to my eye, and the eyes of the officials.

The Rebels showed no sense of urgency to get to the line as the seconds ticked off the clock and ran a pathetic quarterback sneak that came up woefully short as time expired. Just an inexcusable lapse of game management by Ole Miss. Granted, the officials should have reviewed the third-down play. But the Rebels were utterly unprepared for the final moments of this game.

TCU gets run out of their own building

The Horned Frogs came into Week 4 featuring the second-ranked defense in all of college football, allowing just 209.5 yards per game and two total touchdowns in their first two games. They also entered the week ranked No. 25 with a big chance to prove they were worthy of that hype against SMU.

Apparently, the hype was not warranted in the least. The Mustangs put on an offensive clinic, piling up 406 yards in a 41-38 win as they stunned the fans at Amon G. Carter Stadium in Forth Worth.

TAMU defense made too many mistakes

Early on, it became apparent that Texas A&M’s defense wasn’t prepared for the speed and misdirection Auburn’s offense loves to utilize.

Anthony Schwartz exposed this in the first quarter with a 57-yard end-around touchdown in which he was never even touched. Then, a bit later on, Bo Nix found John Samuel Shenker in the end zone on a red-zone play, and there wasn’t a Texas A&M defender within 10 yards of him.

After halftime, the Aggies lost a fumble on their first possession, and the Tigers quickly took advantage with their third touchdown of the game. In the fourth quarter, they extended the lead to 28-13 thanks to a 12-play drive that chewed up six minutes of clock.

Texas A&M turned this contest into a nail-biter with scrappy play on both sides of the ball in the fourth quarter. But the early mistakes doomed the Aggies, who would have otherwise had a real shot to pull off an upset at home.

UCF gets off to slow start, finishes with a whimper

Pitt had a 21-10 lead at halftime and was dominating on both sides of the ball as UCF got off to an extremely slow start against an inspired Panthers defense. Then, Pittsburgh’s defense and special teams fell apart early in the third quarter and the Knights suddenly gained some much-needed momemtum.

For a while it seemed like the No. 15 team in the nation was going to cruise to victory. But late in the third quarter the offense sputtered again with three drives that ended with a punt, a punt, and a turnover on downs, allowing Pitt to hang around. After going up by six points with a fourth-quarter field goal, the Knights fell apart completely. They allowed Pitt to engineer a 12-play drive late in the fourth, which the Panthers capped off with a trick-play touchdown on fourth down that won the game.

Needless to say, there will be no talk about a national championship in Orlando.

The Razorbacks came into Saturday’s game against San Jose State as 20.5-point favorites to win. That spread wasn’t at all surprising given Arkansas hung with Ole Miss a couple weeks back and put up 55 points in a 21-point win over Colorado State last weekend.

On top of that, the Spartans were last seen getting their butts beat by Tulsa. So, it was easy to think the Razorbacks had an easy victory lined up in front of their hometown fans. That didn’t happen.

Quarterback Nick Starkel threw five interceptions, and this game was over by halftime. Not only did Arkansas lose, the Razorbacks were embarrassed.

Ever since Costello was injured in Week 1 against Northwestern, he’s struggled. He missed Week 2 with a head injury, then had a bad game last weekend against UCF before Saturday’s showdown at home against Oregon. If the Cardinal were going to have any chance of holding up, Costello had to have a strong night.

That didn’t happen. Instead, the senior quarterback had a miserable game against the Ducks, completing just 16-of-30 passes for 120 yards with no touchdowns and one brutal interception. As a result, the Ducks had an easy path to victory over a Stanford squad that now appears destined to have its first losing season in nine years under head coach David Shaw.

We knew heading into Saturday night’s prime-time battle between Notre Dame and Georgia that the Fighting Irish couldn’t afford to make mistakes. Playing in Athens against a Bulldogs team that loves to capitalize on mistakes, Ian Book and his offense needed to play a nearly flawless game.

Unfortunately, mistakes doomed the Irish. It started when Chris Finke, who had previously made the catch of the night, let a pass slip through his hands. Divaad Wilson was right behind him and made the easy interception.

That one’s not on Book.

However, early in the fourth quarter, already down by 10 points, he made a fatal mistake throwing late to the outside. J.R. Reed, who nearly had one interception earlier in the game, got this one. It led to a field goal, stretching Georgia’s lead to 13 points with just under seven minutes left.

Book led the Irish on a touchdown-scoring drive to cut the lead to six points late. But when it was all over, he and his teammates fell short.