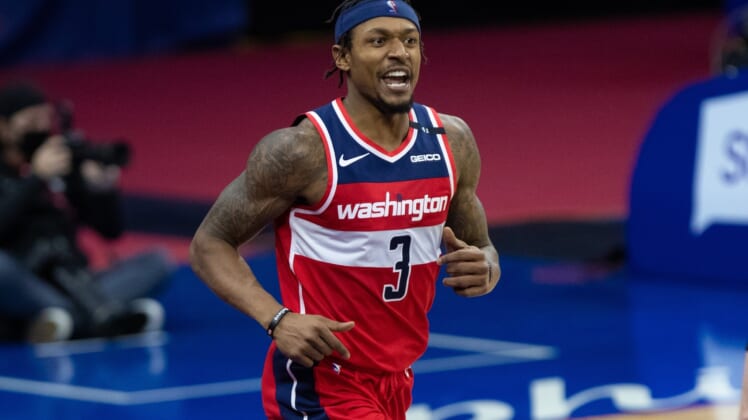 The New York Knicks have been among the most-surprising teams in the NBA this season. It led to Knicks rumors suggesting that a big trade or two could be in the cards ahead of the March 25 deadline. That was met with reality last week when New York pulled off a deal for former NBA MVP Derrick Rose.

We’re now hearing more about New York and its plans to add star power to the mix. Recent reports suggest that the Knicks are willing to trade draft picks and young assets to bring a true star to the Big Apple.

Below, we look at five ideal trade scenarios, either ahead of the March 25 deadline or moving forward into the 2021 offseason.

With $16.1 million remaining in cap space, New York can afford to take on salary. That’s no small thing given the economic reality in today’s NBA stemming from the COVID-19 pandemic. We’ve also heard rumors suggesting that both Hield and Bagley could be available despite the Kings’ recent success.

Adding Hield as a traditional two-guard to team up with Rose and impressive rookie Immanuel Quickley would be ideal. It would also enable R.J. Barrett to move to his more traditional small forward position. In return, New York offers up rookie lottery pick Obi Toppin, former lottery pick Kevin Knox, big man Mitchell Robinson and the 2021 first-round pick it acquired in the Kristaps Porzingis deal with the Dallas Mavericks.

We get it. The Washington Wizards’ brass does not want to trade Beal. The NBA’s leading scorer also isn’t prepared to request a trade. However, it’s just a matter of time before he wants out of D.C. with Washington boasting a 6-17 record and going nowhere fast.

Two teams are listed as favorites to land Beal should he be moved ahead of March 25 or during the offseason. Why wouldn’t the Knicks be able to join those squads? They have the assets in that of Toppin and potentially even Quickley to entice Washington. Heck, Barrett wouldn’t be off the table in Beal trade talks. Purely hypothetical, but moving Toppin, Quickly, Robinson and three future first-round picks to Washington for Beal could work.

Is Collins an upgrade over Julius Randle? We’re not too sure after what we’ve seen from the latter thus far this season. What we do know is that the 23-year-old Atlanta Hawks big man has All-Star upside. He’s also likely on the trade block after the two sides failed to come to terms on an extension last offseason.

An impending restricted free agent, Collins would give New York a tremendous amount of young star power to build with moving forward. He’d team up with Barrett and Mitchell Robinson to form a dynamic frontcourt trio. In return, New York offers up Toppin and a first-round pick for Collins. The team could then flip Randle for more assets down the road. It almost makes too much sense.

Knicks rumors culminate in a trade for Victor Oladipo

Recently acquired in the James Harden blockbuster, it’s not yet known how long Oladipo will be in Houston. The team took on the pending free agent as a cap filler and could flip him here soon. If so, Knicks rumors suggesting a blockbuster trade could lead us to this eventuality.

More than anything, New York would be getting a first-hand look at Oldipo and what he brings to the table before free agency starts. The cap room this team currently boasts would also likely lead to a below-market return for a Houston organization in cost-cutting mode. Perhaps, moving Kevin Knox and a 2021 first-round pick could get this done.

Despite a less-than-stellar relationship dating back to their days together with the Minnesota Timberwolves, it appears that new Knicks head coach Tom Thibodeau is interested in acquiring LaVine. It would make perfect sense in that he’d team up with R.J. Barrett to form a dynamic duo out on the wing.

As for the Chicago Bulls, rumors continue to persist that LaVine could be traded. He’s in the midst of a brilliant 2020-21 season that has seen the former top-13 pick average 28.1 points, 5.4 rebounds and 5.3 assists on 52% shooting from the field. Acquiring LaVine would take a nice haul, but it would also be a solid backup plan to a Bradley Beal trade. It’s something the Knicks brass will thing about.