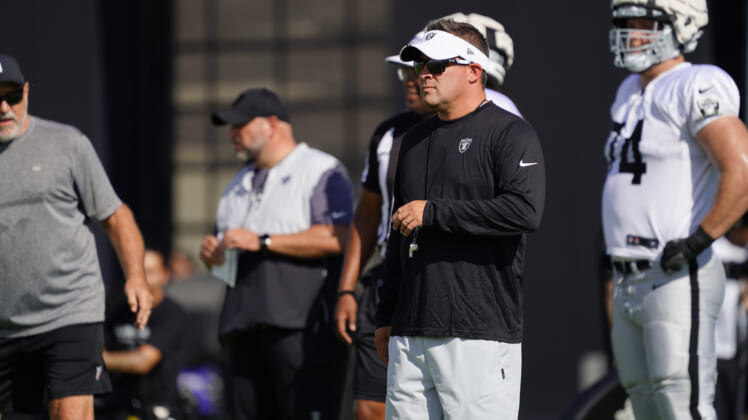 With an early start to their summer program, the Las Vegas Raiders have gone through two weeks of training camp with rookies and veterans together on the field. In two days, they’ll suit up for the Hall of Fame Game against the Jacksonville Jaguars to kick off the 2022 preseason.

Though head coach Josh McDaniels hasn’t tipped his hand about the Raiders’ plans and lineups for the regular season, the team’s practice personnel groupings give us a hint about who’s in the lead for starting jobs and which players on the roster bubble have to shot to make the final cut on August 30.

Through July, we often hear about how hard most players worked through the offseason. Several veterans headed into training camp in the best shape of their lives. Now, with padded practices and tough competition, we’ll begin to see the separation among camp bodies, backups and starters.

Thus far, no one has won a starting job in a tight competition, but front-runners have emerged at multiple positions. Young players have also taken advantage of extra reps with veterans on the sidelines. What’s the latest on the spots up for grabs? How does the roster look going into Thursday’s contest?

Through the spring, we heard nothing but good things about Alex Leatherwood and his chance to reclaim a starting role at right tackle. Yet Brandon Parker clearly has a lead on the first-string spot.

A couple of weeks ago, NBC Sports’ Peter King gave a candid assessment of the battle at right tackle when he noted that Leatherwood is “trailing” Parker in the competition. The Athletic’s Vic Tafur also noted that Parker had taken the most reps at right tackle with the starters through the first week of camp.

Raiders fans may cringe when they think of Parker in the right tackle spot. According to Pro Football Focus, he’s allowed 22 sacks through four seasons (eight last year). However, the fifth-year pro has put himself in a position to open the season with a starting job.

For now, Parker looks like the front-runner to play right tackle, which bumps Leatherwood to the bench. For the time being, the latter hasn’t taken any significant reps at right guard, which means the staff may just want him to concentrate on improvement at right tackle.

If Leatherwood loses the battle at right tackle to Parker, he probably wouldn’t beat out Lester Cotton Sr. at right guard either.

Since the spring, Cotton has been a fixture at right guard. Initially, he took over for Denzelle Good, who had been recovering from a torn ACL. Once Good retired, Cotton’s chance at making the 53-man roster as a starter grew exponentially.

This offseason, Vegas re-signed Parker to a one-year, $3.5 million deal, and Cotton spent most of his time on the Raiders’ practice squad over the last three years. Now, they’re both in line to start Week 1 against the Los Angeles Chargers.

General manager Dave Ziegler doesn’t have to make a splash out of desperation. But some of the biggest names in the free-agent pool can potentially help the Raiders because they lack depth across the offensive line and have several players missing in action on defense.

If Ziegler believes in building a football team inside out, he should add at least one player for the offensive line or defensive line. Three free agents stand out: edge-rusher Jason Pierre-Paul, defensive tackle Ndamukong Suh and right tackle Daryl Williams.

Vegas has $21.8 million in cap space. If it signs Pierre-Paul, Suh or Williams, the club would still have plenty of financial resources to cover for injuries down the line.

Williams has been a personal favorite for months because of the uncertainty on the right side of the Raiders’ offensive line. Even if the coaching staff believes in Parker and Cotton at tackle and guard, respectively, the unit still needs some depth behind them.

Rookie third-rounder Dylan Parham can back up Cotton on the interior, but how much does the coaching staff trust Leatherwood if he has to play at tackle? The 2021 first-round pick took third-team reps during Saturday’s practice behind Parker and rookie seventh-rounder Thayer Munford Jr., per Vincent Bonsignore of the Las Vegas Review-Journal.

During the spring, Suh stirred some buzz with his Twitter comment about playing for the Raiders. At 35 years old, he’s probably on the lookout for the most lucrative offer on the table, but don’t sleep on him. The 13th-year pro has recorded 48 pressures, 12 sacks and 16 tackles for loss over the last two seasons.

At 33 years old, Pierre-Paul is past his prime, but he can be effective as the third edge-rusher behind Maxx Crosby and Chandler Jones. Only two terms removed from a Pro Bowl campaign with 9.5 sacks, 22 pressures and seven tackles for loss, he may still have something left in the tank after a down 2021 season (31 tackles, three for loss, 2.5 sacks and 14 pressures in 601 defensive snaps.

Furthermore, the Raiders lost Kyler Fackrell for the season when they placed him on injured reserve last week. Like him, Pierre-Paul has played under defensive coordinator Patrick Graham, who served as his defensive line coach with the New York Giants between 2016 and 2017.

Johnathan Hankins and Bilal Nichols haven’t come off the physically unable to perform list (PUP), which gives Neil Farrell Jr. and Matthew Butler their opportunities to carve out bigger roles on the defensive line.

Because of Nichols’ contract (two years, $11 million with $7.1 million guaranteed) and Hankins’ experience, they’re probable starters on the front line. With that said, the rookies have availability in their favor, especially Farrell.

At 6-foot-4 and 325 pounds, Farrell will probably take over for Hankins at nose tackle, but that transition could happen before the season opener if the veteran isn’t back on the field in the coming weeks.

Even if Nichols returns to the action in the near future, Butler can line up in multiple spots for playing time along the defensive line. He could play defensive tackle in an odd-man front, which would push Vernon Butler into a backup role or on the roster bubble.

Butler and Farrell may both play about 60% of the defensive snaps this year. At 30 years old, Hankins may see a snap count reduction, and (Vernon) Butler hasn’t moved the needle in three years.

The Las Vegas Raiders selected Zamir White in the fourth round of the 2022 draft, but he missed some practices before his return to action Monday (h/t The Athletic’s Tashan Reed). For a rookie, every rep counts, especially in a crowded position room.

McDaniels will have several running back options with Josh Jacobs, Kenyan Drake, Brandon Bolden and White all healthy. As the rookie gets his feet wet on the pro level, expect Jacobs and Drake to take on the bulk of the carries.

Last year, under former head coach Jon Gruden and his staff, Drake didn’t establish any rhythm in the offense. His workload fluctuated before he went down with a fractured ankle. This year, the dual-threat running back should have plenty of opportunities if McDaniels doesn’t feature Jacobs in a workhorse role.

With White slowly coming along, Drake looks like the clear-cut No. 2 back with Bolden splitting third-down duties with him.

Through six seasons, Drake has done two things well: catch the ball and finish drives. He’s caught 199 passes for 1,535 yards and seven touchdowns. Between 2019 and 2020, the 6-foot-1, 211-pound tailback scored 18 rushing touchdowns (15 from within five yards of the goal). Don’t be surprised to see him finish with about 1,000 yards and eight or nine touchdowns from scrimmage this year.

On Monday, the Raiders placed Micah Kiser on injured reserve, which ends his 2022 season. He suffered a leg injury Sunday, and the team carted him off the field.

Though Jayon Brown and Divine Deablo will likely split snaps in the spot alongside Denzel Perryman, Kenny Young and undrafted rookie Darien Butler will battle for the fourth spot at linebacker.

If Butler can contribute on special teams, he’ll have a clear pathway to a roster spot. Since 2019, Young has taken just 53 snaps on special teams. The fifth-year pro has also struggled in coverage, allowing a 113.5 passer rating last season.

With strong performances through the preseason, Butler can make a case for a backup role at inside linebacker. He recorded three interceptions and three pass breakups at Arizona State last year. The 6-foot, 230-pounder may have enough instincts and coverage skills to play on all three downs.