The Las Vegas Raiders will head into the offseason looking to fill a major void at quarterback, and they reportedly could do so by going after one of the greatest signal callers the NFL has ever seen in free agency.

The Raiders (6-10) were a frustrating group in 2022-2023. Despite hiring offensive guru Josh McDaniels to be head coach, and adding Pro Bowlers Davante Adams and Chandler Jones, and getting strong seasons from Josh Jacobs and Maxx Crosby, Las Vegas was a major disappointment this season.

Some weeks they looked like a team worthy of a playoff spot and in others, they were a mess, especially on offense. That is part of the reason why they made the bold decision to bring their nine-year relationship with starting quarterback Derek Carr to an end after Week 16.

Now, this win-now roster needs a new starting QB and it looks like the organization is seriously considering Tom Brady as a short-term answer to the problem.

During an appearance on the “Dan Patrick Show” last week, NFL insider Albert Breer spoke about the Las Vegas Raiders’ strategy to fill the QB spot in the offseason, and it seems that along with 49ers veteran Jimmy Garoppolo, the team is looking into making a run at soon-to-be free agent, and seven-time Super Bowl champion, Tom Brady.

“That’s what Derek Carr was up against the last couple of months. When they looked at him and said, ‘Ah, I don’t know if this gonna work passed this year,’ that Carr was sort of thrown into a defacto competition. With Garoppolo and Brady, and [the thinking] ‘Can we do better? Is there something we can do to get more out of that position?'”

Brady is not expected to re-sign with the Tampa Bay Buccaneers following the conclusion of this season. Breer also mentioned the team needs to figure out if this roster is good enough to make, possibly, a one-season run for a title with Brady. However, this is also not the first time the Las Vegas Raiders have shown serious interest in the 45-year-old NFL great. 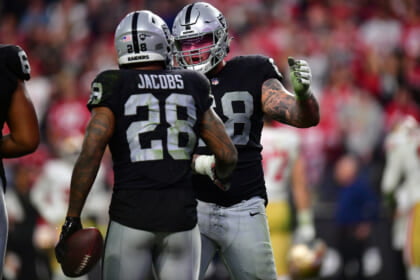 Also Read:
Las Vegas Raiders: What it will cost to keep Josh Jacobs

When the New England Patriots icon hit the open market in 2020, the Silver-and-Black reportedly pursued him and even had UFC President Dana White involved to try and persuade the 15-time Pro Bowler to bring his talents to Las Vegas.