The Green Bay Packers moved up for Jordan Love in the 2020 NFL Draft hoping he could be the future face of the franchise. A year later, the team narrowly avoided a disastrous Aaron Rodgers exit and Love still isn’t where the team wants him to be.

Green Bay traded up to select Love with the 26th pick, a move that received a fair share of criticism from NFL executives and scouts. Almost immediately, a quarterback prospect who everyone viewed as a project for a coaching staff started behind schedule.

Due to the COVID-19 pandemic, the NFL wiped out rookie minicamp and training camp didn’t begin until late in the summer. Not only did Love lose those crucial reps, but a suspended preseason eliminated any opportunity to see the field. Love spent the season as Green Bay’s No. 3 quarterback and lost a crucial year in his development arc.

When Rodgers didn’t report for minicamp, the Packers could finally see their 2020 first-round pick in the spotlight. Early this spring, general manager Brian Gutekunst said Love has ‘a long way to go’ in his development and reports surfaced of the 22-year-old struggling in practice. 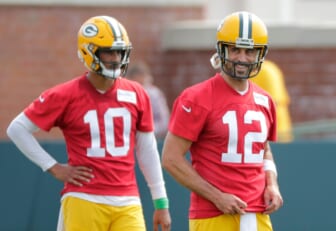 When Rodgers returned, it eased the pressure off Love. But the Packers still wanted to get reps for their quarterback heir. While Love showed some positive signs in his first preseason game, NBC Sports’ Peter King shared Monday that Love still isn’t erasing all doubt.

“(Love) hasn’t wowed the team. Good days, shaky days. But I’d be cautious about saying the 26th pick in the 2020 draft is in trouble. Rodgers, the 24th pick in 2005, had more than his share of lousy moments in years one and two behind Brett Favre. Love’s decision-making must improve. But some quarterbacks take more nurturing than others.”

King noted that months after Gutekunst said the organization doesn’t believe Love is ready to start, they still believe that. It might also explain why Green By agreed to restructure Rodgers’ contract, doing whatever it took to get the reigning NFL MVP back.

Love doesn’t have to be ready right now, that’s where the Packers are fortunate. But a year after trading up for a quarterback who many saw as a Day 2 talent, there also isn’t the level of internal confidence you’d expect from an organization.

Rodgers will decide his fate in 2022, either sticking with the Green Bay Packers or being granted a trade. If he departs, the Packers might need to consider a real backup plan behind Love.