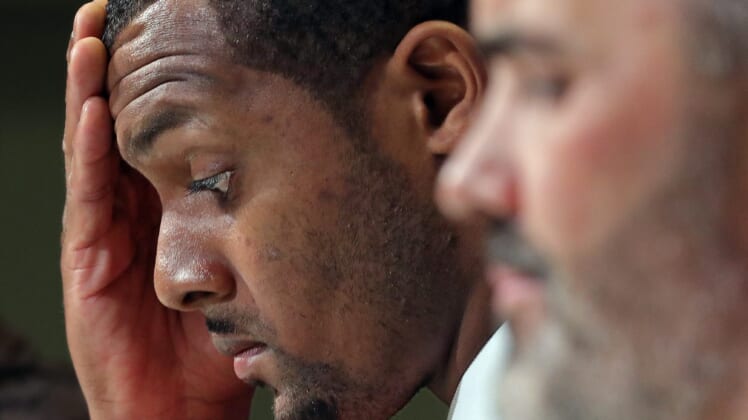 New Cleveland Browns quarterback Deshaun Watson might have avoided criminal prosecution stemming from the north of 20 women accusing him of sexual misconduct.

Even then, Watson is still the defendant in 22 civil cases related to allegations of misconduct.

Once a grand jury in Harris County, Texas, opted against recommending criminal charges against the Pro Bowl quarterback, multiple NFL teams jumped at the idea of acquiring him from the Houston Texans.

In the end, Watson ended up with Cleveland.

As that entire process was playing out, the quarterback was also called upon to give depositions in the civil cases. We now have some video of these depositions. To say that they are not a great look for Watson or the Browns would be an understatement.

The attorney for the women claiming misconduct/assault on the part of Deshaun Watson, Tony Buzbee, was at times confrontational in the leaked desposition. That’s not a surprise.

However, Watson’s responses and the revelation that he did not tell the Texans about these massage appointments has to be considered telling.

In particular, the revelation that Watson allegedly posted on social media that he was in New York City at the same time the Pro Bowl quarterback was getting a massage in Texas is damning.

One other aspect of the deposition stands out, too. Watson admitted he had no idea whether these masseuses were trained or licensed in the field. Why put yourself out like that? Either way, we recommend you watch the entire video and draw your own conclusion.

Related: What to expect from Deshaun Watson on the Cleveland Browns

The Browns’ press conference announcing their acquistion of Watson this past Friday was not a great look. It didn’t seem like either the quarterback or the organization prepared for the onslaught of questions that were going to be headed their way by the media in Cleveland.

At one point, Watson referenced his upbringing in denying that he’s ever disrespected a woman.

“I understand these allegations are serious. I never assaulted any woman. I’ve never disrespected any woman. I was raised to be genuine and to respect everyone around me.”

Somehow, Watson wants us to believe that he wouldn’t disrespect a woman because he was raised by a single mother and two aunts.

Regardless of everything, Watson has not been charged (and won’t be charged) in criminal court. He’s obviously innocent until proven guilty. Even if the civil cases conclude in a manner that makes him look bad, this still rings true.

In no way does that mean Watson is free from the dogma of being an accused sexual predator. The NFL operates under the guise of its own jusice system and could still very well opt to hand down a lengthy suspension in the direction of Watson.

“Any transaction would have no effect on the NFL’s ongoing and comprehensive investigation of the serious allegations against Deshaun Watson. Nor would it affect his status under the Collective Bargaining Agreement and the Personal Conduct Policy.

With the NFL still investigating Watson, videos of these depositions becoming public record is not going to paint him in the best of lights when it comes to the powers that be in New York City. That’s for sure.

As for the Browns, they yielded three first-round picks and change to Houston for Watson while handing the quarterback a record-breaking $230 million guaranteed in cold hard cash.

The organization knew that had to come with risk, including further information surfacing relating to the allegations against their new franchise quarterback.