Odell Beckham, Jr. is one of the most intriguing players on the NFL free-agent market in 2022. In 12 regular-season and playoff games with the Los Angeles Rams, the three-time pro bowler reinvigorated his damaged reputation. The superstar talent that he once showed with the New York Giants seemed to return as a part of the Super Bowl-winning squad.

Unfortunately for the man known as “OBJ,” he suffered an ACL tear in his left leg during the first half of Super Bowl LVI. It was the second time he tore that particular ligament since 2020. In a matter of minutes, he went from a player that scored a touchdown in the biggest game of the year, and had skyrocketing value, to a free agent who may not be ready for the start of the season.

After tearing the same ligament twice, there will certainly be some trepidation from teams over handing out a big contract to the LSU alum. Nevertheless, he is too talented for teams in need of a passing punch to not come calling. Here are three ideal landing spots for “OBJ.”

The Kansas City Chiefs have a massive hole in their wide receiving corps following their trade of superstar Tyreek Hill to the Miami Dolphins. This isn’t to say that Beckham, Jr. can fill that void, especially coming off a second ACL tear. However, there are big benefits for both sides in a possible deal.

If Beckham, Jr. is willing to play on one of the best offensive shows in the league on a prove-it one-year deal, he could be slowly built back up to full health and into a big-time free agent in 2023. And if Beckham, Jr. can return to the player he was late in the 2021 season, he would be the perfect weapon for Patrick Maholmes and KC’s high octane offense. All big ifs, but on a one-year deal it is worth the risk.

Beckham, Jr. returning to the Cleveland Browns would have seemed completely out of the question a month ago, but things change in the NFL pretty fast. With the team now having former Houston Texans star QB Deshaun Watson in tow, they are for a more appealing option with Baker Mayfield out of the starting signal-caller job.

The new Super Bowl champ even recently admitted that he would be open to a return to Cleveland. The big question is what are the Browns’ interest in a reunion after cutting Beckham, Jr. during last season. If he were willing to take a deal that was beneficial to the team’s cap space, Watson throwing passes to Amari Cooper and Beckham, Jr. in 2022 sounds very good.

While the Raiders are the second-highest betting favorite with Maxim Bet, the top choice, with a strong -333 odds, is the Los Angeles Rams. “OBJ’s” tenure in LA was short but a return to the team he helped get to Super Bowl LVI makes a lot of sense. 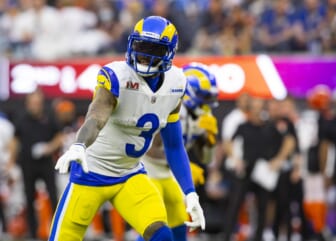 For the star wideout, there has to be a sense of unfinished business in not being able to finish the job after tearing his ACL in the NFL title game. Plus, the Rams were able to aid him in reaching the heights he once had playing for the Giants. A reunion feels right, however, with the team $20 million over the salary cap, his ACL tear could force them to pass on a second season with Beckham, Jr.