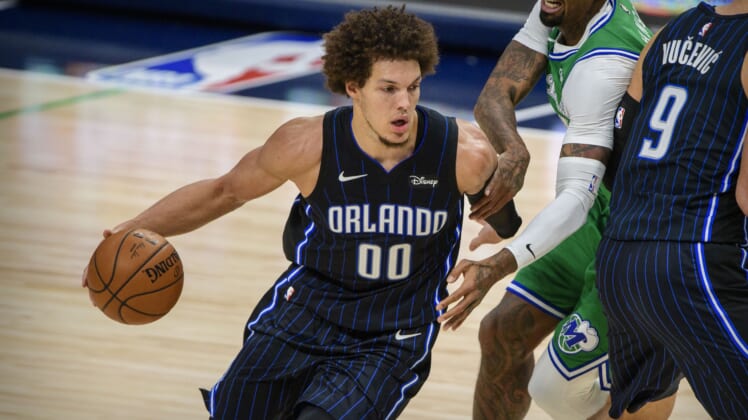 The Denver Nuggets pulled off arguably the savviest trade prior the NBA’s deadline for deals on Thursday when they acquired Aaron Gordon from the Orlando Magic.

All the splash trades were coming out of Orlando, as the Magic traded Nikola Vucevic to the Bulls, dealt Evan Fournier to the Celtics and capped it off by shipping Gordon away.

ESPN’s Adrian Wojnarowski reported the details of Gordon’s trade to the Nuggets, which features an impressive haul for Orlando:

That’s right. Three players and a first-round draft pick. Not that the draft selection is going to be particularly high, but the Magic can move forward with tons of assets to flip later as they try to figure out how to be a factor in the East.

Meanwhile, out West, Gordon gets the change of scenery he’s desired and can actually play meaningful basketball with a shot at a championship, joining one of the NBA’s best core of players in Denver.

Aaron Gordon is the defensive stopper the Nuggets desperately needed

Shout out to Denver head coach Michael Malone, who’s gotten his squad to make strides of late on defense. However, that’s more a product of collective effort, chemistry and willingness to buy in, because the Nuggets were downright bad on the defensive end.

Since a 12-11 start, Malone’s squad has gotten it together, overcame injuries to several players and are now fifth in the West with a 26-18 record. Even with that improvement, though, Denver still finds itself ranked 17th in defensive rating.

In the Orlando bubble, everyone in the NBA world was shocked when Denver rallied from 3-1 down against the Los Angeles Clippers to secure an improbable Conference Finals berth. The Nuggets ran out of gas against the eventual champion Los Angeles Lakers, though, and didn’t have the chops on defense to hang.

Gordon changes all of this, as ESPN Stats & Info highlighted:

He and Michael Porter Jr. are both capable of playing the 4 but can also guard the best perimeter players on opposing teams. While Porter is still working to find his potential and is more of an all-around offensive threat, Gordon can take pressure off him defensively.

Getting faster and more dynamic in the frontcourt was of paramount importance for the Nuggets, who are built around center Nikola Jokic and his unique, finessed skill set. Gordon has always been a big of a square peg in a round hole in Orlando, but since Denver has a clear need for him and gave up a lot to get him, there’s a clear plan in place for how best to maximize his strengths.

There’s such an embarrassment of riches in terms of younger talent on Denver’s roster that it could afford to part ways with players like Gary Harris — once thought to be a foundational piece to a championship puzzle — along with R.J. Hampton.

Hampton was a first-round pick in the 2020 NBA Draft and didn’t play college basketball, opting to play overseas to gain professional experience instead once he left high school. He was a highly touted recruit who has loads of upside, so really, the Magic are getting two first-rounders and have a good chance of hitting big on Hampton already.

Next offseason, Harris will be a free agent, but until then, he should be a decent replacement for Fournier in Orlando and be motivated to prove himself in a contract year.

While Gary Clark isn’t much of an intriguing player for the Nuggets to receive in return, they certainly know how to cultivate young talent better than just about any organization in the NBA. Losing Harris and Hampton hurts, but gaining Gordon is well worth it.

While Harris and Hampton could’ve contributed somewhere down the line in Denver, the team has hit on enough draft picks to forgo its perpetual long view and focus on winning now.

Because of that brilliant playoff run, the Nuggets are ahead of schedule, but now they have a legitimate fourth star in Gordon to pair with Jokic, Porter and point guard Jamal Murray to form one of the premier quartets in the NBA.

After landing Gordon, there’s no question Denver won the NBA trade deadline. You can bet no one in the West wants any part of these Nuggets once the playoffs roll around.