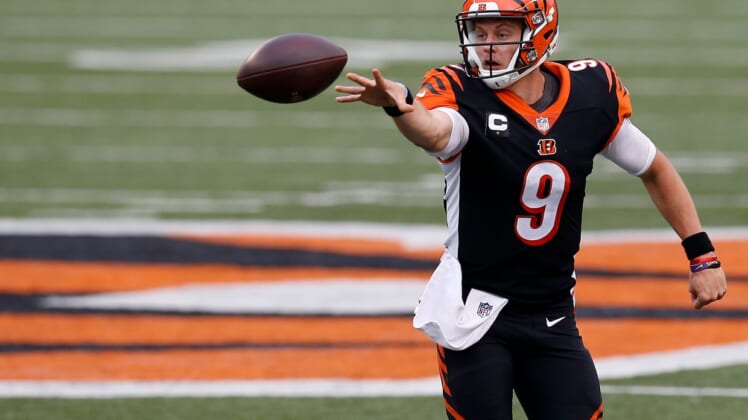 With the first week now in the rear-view mirror, we get to look ahead to NFL Week 2 odds and point spreads. To be blunt, a lot has changed over the course of the past several days around the league.

Despite a Week 1 loss, rookie No. 1 pick Joe Burrow and the Bengals looked darn good. They’ll open up Week 2 against a Cleveland Browns squad that was torched by the Baltimore Ravens in its opener. That game will open the second week of the season.

San Francisco was without rookie first-round pick Brandon Aiyuk and No. 1 receiver Deebo Samuel in last week’s loss to the Cardinals. George Kittle will miss Week 2. While the 49ers should be able to handle New York without much of an issue, the over/under here seems a bit high taking all of that into account.

Buffalo’s top-notch defense yielded just 52 rushing yards and forced two turnovers in last week’s win over the New York Jets. Miami’s three-headed monster in the backfield went for 69 total yards on the ground. If the Bills force Ryan Fitzpatrick to beat them in the pasing game, that four-point line seems a bit generous for Miami.

We already know that Aaron Rodgers torched the Vikings’ defense last week. That wasn’t a huge surprise. Mitchell Trubisky’s three touchdown performance in the fourth quarter of last week’s comeback win over Detroit was surprising. Before that, Trubisky had tossed three touchdowns or more seven times in his career. What do think that says about Rodgers’ prospects in Week 2?

Including last week’s two-interception performance in his debut as the Colts’ starter, Philip Rivers has tossed multiple interceptions in five of his past eight starts. These picks doomed Indianapolis against a bad Jaguars team in Week 1. It’s hard to pick a quarterback who struggles with turnovers at this late stage in his career.

One has to wonder if Tom Brady’s lackluster performance in Week 1 will have wide-ranging ramifications in Tampa Bay. Bruce Arians seemed to call him out a lot after the six-time Super Bowl champion threw two interceptions in his Buccaneers debut. Will there be drama in Tampa Bay this week with the Bucs as heavy favorites?

Philadelphia was without seven Week 1 starters due to injury. After opening up a 17-0 lead, the team fell to a bad Washington squad by the score of 27-17. Miles Sanders is still banged up. Carson Wentz did not have protection against Washington. It’s something to look at with Philly -1 against a Rams squad that defeated Dallas in Week 1.

Gardner Minshew made history in last week’s upset win over the Colts. The second-year quarterback completed 19-of-20 passes for 173 yards with three touchdowns and zero interceptions. No other quarterback has completed that high percentage of passes (95) on 20 or more attempts in a season debut. Beware, 10.5-point spread. Minshew mayhem NFL has definitely impacted these NFL Week 2 odds.

Despite the loss to Seattle in Week 1, Falcons quarterback Matt Ryan threw for 450 yards. This included completing 9-of-12 passes to three different receivers in that of Julio Jones, Calvin Ridley and Russell Gage (combined 27 catches). The 53.5 total might actually be low for this game.

Pittsburgh’s vaunted defense hit Giants quarterback Daniel Jones eight times and forced two interceptions in last week’s win over New York. Defensive tackles T.J. Watt and Cam Heyward were the two who came up with an interception. That’s a franchise record. Those buying Drew Lock should be on alert.

The 21 points Chicago scored in the fourth quarter against Detroit last week was north of two more than they averaged per game last season. In fact, the Bears scored less than 21 points 10 times in 2019.

The Cardinals’ win over San Francisco was their first September victory since Week 2 of the 2017 season. Arizona had lost nine consecutive September outings. Meanwhile, the Washington Football team lost all four of its September games in 2019. Who will continue to buck the trend in Week 2?

Dating back to last season, Kansas City is averaging 36.4 points in its past five games. Patrick Mahomes has tallied 16 total touchdowns and three interceptions during that span. The Chargers allowed rookie quarterback Joe Burrow to complete 64% of his passes in his debut last week.

Lamar Jackson was brilliant in last week’s blowout win over the Browns. He’s now put up north of 1,200 total yards in his past three games dating back to last season. As for the Texans’ defense, they have given up 377 or more yards in each of their past eight games. This 50 over/under seems pretty questionable unless Deshaun Watson does nothing on offense.

Following a brilliant four-touchdown performance in last week’s blowout win over Atlanta, Russell Wilson has now accounted for 16 touchdowns compared to zero interceptions in his past six September starts. He’ll be taking on a Patriots defense that has given up 46 total points in its last six September games. Something has to give. Just take the under.

Last week’s 34-point performance in a win over the Panthers represented only the fourth time that the Raiders have scored 30-plus points since Jon Gruden took over as head coach back in 2018. Postseason included, Dennis Allen’s Saints defense has given up 30-plus points four times since Sept. 23 of 2018.

Bengals kicker Randy Bullock suffered a calf injury in Week 1 that led directly to him shanking a would-be game-tying field goal in a narrow loss to the Los Angeles Chargers. This is something to keep an eye on given how close Thursday night’s game and with it coming on a short week.