Said violation would normally have resulted in a suspension or a fine. Interestingly enough, the NBA released a statement attempting to put an end to the controversy on Monday.

“To clarify any remaining misconception, LeBron James briefly attended an outdoor event last week where participants were required to be vaccinated or return a negative test result,” the statement read. “Under these circumstances and in consultation with medical experts, it was determined that his attendance did not create risks related to the spread of COVID-19 and therefore no quarantine was necessary.” 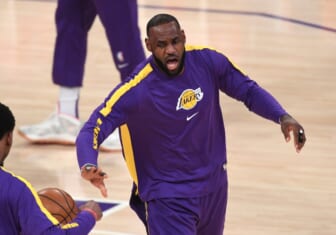 The NBA did not indicate whether LeBron James provided a negative COVID-19 test or a card to show he is vaccinated. For his part, the reigning NBA Finals MVP has refuses to discuss his stance on being vaccinated.

Now, in what has to be seen as a sign of the NBA’s LeBron James hypocrisy, Dallas Mavericks big man Kristaps Porzingis was fined $50,000 on Tuesday for violating the aforementioned COVID-19 protocols.

“The NBA just fined the Mavericks’ Kristaps Porzingis $50,000 for violating the rule prohibiting players from going into any bar, club, lounge, or similar establishment, regardless of the player’s vaccination status,” Marc Stein of The NY Times reported on Tuesday. “The league said Porzingis violated the rule when he attended a club on May 23 and announced that ‘based on all facts and circumstances, it was determined that his attendance did not create risks related to the spread of COVID-19 and therefore no quarantine is necessary.'”

It’s pretty much the same company-line statement the NBA released when it opted not to fine LeBron James. Without knowing the full details of each incident, this smells pretty bad. The Association touched on that when pressed for an answer from media members.

“While we understand the inclination to compare this incident to protocol violations by other players, including LeBron James, those facts are very different,” the league responded in a statement.

Expanding on the statement, the NBA noted that LeBron James “briefly attended an outdoor event related to an individual commercial activity where everyone was either required to be vaccinated or return a negative COVID-19 test.”

That’s all fine and dandy. But with the pandemic being prevalent for well over a calendar year, we know that science tells us negative COVID tests isn’t a guarantee that an individual is free of the virus.

Regardless, picking and choosing who is fined or suspended on an individual basis when violations of the NBA COVID-19 protocols are under the same umbrella makes no real sense.

LeBron James is the face of the NBA. I fully understand that. He plays for the defending champion Los Angeles Lakers who are in the midst of a playoff run. That’s fine. But to have a different set of rules for King James compared to others doesn’t make much sense. This Kristaps Porzingis $50,000 fine adds another layer to that.

It’s certainly something that the NBA and commissioner Adam Silver should speak to without providing a company-line statement.