If the San Francisco 49ers actually made a Deebo Samuel trade this offseason, oddsmakers believe there are four teams that have the best odds of landing the All Pro’s services.

The last few weeks have seen some interesting developments between the 26-year-old star and the 49ers. Last week he unfollowed his current employer on social media and removed all mentions of them on his accounts. That was certainly an odd move and made fans and media wonder if they smelt smoke from a possible fire.

Days later, that smoke came up over the horizon as Deebo Samuel seemed to suggest on social media that he expects to make no less than $25 million per season, once he becomes a free agent next winter. The South Carolina University alum is in the final year of a rookie contract which will pay him just under $4 million in 2022. Small change for a player who racked up 1,405 receiving yards and six touchdowns working with a quarterback the team doesn’t want to be the starter anymore.

The apparent divide between the player and team unveiled on social media has led to speculation that the 49ers could try and trade Samuel before this season if they can’t agree on a contract extension. And it seems that betting site Oddschecker has laid down lines for which teams are the strongest candidates to land Samuel in a swap.

At the top of the list with +400 odds are the New York Jets. “Gang Green” made a strong effort to land former Kansas City Chiefs superstar Tyreek Hill when he was available, but ultimately he landed with divisional rivals in the Miami Dolphins instead. The franchise has serious draft capital — two first-round picks this month — and cap space to make a move for major talent. 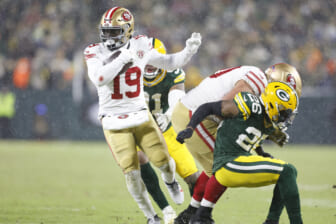 Also Read:
Deebo Samuel trade to the Green Bay Packers, how it might look

The site claims the team with the second-best chances are the Indianapolis Colts at +600. The Colts don’t have the same value in the draft as the Jets — since they are without a first-round pick in 2022 — but they do have the second most available cap space in the league with over $21 million.

In case you were wondering, the Atlanta Falcons and New Orleans Saints had the next best odds at +800 each.