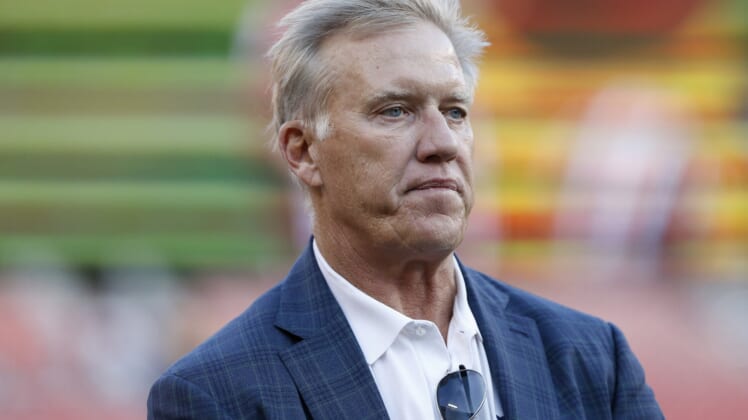 NFL Drafts are defined by those running front offices around the league. Decision makers at the top of the annual event can change the entire landscape of the draft.

That’s no different this season. Two front office figures in the Bay Area, Jon Gruden and John Lynch, are true wild cards. The same can be said about John Elway in the Mile High City as well as embattled Giants general manager David Gettleman.

From a player perspective, the quarterbacks are going to have a lot to say about how this draft plays out. It’s in this that we look at 10 true wild cards for the 2019 NFL Draft.

Recent suggestions are that Haskins has dropped a ton leading up to the 2019 NFL Draft. We’re not buying that too much. It’s likely more about teams putting themselves in position to land him in hopes that the Ohio State product falls on to their laps.

What we do know is that it’s now highly unlikely that Haskins goes within the top-two picks. After that, there’s a possibility a team trades up with the New York Jets at No. 3 to land him. Haskins is a true wild card in that where he lands will impact the remainder of Round 1 when it comes to the quarterback position. Should he go within the top-three, there will be a trickle-down effect.

Gruden has been nothing less than a wild card since taking over as the Raiders’ head coach and de facto general manager last winter. Even with Mike Mayock on board as GM this April, there’s absolutely no reason to believe that will change. Oakland boasts three first-round picks, incuding the No. 4 overall selection.

Recent reports indicate that Oakland could very well be looking to move up into the top two to land either Kyler Murray or Nick Bosa, using its draft capital as bait for either the Cardinals or 49ers. Given that the Raiders have been linked to Murray, this is no surprise. A blockbuster move up into the top two would dramatically alter the remainder of Round 1 come Thursday evening. Just think about Derek Carr suddenly being made available.

People are really split on Metcalf after he dominated competition during the 2019 NFL Scouting Combine earlier in the year. Some have the big-bodied receiver as a top-10 lock. Others are not so sure he’s even the top pass catcher in the draft. The range of views here certainly makes Metcalf a major wild card.

What’s even more interesting is the fact that this receiver class appears to be stacked. A.J. Brown, N’Keal Harry, Hakeem Butler, Deebo Samuel and Marquise Brown are all seen as potential first-round picks. Should Metcalf go within the top 10, it will increase the number of receivers that come off the board in Round 1. Should that happen, we’ll see a flurry of trades at the end of Day 1.

The Giants were not interested in adding a quarterback until they were. This team thought Kyler Murray was too small to play quarterback before ultimately deciding to visit with him prior to the draft. The backdrop here is New York boasting two first-round selections after the blockbuster Odell Beckham Jr. trade.

Flush with that additional Day 1 pick and a second third-round selection, the Giants can make a lot of noise if they decide to move up from the sixth spot. A lot of this will depend on whether Arizona actually takes Murray No. 1 overall. It will also be interesting to see if the 49ers are open to moving down from two (more on that later).

After dominating for three seasons with the Cougars, Oliver is the perfect example of “experts” over analyzing him as a prospect. He’s in the mold of both DeForest Buckner and Aaron Donald as a potentially dominant interior pass-rush threat. Nothing Oliver has done during the pre-draft process dispels this notion.

Despite this, Oliver is no longer considered at the same level of Alabama defensive tackle Quinnen Williams. Does this mean he slides outside of the top 10? We’re not terribly sure. But if that were to happen, a team would be getting a major steal in Round 1. That makes Oliver a true wild card.

Pretty much the only running back garnering Round 1 hype, Jacobs has been a divisive prospect leading up to the draft. He might not have breakaway speed or an ability to be an elite-level pass-catching back. That’s fine. But Jacobs strength and ability to run between the tackles has to be seen as a great fit for teams running a power-blocking scheme.

That’s where this gets interesting. About half of the NFL will not be in on Jacobs early in the draft. Those teams value more of a zone-blocking scheme. But there are old-school squads out there willing to go with this hefty back early. Where Jacobs lands will tell us a lot about how Rounds 2 and 3 play out in what is a deep class at running back.

The idea that San Francisco will run to the podium to select Nick Bosa No. 2 overall should Murray go first to Arizona isn’t as clear cut as it seems. Lynch and Co. have expressed a willingness to trade down from that spot. Given that the team added Pro Bowl pass rusher Dee Ford in a trade with Kansas City back in March, that’s magnified even further.

Bosa might not be a franchise quarterback, but teams are valuing EDGE rushers at a higher clip than ever before. Could San Franciso be enticed into a trade down, picking up more selections in the process? If that ultimately ends up happening Thursday night, the entire first round would be thrown for a loop — making Lynch a true wild card.

He’s going No. 1 overall. Etch it in stone. Bet the house on it. It’s happening. Whether this is media spin or actual news coming from the Cardinals’ headquarters in the desert remains to be seen. But there certainly seems to be a lot of truth to this idea.

If Arizona does take the reigning Heisman winner at the top of the draft, it changes the entire dynamic at the quarterback position. Last year’s top-10 pick, Josh Rosen, would then be traded later in Round 1 — setting up a changing landscape for Dwayne Haskins. If he’s not selected with the first pick, this means multiple teams would be willing to offer the house to San Francisco for No. 2 overall. Talk about a major wild card.

Let’s assume for a second that Nick Bosa and Josh Allen are the first two EDGE rushers off the board. Let’s also assume they go within the top-five picks. In and of itself, that would create a trickle-down effect of epic proportions.

This class is absolutely stacked at the EDGE position with as many as six top-20 picks. According to most experts, it’s either Burns or Montez Sweat as the third-best EDGE rusher. Given his ability, we’re going to assume Burns goes off the board ahead of Sweat. If that is indeed within the top 10, it would lead to a run at this position from 11 on.

We all know the issues Elway has had finding a starter-caliber quarterback in the past. He seems to have found at least a reasonable stopgap option in Joe Flacco. This has not stopped Elway and Co. from meeting with some of the draft’s top signal callers. That includes a quarterback in Kyler Murray who doesn’t fit the general manager’s definition of a prototypical signal caller.

All the while, Denver has been linked to Missouri’s Drew Lock at No. 10 overall. If Murray and Haskins are both off the board before that selection, the Broncos could change the landscape of the draft. Should they select Lock, this puts Duke’s Daniel Jones in play to go within the top 15. If not, Lock himself might drop to a specific team late in the first round. This makes Elway a true wild card.