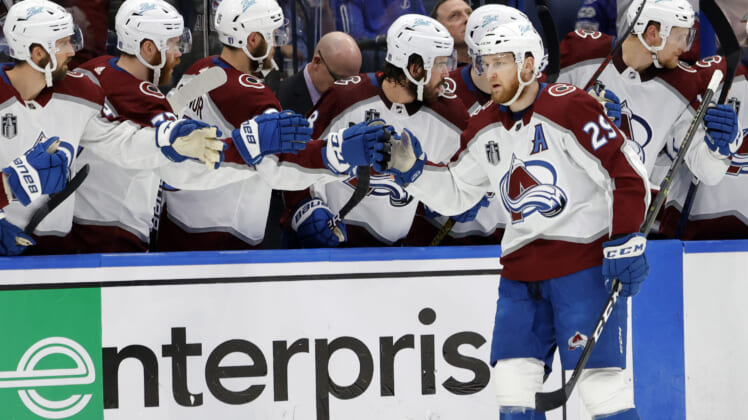 The Colorado Avalanche may have been the favorite to prevent the Tampa Bay Lightning from threepeating as Stanley Cup champions after taking home the trophy in each of the past two seasons, but that doesn’t make it any less special.

On Sunday night, the Avalanche wrapped up a hard-fought series, eliminating the Lightning 4-2 with a 2-1 victory. Nathan MacKinnon scored a goal and assisted on Artturi Lehkonen’s goal for another point for the deciding goal.

Defenseman Cale Makar took home the Conn Smythe trophy, awarded to the MVP of the Stanley Cup Playoffs. He racked up seven points, scoring three goals, and assisted on four others for the Avalanche throughout the six-game series.

In just his third season in the NHL, it’s clear, Makar has made a massive impact, having made two All-Star teams already at the age of 23. But his effort over the past couple of weeks will be one he never forgets. This kid has a bright future, but it might not get any better than the Conn Smythe as the new Stanley Cup winner.

The win caps off an incredible season for the Avalanche in which they went 56-19-7 during the regular season, for the best record in the Western Conference. The Avalanche earned this one thanks to a strong team effort and otherwise solid goaltending.

The Avalanche outscored the Lightning 20 goals to 15 in the series to take home the cup. Here are the final moments on the ice as the Avalanche closed out the win.

The last time the Avalance won the Stanley Cup came during the 2000-01 season. Before that, it was their 1995-96 team that took home the Cup. In all, it’s the franchise’s third NHL Championship in team history since they began play in 1979.

This is breaking news. Check back for more updates.