How To Watch the College Football National Championship: Georgia vs. TCU

Georgia and TCU will battle for the NCAA crown in this years College Football National Championship.

With the big matchup taking place in Southern California today, you’ll be hard-pressed to find someone more passionate about the game of football than an emotional college student. Now imagine your school has qualified for the biggest game in college football. Unlike the NFL’s Super Bowl, the College Football National Championship is relatively new, established in 2014.

The winners of the Rose Bowl and the Fiesta Bowl face off to see who takes home the hardware tonight. No. 1-ranked Georgia Bulldogs (14-0) are the reigning champions and have punched their championship game ticket for the second year in a row. They will face the No. 3-ranked TCU Horned Frogs (13-1) tonight, Monday, January 9th. 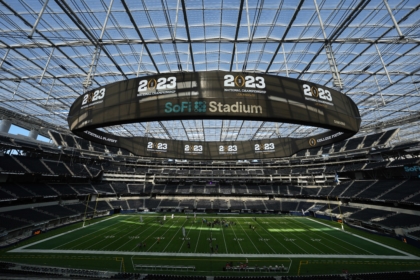 The 2023 College Football National Championship will be streamed on ESPN. You can catch the game on any of the streaming services listed below. Some even offer a free trial, which means you may get lucky and be able to watch the game for free.

Including 50 hours of DVR, Sling TV packages have more than enough to capture the entirety of the National Championship. Sling Orange also streams every single college bowl game, which you can watch at home or on the go. And if you refer a friend to Sling TV, you can earn $20 in promotional credit. Score!

No need to pick and choose with YouTube TV. YouTube makes it straightforward and offers one comprehensive Base plan for $64.99 per month that includes 100-plus channels, including ESPN. YouTube TV also offers a Spanish plan for $34.99 per month, which doesn’t include ESPN but does include 32 Spanish channels. You can explore with a seven-day free trial of either plan.

With YouTube TV, you can create up to six accounts per household, perfect for families whose members boast unique tastes in television. You can also enjoy unlimited DVR space and thousands of hours of DVR space. And for sports fans, enjoy channels like NFL Network, NBC, Fox Sports 1, and more — after you watch the National Championship on ESPN, of course.

Hulu has a few Live TV plans to choose from that will allow you to catch the National Championship. You can subscribe to Live TV only for $68.99 per month and get 75-plus live channels, including ESPN. But a better deal is Hulu + Live TV, which starts at $69.99 per month and includes all of the live TV channels, Hulu’s on-demand library, Disney Plus, and ESPN Plus.

Hulu + Live TV is a bargain lover’s dream. With the addition of ESPN Plus, you gain access to hundreds more sporting events at no extra cost. Hulu + Live TV also includes cool features like game time notifications and live TV playback, so you won’t miss a single second of the National Championship, even if you’re running a little late.

Each of DIRECTV STREAM’s packages includes ESPN as well as many regional sports channels that are hard to find anywhere else, including Bally Sports Midwest, AT&T Sportsnet, Altitude Sports, and more. DIRECTV STREAM also includes unlimited DVR that you can access on any screen in your home.

FuboTV has the most channels out of all of its competitors, so it’s no surprise it’s ranked number one in programming by J.D. Power. And not only does FuboTV stream live sports on channels like ESPN (hello, National Championship), but it also includes an on-demand library. Plus, record your favorite games and store them with your included 1,000 hours of DVR.

To watch the National Championship, subscribe to English Plus, English Premium, or English & Spanish Ultimate. DVR the game with either Premium or Ultimate with 20 hours of included DVR. Missed a crucial opening snap? Start the championship over with Timeshift. And after the game, check out Vidgo’s on-demand library, which includes thousands of titles for you to watch.

Watch the College Football National Championship on ESPN Plus

Last but definitely not least is ESPN’s very own streaming service, ESPN Plus. For just $9.99 per month or $99.99 per year, you can secure access to live sporting events (yes, you guessed it, the National Championship will be streaming here, too!) and ESPN Plus Originals. While it’s hard to compare ESPN Plus to other streaming services on this list, as it doesn’t include the typical live TV channels, it’s an all-in-one favorite for many sports fans.

Don’t forget, though, ESPN Plus is also available in the comprehensive Disney Bundle, which will give you access to everything Hulu, Disney Plus, and ESPN Plus have to offer. If you want to secure as many live TV channels as possible, bump that Disney Bundle up to Hulu + Live TV’s base package for the best of all worlds.

Will the Georgia Bulldogs claim victory two years in a row? Or will the TCU Horned Frogs manage to pull off another exciting victory? The only way to find out is by ensuring you have access to ESPN for tonights prime-time matchup. There are a plethora of streaming services that offer ESPN, but the best bang for your buck is Sling TV. Don’t miss out on the big game tonight at 7:30 pm EST.

Where can I stream the national championship game?

You can stream the College Football National Championship game on any streaming service that includes ESPN.

Where’s the national championship for college football in 2023?

The National Championship for college football in 2023 will be played at SoFi Stadium in Inglewood, California, home of the NFL’s Los Angeles Rams and Los Angeles Chargers.

Who’s playing in the 2023 national championship?

The Georgia Bulldogs and the TCU Horned Frogs will go head to head in the 2023 National Championship.