NFL trade deadline winners and losers from a record-breaking day 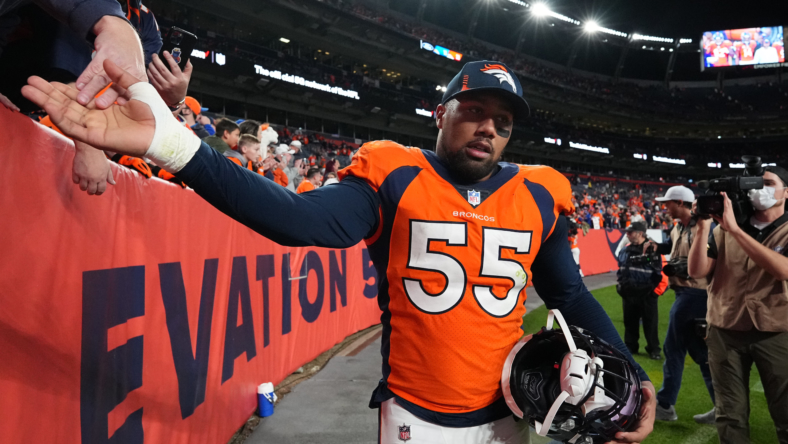 The Nov. 1, 2022, NFL trade deadline has officially passed. Trade rumors run rampant each season this time of year, but unlike in the recent past, we saw a flurry of action on the day of the deadline.

Some teams looking to add to their rosters struck early, with the San Francisco 49ers perhaps pulling off the biggest trade of the season, adding Christian McCaffrey, but he wasn’t the only big name moved ahead of the deadline. In all, we saw 20 players traded ahead of the deadline and a new NFL record 10 trades completed on the final day.

Recapping what ended up being a very fun NFL trade deadline, we look at the biggest winners and losers from the deals that were and weren’t completed.

With the Minnesota Vikings suddenly dealing with starting tight end Irv Smith Jr. out for the next 8-10 weeks with a high ankle sprain, they quickly traded for a top tight end. T.J. Hockenson going from the Detroit Lions to another NFC North team likely wasn’t on anyone’s radar, especially not mid-season, but evidently, it was a deal Detroit couldn’t pass up.

Still, for the Vikings to land a Pro Bowl tight end who likely hasn’t peaked yet at the age of 25 for what amounts to the 69th pick has to be considered a major win. Stealing him away from a division rival is simply the cherry on top. Especially when considering another NFC North team desperately in need of adding pass-catchers could have pulled off the same deal. Advantage – Vikings.

Imagine what is going through Aaron Rodgers‘ mind right now. He openly spoke about how he fully expects the Green Bay Packers to be involved in trade discussions for a top receiver, should they become available. Instead, he’s left alone, wondering if the Packers even care about him anymore after trading Davante Adams.

The word is that the Packers had identified Chase Claypool as a top target heading into the deadline, but much like the Hockenson deal, he headed to a division rival. Turns out Rodgers doesn’t own the Bears after all.

Perhaps the Packers manage to coax Odell Beckham Jr. into joining the crew once he’s healthy (expected to be in December). Otherwise, they could have a very frustrated QB on their hands. Yet, facing a 3.5-game deficit in the NFC North, with the division leaders getting better today, maybe this is the beginning of an end.

The biggest need for the New York Giants heading into the deadline was getting Daniel Jones a top receiving threat. But look at who got traded and what they cost. New GM Joe Schoen made the right decision, despite having a 6-2 record, by holding onto his draft picks and building this franchise the right way.

Now the G-Men can find a true playmaker instead of a 2B receiver. They tried that with Kenny Golladay, it hasn’t worked out. While not making an addition won’t help this current roster make a postseason push, the Giants are still a year away from being able to hang with the elites of the NFL. Feels like a loss, but trust me, this is a win.

The Pittsburgh Steelers, knowing they were far from being contenders, did their best to maximize value for a player they can easily replace. Rookie George Pickens has been everything the Steelers could have hoped for and more. His emergence makes Chase Claypool expendable, so that’s exactly what Pittsburgh did, exchanging a player who was well on his way to slipping down the depth chart for a second-round pick that currently projects to land at No. 43.

With Pickens now on track to be the team’s second-leading receiver behind Diontae Johnson, Pittsburgh likely wouldn’t have re-signed Claypool after his contract expires in 2023. Shedding him now is a way of maximizing their value, as his role would have continued to diminish. It also gives Claypool a better chance at catching on in a more featured role right away. It’s essentially a win-win situation.

It’s been said by Ari Meirov that the Cleveland Browns wanted a fourth-round pick for pending free agent Kareem Hunt. While the ask is on-par with what they’d likely receive as a compensatory pick when he signs elsewhere as a starter, it doesn’t do anything to help Hunt right now. Now he’s stuck in a backup role, hoping the Browns can build enough momentum for a playoff push when he previously requested a trade.

Another player who has to be disappointed with how the deadline turned out is Houston Texans receiver, Brandin Cooks. This is a 29-year-old player who’s reached 1,000 yards six times and played in a Super Bowl twice. Only now, he’s set to miss the playoffs for the fourth consecutive season. Cooks could have helped a lot of contenders, but either the Texans were asking too much, or his contract ($9.7M in 2022, $26M in 2023) scared too many teams away.

Either way, Cooks isn’t happy. Houston would have been much better off taking the best deal they could find for a player who doesn’t fit their competitive timeline.

Christian McCaffrey. Need we say more? The San Francisco 49ers added what might be the best running back fit in the Kyle Shanahan offense. It feels like a move that other NFL owners might want to veto, if they could.

This trade killed two birds with one stone because it also keeps the talented tailback away from other potential Super Bowl contenders such as the Buffalo Bills, Los Angeles Rams, and Philadelphia Eagles.

But that’s not all. GM John Lynch also managed to hit up an old friend by sending running back Jeff Wilson, whose role was pretty much stolen by CMC, to the now-Mike McDaniel-led Miami Dolphins for a fifth-round pick. Not a bad deadline for an already strong roster.

Maybe it’s not so bad in the long run for the Denver Broncos to part with their top pass rusher by trading Chubb. Getting a first-round pick to help make up for the lost compensation from the Russell Wilson trade is a win, even if it is currently projected to be the 20th pick.

Yet, with Chubb no longer on the roster, along with emerging sack artist Baron Browning also set to miss multiple weeks with a hip injury, the Broncos could suddenly see a drastic reduction in pressure created. Sure, Randy Gregory, Dre’Mont Jones, and Nik Bonitto remain, but this trade still feels like a big short-term loss for a team whose only strength was its defense.

Already emerging as one of the top threats in the AFC conference, the Miami Dolphins are capitalizing on their winning window while Tua Tagovailoa‘s on his rookie contract. Ranking in the bottom ten in sacks per game, the Dolphins identified adding a pass rusher as a top priority heading into the deadline.

They managed to get ahead of the 2023 free agency market by swinging a blockbuster trade for Bradley Chubb now. Set to be a free agent at the end of the season, the Dolphins parted with one of their two first-round selections to land the Pro Bowl pass rusher.

On pace for 11 sacks in 2022, Chubb can provide an immediate boost to a defense that also has Jaelan Phillips emerging as a sack specialist.