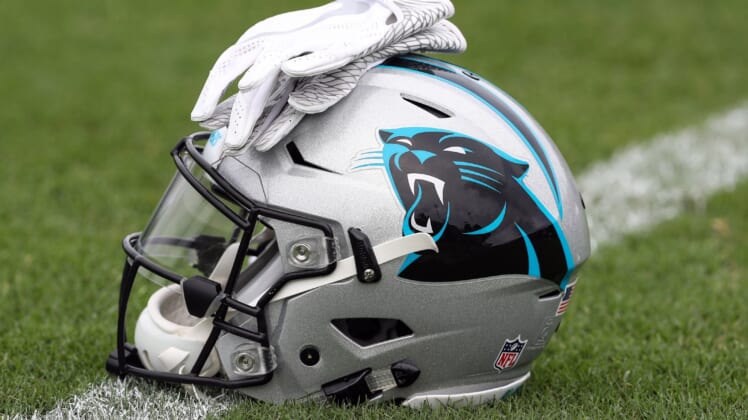 As the 2021 NFL Draft draws closer, the Carolina Panthers remain determined to trade for Deshaun Watson. But with the Houston Texans uninterested in even hearing trade offers, Carolina might have to turn its focus to another blockbuster deal to find its quarterback.

The Panthers tried making things work with Teddy Bridgewater last season. But, a year after signing him to a three-year, $63 million contract, team owner David Tepper wants an upgrade. Carolina pursued Matthew Stafford, coming up short, but never made a run at Carson Wentz. Instead, the franchise has sunk its hopes into the Texans granting Watson’s trade demand.

Unfortunately for the Panthers, that dream scenario seems unlikely. The 25-year-old quarterback has threatened to sit out this season and the Texans seem to prefer that over trading him. So, with one of the NFL’s best players off the table, Carolina could look for an upgrade over Bridgewater with a big move in the NFL Draft.

If the Panthers can’t acquire Watson, per CBS Sports’ Jason La Canfora, the expectation is they will be as aggressive as any team in their efforts to move into the top three picks to land a quarterback.

The organization is placing an emphasis on finding a franchise-caliber talent to replace Bridgewater in 2021. They offered the No. 8 overall pick to the Detroit Lions for Stafford and were rejected. It would cost even more, likely three first-round picks and Christian McCaffrey, to have a shot at Watson. So, a trade-up might be the best option.

An example of the potential cost can be found in our latest NFL mock draft. Carolina traded the No. 8 pick, the No. 39 selection and its 2022 second-round pick to the Miami Dolphins for the No. 3 overall pick. The Panthers and Dolphins might be ideal trade partners, with Miami looking to trade down in an effort to gain more draft capital.

Of course, it would be wise for Carolina to reach out to the New York Jets. While the expectation is they stand pat and trade Sam Darnold, general manager Joe Douglas is open to trading down. Jumping ahead of New York would allow the Panthers to choose from Ohio State star Justin Fields and BYU phenom Zach Wilson.

Either quarterback would present an immense talent upgrade over Bridgewater, who puts a low ceiling on offensive coordinator Joe Brady’s scheme. Wilson’s arm strength and athleticism have drawn some comparisons to Patrick Mahomes, while Fields has some similarities to Watson and Dak Prescott.

The Panthers could always sit back and wait. Trevor Lawrence, Wilson and Fields will all be gone by the time Carolina is on the clock at No. 8 overall. However, Heisman Trophy runner-up Mac Jones and North Dakota State quarterback Trey Lance should both be available for the Panthers. But Jones lacks the talent upside for a typical top-10 pick and Lance needs at least a year of coaching before a team should feel comfortable starting him.

For now, expect the Panthers to keep calling the Texans and hoping the right offer changes their mind. If that fails in the next few weeks, don’t be surprised to see Carolina jump up to No. 3 overall to find their new face of the franchise.