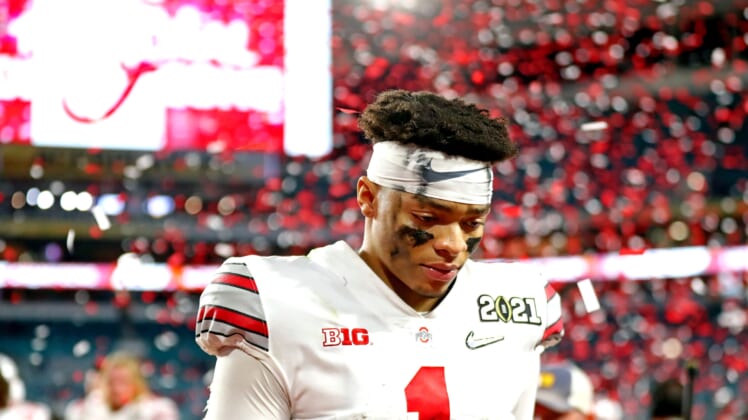 Everyone knows Trevor Lawrence will be the No. 1 overall pick, but NFL Draft rumors are buzzing about how the rest of the top-10 picks will play out in a matter of months.

Much like the trade market, featuring Deshaun Watson and Sam Darnold, everyone is focused on quarterbacks. The 2021 NFL Draft is deep at the most important position in football, offering multiple franchise-caliber talents for teams desperate for stability at the position.

Just last year, we saw three quarterbacks taken inside the top-six picks for only the third time in draft history. This time around, we could see an even bigger run with general managers doing whatever it takes to get their hands on one of these young passers.

NFL Draft rumors: Quarterbacks will likely fly off the board in 2021 NFL Draft

In an interview on ESPN’s 98.7 FM, NFL reporter Jeremy Fowler said he expects four quarterbacks will be taken with top-10 picks this year.

While draft day is still months away, with the action kicking off on April 29, we’re starting to get hints about how some of the top picks will play out.

The draft really starts with the New York Jets at the No. 2 spot. The organization is still open to building around Darnold, telling a growing list of suitors that they aren’t ready to trade him. But more recently, there is an increasing belief that New York will trade Darnold and select a high-upside quarterback with the second pick.

The Miami Dolphins will either stick with Tua Tagovailoa or trade for Watson. In either scenario, we’re likely to see a draft-day trade with another team moving up to the No. 3 selection. Miami can slide outside the top-five picks, picking up future draft capital and a top-12 pick this year, taking advantage of a desperate general manager.

While the Atlanta Falcons seem committed to Matt Ryan, that could change if Justin Fields is available at No. 4 overall. He is a phenomenal talent, despite some concerns about his processing ability, and the fans would love to have a Georgia native leading this team’s future.

Related: 5 teams who are a perfect fit for Alabama QB Mac Jones in 2021 NFL Draft

If Trevor Lawrence, Zach Wilson and Justin Fields all land in the top-five picks, there are still two more intriguing quarterback talents.

For organizations like the Chicago Bears and Washington Football Team, desperate for a pro-ready quarterback, trading up for Alabama star Mac Jones will be considered. Jones is even drawing consideration from teams already holding a top-10 pick.

Teams willing to take a bigger risk will love North Dakota State star Trey Lance. While he only played in one game last season, due to the COVID-19 pandemic, his athleticism and are strength are off the charts. He will likely need a year to learn the ropes, much like Patrick Mahomes did, but he can be a franchise-changing player with the right coaching and in a scheme that fits him.

The NFL quarterback carousel has already been busy this offseason and the NFL Draft will play an even bigger part in changes across the league. It’s great news for teams who need a quarterback and arguably even better for those picking later in the 2021 NFL Draft, with top talent falling right to them.