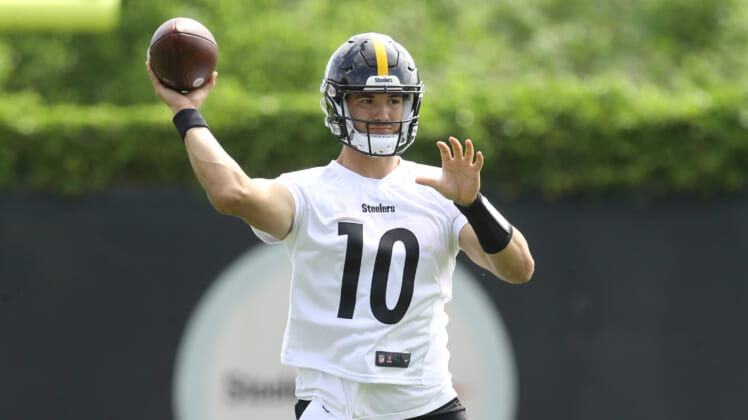 NFL training camp has arrived and as players take the field, they are ready for training camp battles that will define the 2022 season and potentially several NFL careers.

Quarterback battles are always the biggest headliners of NFL training camp and it’s no different this year. The Seattle Seahawks, Pittsburgh Steelers and Carolina Panthers will all be asking their signal-callers to prove why they deserve to start Week 1.

There will be plenty of other positional battles for football fans to watch. Defensively, several teams are throwing their best defensive backs and edge rushers on the field in the weeks ahead to determine who they can rely on consistently. While our focus here is on what will happen offensively, what happens this summer will also have a huge influence on the Sportsnaut NFL defense rankings.

Following the retirement of Ben Roethlisberger, the Pittsburgh Steelers aggressively addressed their quarterback situation. They struck quickly, signing quarterback Mitchell Trubisky to an incentive-laden contract. Shortly after signing him, he was informed Pittsburgh planned to draft a signal-caller. Sure enough, the Steelers used their first-round pick on Kenny Pickett.

There are plenty of reasons for the organization to feel very confident in Pickett. As a Pittsburgh alum with some pro-ready qualities, the Steelers were provided everything they needed to know. The rookie will get a shot to earn the job in training camp, but it seems unlikely he wins the job.

Trubisky anticipates being the starter and there’s no reason to question it. Reports suggest this NFL training camp battle is more for show than a legitimate competition. Combine that with recent projections that Pickett might not start until Week 18, this battle feels decided.

The Michael Gallup contract this offseason signaled the Dallas Cowboys’ long-term confidence in their No. 2 wide receiver. However, the young offensive weapon is still recovering from the torn ACL he suffered at the end of the regular season. Iffy to play in Week 1, there’s a clear path to snaps and targets for someone else on the depth chart.

James Washington certainly brings more experience (1,629 receiving yards in four seasons) and he showed big-play ability in 2018, racking up 725 receiving yards with a 16.7 ypc in 15 games. We haven’t seen that player since. He will see the field in 3WR sets, but there is an opportunity for someone to play an even bigger role.

The Athletic’s Jon Machota noted in early July that Jalen Tolbert stood out in minicamp, spending a lot of time with the first-team offense and quickly earning the trust of the coaches and his quarterback. A playmaker in college with a 4.49 40-yard dash at the NFL Combine, this 6-foot-1 wideout could have plenty of room to operate and might be moved around to different spots. Thanks to his upside and versatility, that gives him an edge.

Staring down an opportunity to acquire Baker Mayfield, the Seattle Seahawks passed on a cheap quarterback upgrade. Winning isn’t the priority in 2022 and for a team that will. be far more run-oriented following the departure of Russell Wilson, the Seahawks’ coaching staff is just fine with Geno Smith and Drew Lock as their starting options.

Who will be the Seahawks starting quarterback in Week 1? The smart bet is on Smith. He’s familiar with the system and his experience puts him in the best position to handle the pressure that comes from playing behind this offensive line. He also performed well as a starter in 2021, completing 70.5% of his passes with a 108.4 QB rating and 571 passing yards. It’s no surprise he is the favorite. 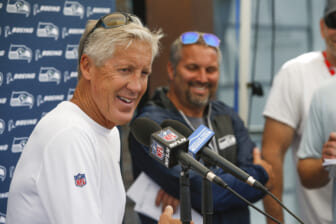 That’s not to suggest we won’t see plenty of Lock this fall. Seattle loved him during the 2019 NFL Draft process and the front office still believes there is some long-term upside as a starter. He’s only 25 and his first NFL season (89.7 QB rating, 7-3 TD-INT) suggests he merits a cursory look.

The Buffalo Bills will enter NFL training camp as the Super Bowl favorites. That’s what happens when you have an elite defense, an MVP candidate in quarterback Josh Allen, star wide receiver Stefon Diggs and a cast of outstanding talent. One of the few questions regarding this roster is the running back positon, with an answer likely coming this summer.

Devin Singletary led the team in rushing yards (870) and yards per rush (4.6) this past season. The problem is that his efficiency is sporadic and the production varies. In the final nine games, including the playoffs, Singletary averaged over 4.5 ypr four times and under 4.0 ypr in every contest.

He enters atop Buffalo’s depth chart right now, but there is competition. James Cook, drafted 63rd overall in the 2022 NFL Draft, is already penciled in to be the third-down back. If he shows even more in his first NFL training camp, he could take on a larger workload. We also still have to keep an eye on Zack Moss, who Buffalo liked enough to spend a top-90 pick on in 2022.

The Carolina Panthers saw enough of Sam Darnold to finally pull the trigger on the Mayfield trade. The team is calling this a legitimate quarterback competition right now and Darnold’s familiarity with the team should provide him with an edge.

However, nothing we’ve seen from these two first-round picks in the 2018 NFL Draft suggests this competition should last long. Just comparing overall production paints a clear picture on the difference between these two players.

Darnold’s opportunities to be an NFL starter are likely over after this, he’ll be remembered as one of the biggest NFL Draft busts in his era. As for Mayfield, this is a landing spot with enough surrounding talent to perform like an average starting quarterback. If he stays healthy and plays at that level, he’ll earn himself a solid contract next year in free agency as a starter for a team needing a bridge quarterback.