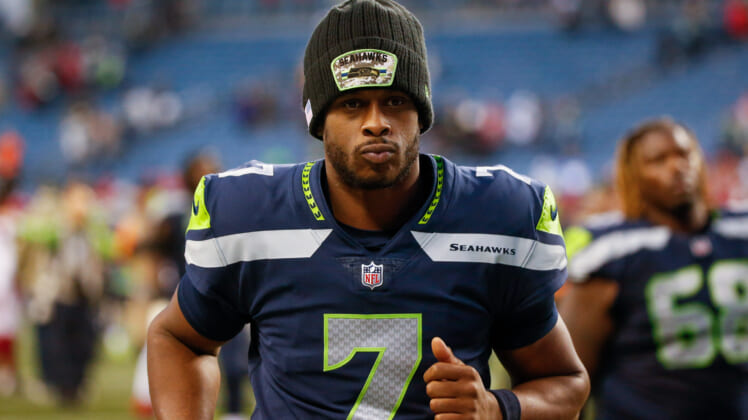 While there is plenty of confidence in Drew Lock from head coach Pete Carroll, Geno Smith is emerging as the front runner to be the Seattle Seahawks starting quarterback for their Week 1 matchup against the Denver Broncos.

Seattle’s season opener is important for multiple reasons. First, it begins the 2022 NFL campaign against the former face of the franchise, Russell Wilson, in a primetime matchup on Monday Night Football. The Broncos vs Seahawks game will also give us an early look at the team’s quarterback plans this fall.

Lock was part of the trade package from Denver for Wilson. A former second-round pick, there is a belief within the organization that he still has starting-caliber tools and a change of scenery could unlock something.

With Seattle in a rebuilding year, there’s some logic behind making Lock the starting quarterback in 2022. However, it’s a job he must earn and he’ll have to take the job from Smith.

Seahawks’ offensive coordinator Shane Waldron shared in a recent radio interview with 93.3 KJR, via The News Tribune that Smith will head into the summer as the leader in the Seahawks’ quarterback competition.

It’s going to be a legitimate battle with both experienced signal-callers receiving starts in the preseason and sharing first-team practice reps throughout training camp. As things stand now, though, Smith would take the field as the starting quarterback if the NFL season started today.

Lock will certainly see the field during the 2022 regular season, but the Seahawks are taking the right approach to this quarterback competition. Waldron comes into his second season as the team’s offensive coordinator and Smith is familiar with the system in place.

A deep understanding of Waldron’s system and great recall of the Seahawks’ playbook are huge factors working in Smith’s favor. He played well as a fill-in starter when Wilson landed on injured reserve, operating within the structure of the passing attack and executing what Waldron’s game plan.

During an appearance on The Exempt List with Charles McDonald, Seahawks reporter Michael-Shawn Dugar of The Athletic explained why he believes Smith will open the season as the starter.

Chemistry and timing with the wide receivers is a big part of it. According to Corbin K. Smith of Sports Illustrated, Smith completed 17-of-21 pass attempts and threw four touchdowns when targeting D.K. Metcalf.

There’s another advantage working in Smith’s favor. He operates within the structure of play designs, something Wilson rarely did throughout his career. Waldron can feel confident knowing Smith will take what is there and execute the play call that’s made.

While we expect Lock to get a shot during the upcoming NFL season, starting Smith to open the year is the smartest decision for the franchise. He won’t influence games enough to hurt their 2023 draft picks, but he will give the coaching staff a better chance to evaluate a young offensive line.