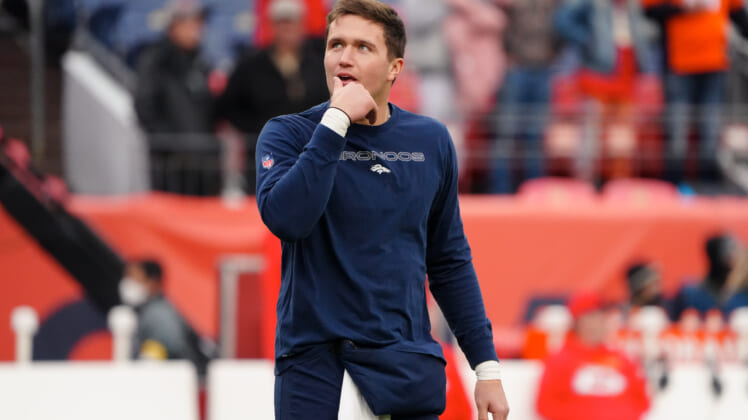 With Drew Lock as the current starting quarterback for the Seattle Seahawks, many thought the franchise might be intrigued by one of the top quarterbacks in the incoming draft class.

After trading Russell Wilson, the ‘Hawks headed into the 2022 NFL Draft with the ninth overall pick, yet opted to select left tackle Charles Cross instead.

This allowed the Pittsburgh Steelers to happily select Pitt QB Kenny Pickett with the 20th overall pick, 12 selections later. There wasn’t another signal-caller drafted in the first round.

Instead another potential first-round pick, Malik Willis, fell all the way down to the third round, where the Tennessee Titans plucked the Liberty product with the 86th overall pick.

The Seahawks proceeded to make three more draft selections before the next quarterback went off the board with Desmond Ridder going to the Atlanta Falcons at pick No. 74.

Clearly the Seahawks had plenty of opportunities to select Willis or another quarterback prospect, but they opted not to. Why?

Seahawks already feel they had the best QB available

In a recent appearance on KJR 93.3 FM, head coach Pete Carroll had an eye-opening statement that many may not quite agree with.

Chances are Carroll really believes this to be true, but that doesn’t mean it is. While the Seahawks have maintained the idea that they wanted Lock all along, with them specifically seeking him as part of the trade package, it’s unlikely the 25-year-old QB will suddenly put it all together in his fourth NFL season.

Yet, that’s exactly what coach Carroll and the rest of the squad are banking on by choosing not to pick any other quarterbacks in the draft. While Geno Smith has returned on another one-year deal, the keys to the offense appear to belong to Lock. Whether that’s a good decision or not remains to be seen, but it will be tough to forget all the other chances general manager John Schneider had to otherwise address the position elsewhere.