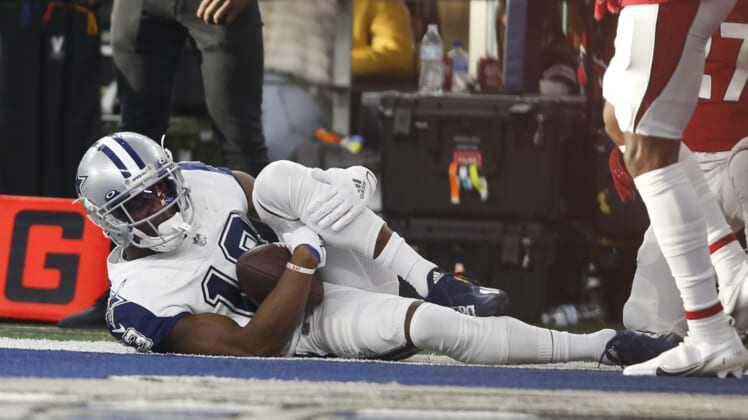 The Dallas Cowboys offense suffered a devastating blow late in the 2021 season when Michael Gallup tore an ACL while scoring a touchdown against the Arizona Cardinals. While it will cost him time this upcoming season, he might return sooner than expected.

Many were rightfully concerned about Gallup’s future in Dallas immediately after he suffered the devastating knee injury. On the verge of becoming an unrestricted free agent, with Dallas already wrestling with cap issues, retaining Gallup seemed difficult.

The front office made a risky move, trading Amari Cooper for a Day 3 pick to offload his contract and then immediately signing Gallup. While agreeing to a $57.5 million deal with a 26-year-old recovering from ACL surgery was risky, it seems an early return is within reason.

According to Todd Archer of ESPN, Galupp is uncertain to be ready for a return to the field in Week 1. However, there seems to be some confidence within the organization that the playmaking wideout can return at some point in September.

It tracks with some previous reporting this offseason. While Dallas would like Gallup to be cleared by the medical staff to face the Tampa Bay Buccaneers in the Sunday Night Football kickoff game in Week 1, it’s very unlikely to happen.

Realistically, there could even be a targeted date by the team. The Cowboys face the Cincinnati Bengals on Sept. 18, exactly a week after battling Tampa Bay. If the medical staff wants to provide the young receiver with more time, Week 3 could be an ideal return date.

Because Dallas plays on Monday night in Week 3, it would provide Gallup with one additional day. While it might not seem like much, it could allow the Cowboys to put him through a vigorous workout on Friday and then see how he feels Saturday and Sunday. If everything checks out, he then returns on Monday Night Football.

Once he’s healthy, Gallup will play a prominent role as the No. 2 option for quarterback Dak Prescott in an offense that might need to throw more in 2022 with the defense expected to regress.