Alabama Crimson Tide quarterback Bryce Young is the crown jewel of the 2023 NFL Draft, viewed as an elite talent ready to be the face of a franchise. While the Heisman Trophy winner still needs to play in the upcoming 2022 college football season, NFL teams certainly have him on their radar.

Even at 6-foot, Young’s height shouldn’t be a huge concern for scouts and general managers. Drawing NFL comparisons to a young Drew Brees from top evaluators, Young’s combination of accuracy and decision-making truly makes him stand out.

It all came together in his first season as Alabama’s starting quarterback, winning the Heisman Trophy and times even looking better than his predecessor Mac Jones. Young is the reason the Crimson Tide are near the top of the college football rankings this season and why they are favorites in College Football Playoff projections.

Keeping that in mind, let’s examine which five NFL teams are in the best position to land Bryce Young.

The Houston Texans have every reason to be confident in quarterback Davis Mills right now. He impressed as a rookie and already won over the trust and respect of the locker room this summer. At the very least, the 2021 third-round pick looks like a viable NFL quarterback.

Bryce Young is still a superior talent and exactly the kind of player Houston needs to replace Deshaun Watson. The Texans still have one of the worst rosters in the league and with Mills not the caliber of player capable of putting an offense on his back, this team will finish near the bottom of the NFL standings when the season ends.

That’s already a huge benefit for Houston in the competition for Young. Even if they don’t land the No. 1 overall pick on their own, Houston can package its 2023 first-round pick along with the Cleveland Browns’ first-round pick and additional Day 2 compensation or future picks to land Young.

There’s a reason the Seattle Seahawks never fully pursued Baker Mayfield and it’s the same reason 70-year-old coach Pete Carroll is comfortable playing out the season with Drew Lock and Geno Smith. Seattle wants to be in the perfect position to land its franchise quarterback, especially if it’s someone with some similar characteristics as Russell Wilson.

Keep in mind that the core is already being put into place for the next star in this offense. Seattle spent its first-round pick on left tackle Charles Cross and Abraham Lucas (72nd overall pick) profiles as an above-average starting right tackle in his prime. Beyond two potential pillars along the offensive line, Seattle boasts a skill group with DK Metcalf, Tyler Lockett and Kenneth Walker III under team control for years to come.

All of this sets this team up perfectly to make a run at whichever quarterback they want. If the Seahawks finish with a top-five pick, it can be packaged with the 2023 Denver Broncos’ first-round selection to move up and snag the quarterback John Schneider wants. If it’s Young, he walks into an ideal situation. 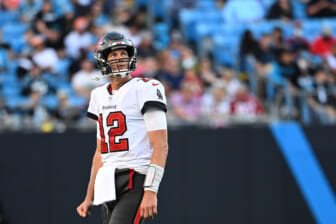 Also Read:
5 NFL milestones that could be reached in 2022

The Detroit Lions are arguably building an even better supporting cast than the Seahawks. If you want Bryce Young to thrive, put him behind an outstanding offensive line. Detroit already boasts that and its most important starters are all under contract beyond the 2023 season.

One thing working against the Lions is their chances to win far more games than the Seahawks and Texans. Jared Goff provides consistency, even if it doesn’t come with a high ceiling, which helps for an offense that might be flying under the radar. Realistically, trading up might be Detroit’s only hope at landing one of the elite quarterback prospects in the 2023 NFL Draft.

With that said, this is a regime worth betting on to be aggressive. Detroit still holds a pair of 2023 first-round picks and it could even package its 2023 first-round selection. The Lions know how important a marketable face of the franchise is and Young would provide that, possibly even opening the door for Detroit to rule the NFC North by 2024. 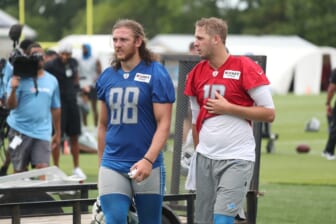 The Philadelphia Eagles could win the NFC East this season and seem like a viable bet to make the NFL playoffs. Howie Roseman put all the necessary pieces around Jalen Hurts, setting his young quarterback up with the opportunity for a breakout season.

It’s still important to remember this is just a one-year audition. Philadelphia isn’t committed to Hurts’ long-term and there are still some concerns about whether or not Hurts has the physical tools to be a top-10 quarterback. If he disappoints this year, Roseman won’t hesitate to explore alternatives.

Philadelphia could build a trade package around two 2023 first-round picks (Eagles, New Orleans Saints) and Hurts to move up in the draft order. It could be an appealing offer to teams like the Carolina Panthers or even one of the clubs on this list. One thing is for certain, Roseman will be aggressive if he believes it improves the Eagles’ chances of winning a Super Bowl.

The Atlanta Falcons passed on the opportunity to draft Justin Fields and they didn’t reach for a quarterback in this past NFL Draft. If there is an opportunity in 2023 to find the next leader of this team, Terry Fontenot won’t waste another year.

Atlanta would be at a slight disadvantage compared to the other potential competitors for Bryce Young because it only has its individual picks in each of the first three rounds next year. Fontenot could include future picks in a trade-up scenario, but it would take an overwhelming offer to come out on top.

Realistically, the Falcons’ best hope at landing Young is a dreadful 2022 season with painful losses every week and quarterbacks Marcus Mariota and Desmond Ridder struggling as starters. If that happens, Bryce Young would be elated about working with Drake London and Kyle Pitts.