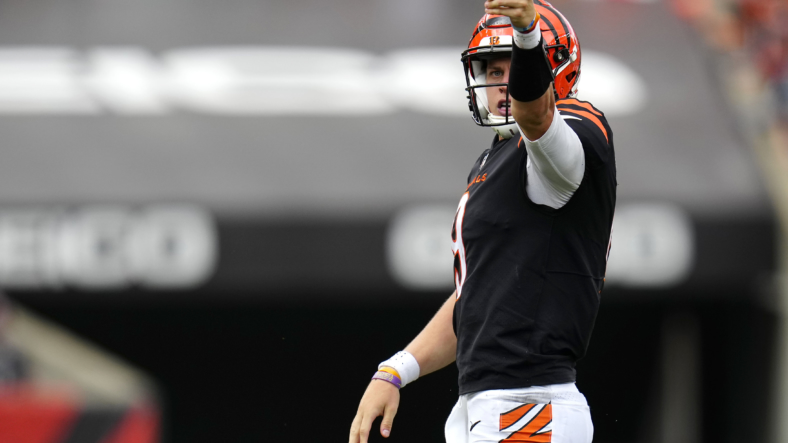 NFL quarterback performances varied throughout Week 1 of the 2022 season. Kansas City Chiefs signal caller Patrick Mahomes put up a stellar outing against the Arizona Cardinals. Justin Herbert did his thing in the Los Angeles Chargers’ win over the Las Vegas Raiders.

On the other end of the spectrum, several signal callers struggled big time. That included a young 49ers quarterback in the Windy City and a certain future Hall of Famer laying an egg against a division rival.

Below, we look at the five worst NFL quarterback performances from the opening Sunday of regular-season action.

Lance’s offensive line and the rainy conditions didn’t do the second-year quarterback any favors inside Soldier Field to open the 2022 season. It’s hard to gauge where he’s at in his development given what we saw on Sunday. With that said, it does seem that Lance is out of his element as a starting quarterback for the time being.

Once San Francisco lost running back Elijah Mitchell to a knee injury in the first half, Chicago’s defense was able to pin its ears back and focus on Lance. The end result was one of the worst NFL quarterback performances from Week 1. Without even blitzing Lance, the Bears were able to get to him for consistent pressure. A second-half interception into the hands of safety Eddie Jackson pretty much put this game on ice with Chicago scoring the final 19 points after falling down 10-0. Regardless of the other factors, Lance must perform better moving forward.

We hate to put a quarterback who suffered a late-game injury and will now miss extensive action on this list. But Prescott’s performance before he suffered the aforementioned hand injury Sunday night against the Tampa Bay Buccaneers left a whole lot to be desired. The signal caller led Dallas to a field goal on the opening drive before seeing the team shutout for the remainder of the game while accumulating less than 200 total yards during that span.

To put this performance into perspective, it’s the third-fewest yards Prescott has thrown for in his career. He averaged 4.6 yards per attempt and threw a brutal interception into the hands of Buccaneers safety Antoine Winfield Jr.

There was some talk about Prescott’s right ankle leading up to this game. Whether that played a role in the struggles remains to be seen. What we do know is that he will be sidelined for some time with surgery on his thumb planned for the coming days.

The recently-extended Carr threw a career high 14 interceptions a season ago. It was surprising given that he had tallied 17 combined picks in the previous two years. Whether we’re looking at a mistake-prone quarterback now remains to be seen. But for just the third time in his career, he threw three interceptions in a game. Carr also fumbled the ball twice in a 24-19 loss to the Los Angeles Chargers.

If Carr had played a bit better, Vegas would’ve been able to pull off an upset road win over the division-rival Chargers. It has to be seen as concerning for first-year head coach Josh McDaniels and Co.

Carr completed 10 passes to new wide receiver Davante Adams in the loss. He was 12-of-25 targeting other players. We understand that he has a built-in relationship with his former Fresno State teammate. But Carr can’t continue to force the ball in that direction. If he does, the veteran will be a continual presence in our weekly list of the worst NFL quarterback performances.

Super Bowl hangover, anyone? What we saw from Burrow and the Cincinnati Bengals in their Week 1 loss to the division-rival Pittsburgh Steelers can’t instill too much confidence moving forward. Despite putting up 432 total yards and 32 first downs, mistake after mistake cost the team in its overtime defeat.

Cincinnati turned the ball over five times, leading to 17 Steelers points in what ended up being a three-point defeat. Burrow accounted for all five turnovers himself.

We must note that Cincinnati’s revamped offensive line yielded a whopping seven sacks after Burrow was taken down a league-high 51 times a season ago. That’s going to be an issue moving forward. And it could impact the quarterback’s ability to limit his mistakes. Even then, these five turnovers just don’t paint him in the best of lights.

“They made good plays. Obviously I’d like to have some of those back, and they made some good plays on some of them,” Burrow said after the game. This must change Week 2 against an equally desperate Dallas Cowboys squad.

Aaron Rodgers on a list of worst NFL quarterback performances? Blasphemy. Here’s a dude who has tallied 260 touchdowns against 41 interceptions since the start of the 2014 season. Sunday’s loss to the Minnesota Vikings represented just the fourth time since the 2018 season that Rodgers failed to throw a touchdown. He also threw an interception and lost a fumble in an ugly 23-7 road defeat.

There’s certainly some backstories here that don’t involve Rodgers directly. His offensive line was a disaster in front of the quarterback. Rookie receiver Christian Watson looked to be in over his head with one ugly drop. Green Bay’s front office has done very little to provide Rodgers with the necessary targets. Even then, a reigning two-time NFL MVP should have been able to perform better to open the 2022 season.