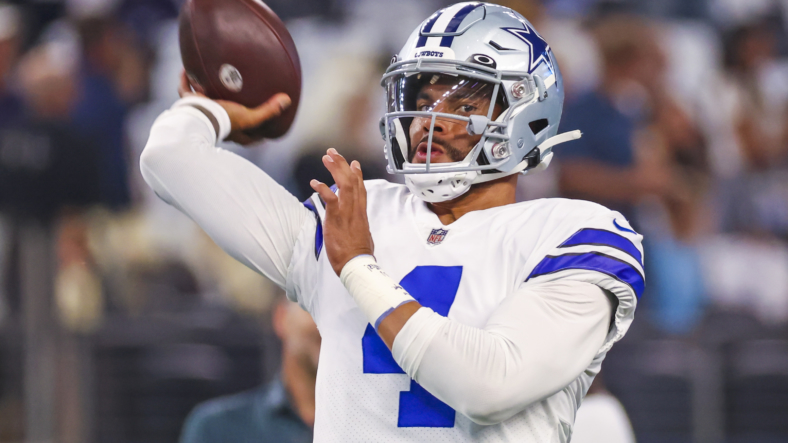 The Tampa Bay Buccaneers took care of business Sunday night against the Dallas Cowboys, winning by the score of 19-3. Four first-half field goals from Ryan Succop helped Tom Brady and Co. overcome some struggles in the red zone.

Speaking of struggles, Dak Prescott and the Cowboys’ offense couldn’t get out of their own way. That included an ugly first-half interception and some major struggles in pass protection before Prescott evenutally left due to injury. The only reason Dallas remained somewhat close in this one was the performance of star linebacker Micah Parsons. Below, we provide you with the five biggest winners and losers from Tampa Bay’s 16-point victory over the Dallas Cowboys.

When all was said and done, Cowboys wide receivers had caught 11-of-28 targets for 125 yards. Prescott boasted an disastrous 38.5 quarterback rating when targeting his wide receivers. A question mark heading into the season, Tampa Bay’s secondary came to play Sunday night in Big D.

Loser: CeeDee Lamb comes up small for the Dallas Cowboys

On the other end of the spectrum, it was common knowledge that Dallas needed Lamb to step up with the injury issues behind him at wide receiver in Big D. There wasn’t much reason to believe that the former Oklahoma standout couldn’t do that. Lamb, 23, caught a combined 153 passes for 2,037 yards and 11 touchdowns in his first two seasons with Dallas.

Unfortunately, he just wasn’t up to the task for Dallas Sunday night. Lamb caught 2-of-11 targets for 29 yards in what was a disastrous all-around performance. He struggled getting separation at the line while failing to provide Prescott with the necessary window to throw through. Dallas isn’t going to go anywhere if Lamb continues to perform at this level moving forward.

If it weren’t for two Parsons sacks in the first half, this game would have gotten out of hand in a big way. Both sacks of Tom Brady came with the Buccaneers driving for a potential touchdown. Both came on third down, leading to Tampa Bay scoring a total of three points on those two possessions.

This has been a continuing theme for Parsons throughout his career. Now that the Dallas Cowboys are using him as more of a pass rusher than we saw during his rookie season, Parsons could potentially dominate even more moving forward. North of 20 sacks and the NFL Defensive Player of the Year award are not out of the question for this sophomore stud.

Loser: Dak Prescott can’t get out of his own way

There was a lot made of Prescott’s ankle heading into this game. It was just last week that the Pro Bowl quarterback was surprisingly included in the Dallas Cowboys’ injury report. While Prescott said it was no big deal, a report leading up to Sunday’s game concluded that there might be an issue here. If what we saw from the veteran Sunday night in Big D is any indication, he might not be at 100%.

Dallas opened the game with a field goal before seeng its offense struggle to get anything going against the Buccaneers defense. After that initial series, the Cowboys gained 190 total yards while scoring zero points. Adding insult to injury, Prescott also exited late in the fourth quarter with a hand injury and didn’t return. Ouch!

If the Buccaneers can get balance out of the backfield, they are going to be nearly impossible to beat moving forward. Tampa Bay was 5-0 when Fournette went for 100-plus total yards a season ago. Give Tom Brady this type of balance, and he’s going to eat in the passing game.

That’s exactly what we saw in Tampa Bay’s 16-point win Sunday night. Fournette tallied 127 rushing yards on 21 attempts. He was much quicker through the hole than we have seen in the past. Fournette also displayed elite-level vision behind Tampa Bay’s makeshift offensive line. It was a great start to the season for the veteran back.