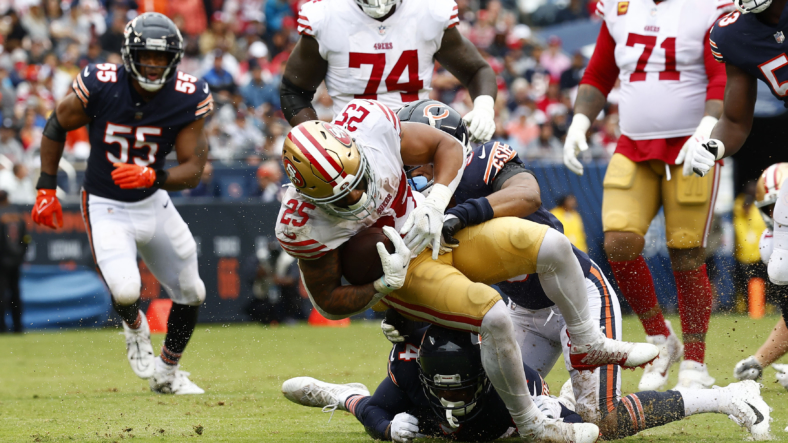 Update: Elijah Mitchell will be placed on injured reserve and is expected to miss two months with a sprained MCL in the right knee, 49ers head coach Kyle Shanahan announced on Monday.

Second-year running back Elijah Mitchell is expected to play a big role for the San Francisco 49ers in 2022. A sixth-round pick out of Louisiana last year, Mitchell opened the season as San Francisco’s starting running back in a backfield that includes young quarterback Trey Lance.

Unfortunately, Mitchell might now be out for some time. The star back suffered a knee injury in the second quarter of Sunday’s season opener against the Chicago Bears and was almost immediately ruled out for the remainder of the game.

It’s not exactly known how Mitchell injured his knee. But the fact that he was ruled out so quick can’t be seen as a good development. Prior to going down with the injury, Mitchell had put up 41 yards on six attempts. There’s also some concern that the conditions inside a rain-soaked Soldier Field could have played a role here.

Elijah Mitchell injury and importance to the San Francisco 49ers

To say that this could be a big loss for San Francisco would be an understatement. Despite some injury issues, Mitchell was electric as a rookie for the 49ers in 2021.

From a fantasy perspective, Wilson would become a solid waiver-wire addition should Mitchell be sidelined for the long haul. The former undrafted rookie from North Texas scored 15 combined touchhdowns on 169 touches from 2019-20 before dealing with injuries himself last season.

Wide receiver Deebo Samuel also becomes an elite option in both standards leagues and DFS. He finished the first half of Sunday’s game against Chicago second on the 49ers with 40 rushing yards and a touchdown.