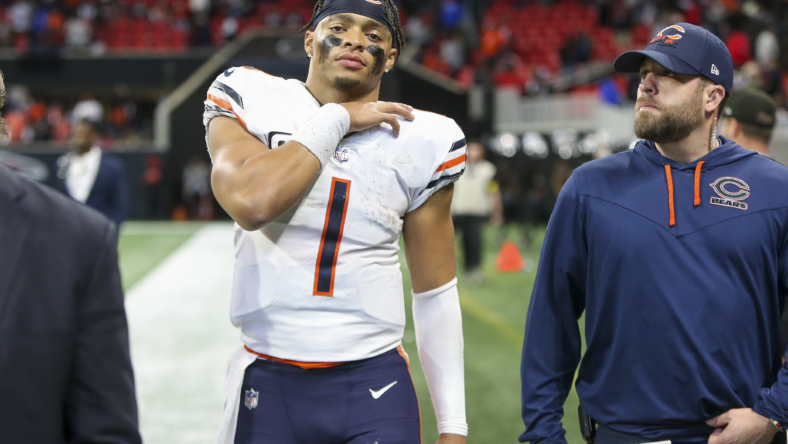 Our initial NFL injury report from Week 12 is out. There’s multiple big-name quarterbacks heading the list, including two NFC West signal callers in that of Matthew Stafford and Kyler Murray.

Below is our initial NFL injury report for Week 12. We will have daily updates throughout the next several days.

Fields suffered a shoulder injury in last week’s loss to the Atlanta Falcons, but was able to remain in the game. Following said matchup, it was noted that Fields suffered a dislocated non-throwing shoulder. That report has since been refuted.

What we do know is that the Bears consider Fields day-to-day. There’s also a chance that this could be a long-term injury. We’ll obviously have further updates on our NFL injury report later in the week. For now, you might want to look at the waiver wire to replace a quarterback in Fields who has been dominant recently.

If Fields is unable to go Week 12 against the New York Jets, backup Trevor Siemian would get the start. No one wants to see that.

After missing Los Angeles’ Week 10 outing with the Arizona Cardinals due to a concussion, Stafford suffered another head injury this past Sunday against the New Orleans Saints and didn’t return to action.

Stafford is now in the NFL concussion protocol and is very much iffy to go in Week 12 against the Kansas City Chiefs. At 3-7 on the season, these Rams are playing out the string. That could include Bryce Perkins getting the start against Patrick Mahomes and Co.

Murray has now been a part of the NFL injury report in each of the past two weeks, missing both outings due to a hamstring injury.

In Murray’s stead last week against the San Francisco 49ers, Colt McCoy struggled as Arizona was blown out by the score of 38-10 in Mexico City. The good news? Things seem to be trending in the direction of Murray suiting up against the Chargers next week. The bad news? At 4-7, it matters very little to Arizona.

Mixon suffered a concussion in last week’s win over the Pittsburgh Steelers and did not return to the game. Fresh off a five-touchdown performance in his previous outing, Mixon didn’t do a whole lot before he exited.

Even then, there has to be some concern about his status against a red-hot Tennessee Titans team in Week 12. Mixon will obviously have to pass through the NFL concussion protocol in order to play. We’ll have further updates on that as practices continue this week. If Mixon can’t go, Samaje Perine would get a bulk of the reps against an elite Titans run defense.

CEH has played in a total of nine snaps over the past two weeks as rookie Isiah Pacheco passed him on Kansas City’s depth chart. He also suffered a high-ankle sprain in Sunday night”s win over the Los Angeles Chargers. This will likely cost the former first-round pick multiple weeks of action.

From a fantasy perspective, Pacheco remains an obvious play. The seventh-round pick has put up 189 rushing yards at a clip of 6.1 yards per rush over the past two games.

Fournette suffered a hip injury in Tampa Bay’s win over the Seahawks in Germany back in Week 10 and did not return to action. In his stead, rookie Rachaad White provided Tom Brady and Co. the balance they have desperately been seeking this season. The third-round pick put up 105 yards on 22 attempts.

The expectation is that Fournette will be able to go when Tampa Bay takes on the Cleveland Browns in Week 12. With that said, we’re not too sure he’s going to retake lead ball-carrier duties for the Bucs. Fournette is averaging a mere 3.4 yards per rush on the season.

The All-Pro wide receiver is dealing with both a torn labrum and a hairline fracture in his hip. Chase could play through the labrum tear, but Cincinnati can’t clear him to play until the hairline fracture heals.

The good news in this initial NFL injury report? Chase has returned to practice for the Bengals ahead of their big Week 12 outing against the Tennessee Titans. It’s not yet known whether he will suit up. But given this most-recent news, things seem to be trending in that direction.

Brown was designated for return from IR ahead of Arizona’s Week 11 outing against the San Francisco 49ers. Though, he was not quite ready to return after suffering a foot injury back in Week 6.

It remains to be seen if Brown will be able to return as his 4-7 Cardinals prepared for the Los Angeles Chargers in Week 12. Though, it might make sense for Arizona to hold him out given that the team has a Week 13 bye. In six games this season, Brown has registered 43 receptions for 485 yards and three touchdowns.

Smith-Schuster exited Week 10’s game against the Jacksonville Jaguars with a head injury. Almost immediately, it was noted that he’s dealing with a concussion. Obviously, Smith-Schuster will have to pass through the necessary protocols to play this week against the lowly Rams after missing Sunday’s game.

A free-agent signing from the Steelers this past spring, Smith-Schuster has hauled in 46-of-64 targets for 615 yards from Patrick Mahomes on the season. He’s obviously been a key cog in replacing the production Kansas City previously saw from the recently-traded Tyreek Hill.

Jeudy suffered an ankle injury in Denver’s loss to the Tennessee Titans back in Week 10. He was carted off the field and could not put any pressure on his foot following the injury.

After missing last week’s game against the Las Vegas Raiders, Jeudy is considered day-to-day. Though, he did sit out practice on Tuesday. At this point, it’s not yet known whether Jeudy will go Week 12 as Denver looks to rebounds after a stretch that has seen it lose six of seven. Either way, no one on the Broncos’ league-worst offense is worth rostering outside of Courtland Sutton.

Doubs suffered a high-ankle sprain during Green Bay’s Week 9 loss to the Detroit Lions and has missed each of the past two outings.

A fourth-round pick out of Nevada back in April, Doubs has recorded 31 receptions for 314 yards and three touchdowns in nine games this season. Unfortunately, he seems unlikely to play Week 12 agianst the NFC-best Philadelphia Eagles.

Pitts suffered a season-ending torn MCL in his knee during Atlanta’s Week 10 win over the Detroit Lions. It puts an end to what was a down sophomore season for the generational talent and first-year Pro Bowler.

The Florida product ended up catching just 28 passes for 356 yards in 10 games after putting up north of 1,000 yards as a rookie. That was primarily due to Marcus Mariota’s struggles passing the ball. With Pitts sidelined, expect rookie wide receiver Drake London to see a larger target share moving forward. 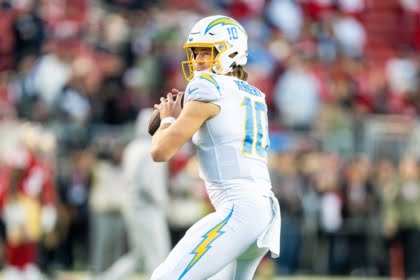