Why the Indianapolis Colts must fire general manager Chris Ballard 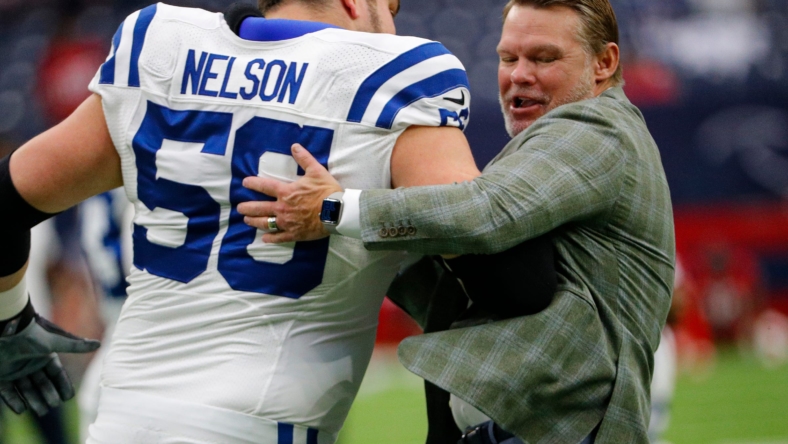 One day after the Indianapolis Colts’ fewest total yards (121) since gaining just 118 in 1997, the team parted ways with head coach Frank Reich. This is also one week after they parted ways with their offensive coordinator, Marcus Brady, because the team was getting off to slow starts in games.

Now, the team tabbed current Colts Ring of Honor Jeff Saturday to be the team’s interim head coach. Keep in mind this is an external hiring of a guy who has never coached at the collegiate or NFL level.

Meanwhile, there are several other former head coaches that could have been selected. Or the Colts could have even promoted someone from their current coaching staff. For example, Gus Bradley has head coaching experience, and a lot of fans and analysts want to see special teams coach Bubba Ventrone. Regardless, the hiring of Saturday is a move that was done by Jim Irsay and not general manager Chris Ballard.

The beginning of the end for Chris Ballard

Castonzo previously told the team he was considering retiring in 2019. He instead played in 2020 and then retired at the conclusion of the season. Considering that Ballard knew his franchise left tackle was going to be retiring, it made sense for him to have a plan in place.

Whether that’s drafting a franchise left tackle in the 2020 draft, whether that’s a plug-and-play guy or one that needs some time to be molded, or making a trade for someone who could step into the starting left tackle spot in the next season or two. Instead, the team traded their first-round pick for DeForest Buckner and then drafted Michael Pittman Jr. and Jonathan Taylor.

All three of those players are great pickups. Unfortunately, not one of them plays left tackle, and that position is one of the top three most important positions for any franchise. Then Ballard made the move to bring in Eric Fisher, who was recovering from injury, with the hope of the lineman recapturing his magic from his days in Kansas City.

That move went down in flames, and the Colts finally drafted a possible left tackle of the future with their third-round pick, Bernhard Raimann, in this past draft. Raimann has looked every bit like the project scouts pegged him to be, having allowed one pressure for every 12.7 pass block snaps. However, he is showing promise and looks like the team made what will end up being a really good choice.

Doubling down on a mistake to make it worse

This move was done too little too late. The other biggest move that Ballard hasn’t made is actually trying to find former franchise quarterback Andrew Luck’s replacement. Instead, Ballard’s gone with a veteran quarterback who fits into one of two buckets; is either best utilized as a backup or is on the downside of his career.

Now, to be fair, it’s pretty safe to say that nobody saw Luck’s premature retirement coming. At least not until after the 2019 NFL Draft. Or the organization didn’t really believe that Luck would actually follow through with any retirement threats that were made. To be clear, that last part is pure speculation on my part.

The first realistic draft that Ballard had a chance to address the need for a franchise quarterback was the 2020 draft. The same draft that we previously mentioned. So, if Ballard didn’t want to address the need for a franchise left tackle, then he should have directed his resources to the franchise quarterback. The bottom line is the organization should have left the draft with one of those two major needs filled.

Instead, the team ignored critical needs. The quarterback in this draft class that might have been most available for the Colts was Justin Herbert, who was selected sixth overall. While Herbert was likely always the Chargers’ choice to replace Philip Rivers, and may have refused to consider a trade, the Colts did have the 14th overall pick that season. It’s not ridiculous to think they could have packaged that pick and their second-round selection to move up eight spots.

Who knows if that would have been enough, but that at least could have been a starting point. And now that we see how talented Herbert is, adding more to get him would have been well worth it. He’s been absolutely fantastic since he took over the starting quarterback job.

If the price to move up to acquire Herbert was too rich for Ballard’s liking, then there was Jalen Hurts available later in the second round who could have been drafted. Hurts may not be on the same level as Herbert, but Colts fans would much rather have him playing in Indy than Matt Ryan, Carson Wentz, or Sam Ehlinger.

Even though Ballard went with the moves that he did, he still could have secured a franchise quarterback in the 2021 draft class. This is where things really start going off the rails for the Colts organization. Reich convinces Ballard to trade for Wentz, and before that, they needed to convince Mr. Irsay. Ballard could have said no to this idea, or he could have followed through on his most favorite part of an NFL franchise, depth.

Even if Ballard had made the trade, he could have hedged his bet and traded up from No. 21 overall to the top 10 and selected Justin Fields. It’s been widely reported that the Colts loved Fields and didn’t expect him to be available with the 10th pick. Yes, the price to move up would have been expensive, and the loss of draft capital would have been great.

However, when getting a franchise quarterback that can bring you Super Bowl victories, the price paid is always worth it. For example, the Los Angeles Rams traded two first-round picks, a third-rounder, and Jared Goff. Matthew Stafford won them a Lombardi Trophy in his first year.

Fields has needed some more time to develop at the NFL level, although that may have more to do with the previous coaching staff than himself. And, again, if the price to move up and get Fields was too much for Ballard’s liking he could move up and grab Mac Jones who, in his first season, took New England to the playoffs.

Ballard’s services are no longer necessary

The playoffs are a place where the Colts have only been twice during the Ballard administration. It’s still too early to tell how good either of these two young quarterbacks is going to be. However, it’s clear that both of them are better than Ryan, Wentz, and Ehlinger.

Instead, Ballard routinely dismissed anyone who suggested he do his job a different way, giving the impression that he is the smartest man in the room and he knows best. And on top of that, he’s now created a bad salary cap situation due to players not living up to their contracts. Because of his “superior football intelligence” and the thinking that the team could develop every player into being a solid player, he created this mess that the Colts are in now.

Now, he’s had to fire his second head coach and didn’t get to select who the interim coach will be either. That decision was made by his boss. So, at this point, with the team currently being 3-5-1 and having fired their OC and HC, it’s only a matter of time until their GM is terminated as well. He has effectively been relieved of his duties and is now a lame-duck GM. Ballard’s arrogance and pride eventually cost him his job.