NFL Week 11 could be one of the most entertaining Sundays of the 2021 regular season. Playoff contenders are going head-to-head and former NFL MVPs have great opportunities to prove they’ve still got something left in the tank.

The NFL schedule for Sunday’s slate includes must-see matchups between the Dallas Cowboys vs. Kansas City Chiefs, Arizona Cardinals vs. Seattle Seahawks and the Indianapolis Colts vs. Buffalo Bills. On Sunday Night Football, we might witness a playoff preview when the Los Angeles Chargers host the Pittsburgh Steelers. Needless to say, NFL Week 11 has you covered for marquee games and also offers the potential for some huge statistical performances.

With that in mind, let’s dive into our NFL Week 11 bold predictions:

Adrian Peterson turns back the clock in NFL Week 11

No one expected vintage Adrian Peterson when the Tennessee Titans signed the future Hall of Fame running back. Unsurprisingly, the 36-year-old didn’t look particularly effective in his debut after a few days of practice. While we aren’t expecting a monster performance from AP, Sunday’s matchup with the Houston Texans offers the potential for some numbers that bring back memories.

It should come as no surprise that Houston’s defense is one of the worst in the NFL. Entering Week 10, opponents averaged 4.8 yards per rush and 158.4 rushing yards per game against the Texans from Week 2-8. Another alarming stat, Houston allowed 15 rushing touchdowns through its first nine games this season. Tennessee should dominate this from start to finish, putting Peterson in position for 60-plus yards and multiple touchdowns.

NFL Week 11 could be the start of something special. Baltimore Ravens quarterback Lamar Jackson already has an NFL MVP in his trophy case and another is very possible. Meanwhile, Chicago Bears rookie Justin Fields is beginning to show signs of game-changing ability. On Sunday afternoon, both of these franchise quarterbacks could combine for huge numbers.

We’ll start with Jackson. He is coming off a rough performance against the Miami Dolphins, but it’s difficult to imagine Chicago can replicate that game plan. Miami boasts an excellent secondary with the cornerbacks to hold up in man coverage against the Ravens’ receivers. That is something the Bears lack, demonstrated by the sixth-highest yards per pass attempt allowed (8.0) and the eighth-highest average passer rating surrendered (102.2). Pair that with Jackson’s unique abilities on the ground, this doesn’t bode well for Chicago.

On the other side, there’s an opportunity for Fields to have a big game. Against the Pittsburgh Steelers, one of the best pass-rush units in the NFL, Fields set a career-high in passing yards (291) and yards per attempt (10.0). He makes plays with his athleticism, but Fields’ arm strength and touch are even better skills. Facing one of the worst secondaries in the NFL, 225-plus passing yards, 40-plus rushing yards and two touchdowns is very reasonable.

This is more than just a reunion for Cam Newton. The Carolina Panthers know quarterback Sam Darnold isn’t the answer in 2022, but Newton could be a stop-gap solution. Newton will start in NFL Week 11, against his former head coach Ron Rivera, giving him a shot at redemption and a chance to write a much better ending to his Panthers’ career. 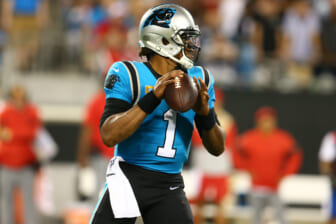 Washington’s defense showed improvements after the bye week, forcing two first-half Tom Brady interceptions. But it’s important to keep in mind the WFT entered Week 10 allowing the second-highest average passer rating (107.6) to opposing quarterbacks. Newton is also not only familiar with Rivera’s defensive scheme, he has chemistry with Christian McCaffrey and D.J. Moore. In a new-look Joe Brady offense, Newton could pull out the “Superman” celebration twice and lead the Panthers to a win. All against the team that refused to sign him.

The suggestion that the Kansas City Chiefs defense is revamped with many of its issues turned around feels flawed. Kansas City’s great performances came against the Washington Football Team, the Saquon Barkley-less New York Giants and a Jordan Love-led Green Bay Packers offense. We’re not buying into this defense with a looming matchup against Dallas.

Against most opponents, Kansas City’s pass-rush trio of Chris Jones, Frank Clark and Melvin Ingram could get the job done. It’s been effective getting pressure on opposing quarterbacks, covering up problems in the secondary. If Dallas gets Tyron Smith back for Week 11, the Cowboys should keep the pocket clean. The Chiefs could try blitzing, but Dak Prescott is one of the most effective passers in the NFL when blitzed. Sunday’s matchup can be a statement game for the Cowboys to prove once more that they are one of the best teams in the NFL and they can win a shootout.

The Pittsburgh Steelers aren’t a good football team. While the NFL standings might say otherwise, the team’s recent wins are coming against the likes of the Chicago Bears, a Geno Smith-led Seahawks’ roster and other lowly clubs. The offense is a problem, but we’re becoming increasingly concerned about the Steelers’ defense and it could be a major problem on Sunday Night Football against the Los Angeles Chargers.

On the left side, Rashawn Slater is going to stonewall Alex Highsmith and allow Justin Herbert clean throwing windows to look through. T.J. Watt will find success coming down the right side, but it’s not going to matter as much when Keenan Allen and Mike Williams are getting free against the secondary. A loss to the Chargers will be a wake-up call to Pittsburgh, this just isn’t a good team and it’s time to hit the reset button. It really wouldn’t even matter if Ben Roethlisberger plays or not.