Our NFL picks against the spread are back for Week 10, focusing on some of the most-intriguing matchups on the slate.

Week 9 offered us some big surprises with the New York Jets taking out the Buffalo Bills at home and the Detroit Lions upsetting the Green Bay. For our part, our NFL picks for Week 9 included Detroit handing Aaron Rodgers and Co. the loss.

In this latest edition, we will focus on four games (listed below) that offer up NFL picks against the spread worth your while.

NFL picks Week 10: Seattle Seahawks do their thing in Germany

The first ever NFL regular-season game will be played in Germany early Sunday morning (North American time). It should be an interesting matchup with the first-place Seahawks “visiting” a still-questionable Buccaneers squad led by Tom Brady.

Seattle has won four consecutive games since a 2-3 start to the season. This four-game span has seen Pete Carroll’s squad outscore its opponents by a combined 48 points. This team isn’t necessarily winning close games. It is simply outplaying its opponents right now.

As for what we’re seeing on the field, Geno Smith is playing at an MVP level (imagine that). He’s completing 73% of his passes for 2,199 yards with 15 touchdowns and four interceptions through nine games. Rookie running back Kenneth Walker also continues to do his thing after replacing the injured Rashaad Penny back in Week 5.

Tampa Bay’s defense is giving up the eighth-most rushing yards in the NFL at a clip of 4.6 yards per attempt. We expect Seattle to play ball-control offense, keeping Brady off the field as much as possible. That doesn’t bode well for a Bucs squad that’s ranked 25th in the NFL in scoring and has put up all of 59 points over the past four games. This is one of the NFL picks we’re most confident in for Week 10.

Kirk Cousins is his own vibe with the Vikings now in the midst of a six-game winning streak. For Minnesota, it’s been all about balance on both sides of the ball (8th in scoring, 12th in points allowed).

It’s also been all about coming through in the clutch. These six wins have all come by one score (33 combined points). For his part, Cousins is dominating when it counts the most.

As for the Bills, star quarterback Josh Allen is questionable to play in this one with an elbow injury to his throwing arm he suffered late in last week’s loss to the New York Jets. Even if Allen is able to go in this one, he’s going to be limited. That’s one of the primary reasons we’re projecting the Bills to lose a second consecutive game in our NFL picks against the spread for Week 10.

At first glance, it makes no sense to opt for Los Angeles to cover in our NFL picks for Week 10. Its defense is yielding a ridiculous 5.7 yards per rush and will be going up against a 49ers rushing attack led by the record-breaking Christian McCaffrey. Former RB1 Elijah Mitchell is also set to return after being injured in Week 1.

That’s all fine and dandy. But we must focus on the 49ers’ history coming off the bye under Kyle Shanahan. They are a mere 1-4 on these situations. It defies logic. But it’s become more than a minor trend in San Francisco.

As for the Chargers, eight of their 11 losses under head coach Brandon Staley have come by one score. As seven-point road dogs in this one, we expect the Chargers to keep it close. While the 49ers should come out on top, they are not going to dominate come Sunday night. Take that to the bank.

Philadelphia is bound to lose at some point, right? There’s no way this team is going 17-0. Unforutnately for Commanders fans, our NFL picks for this week doesn’t have them winning outright. Instead, we envision Ron Rivera and Co. to cover a spread that’s too high for our liking.

First off, Washington has won four of its past five games. Outside of a blowout Week 3 loss to these very same Eagles, they’ve been able to keep things close against superior teams. Last week’s 20-17 loss to the Minnesota Vikings was a prime example of this. 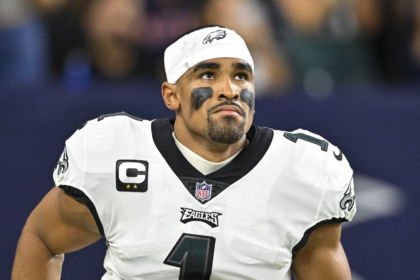 Philadelphia is coming off a ho-hum performance against the hapless Houston Texans in Week 9 that saw it tied at halftime. Sure they will get up for a divisional matchup against a bitter rival. We’re just not seeing a team capable of blowing out its opponents at this point. After all, three of Philadelphia’s past five wins have come by one score. That will repeat itself come Sunday afternoon.

For the sake of full disclosure, here’s a look at how we did with our NFL picks over the past three weeks.