Buffalo Bills QB Josh Allen dealing with elbow injury, status for Week 10 up in the air 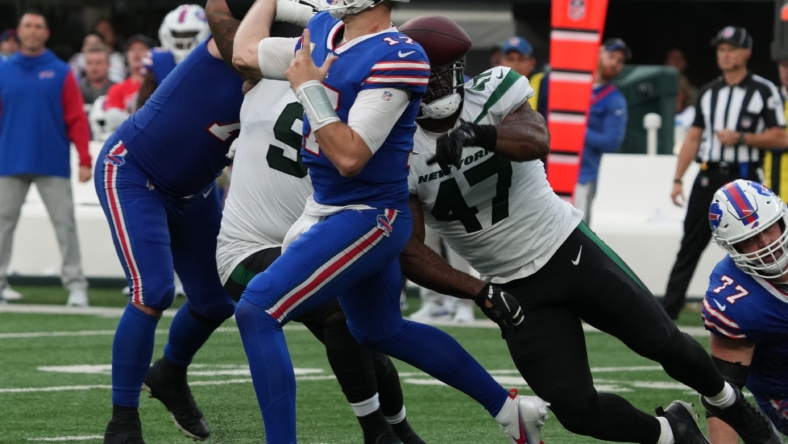 Buffalo Bills star quarterback Josh Allen is coming off one of his worst performances of the past few seasons in a 20-17 loss to the division-rival New York Jets on Sunday.

Allen completed just 18-of-34 passes for 205 yards with zero touchdowns and two interceptions. It’s the first time since Week 17 of last season that he has been held without a touchdown pass.

Apparently, the MVP candidate also suffered a shoulder injury late in Sunday’s loss. Initially, it was indicated that Allen is dealing with a bruised elbow. However, Bills head coach Sean McDermott told reporters on Monday that the team is still evaluating the injury and did not expand on the situation too much.

NFL insider Chris Mortensen reported a bit later that Allen is dealing with an injury to his ulnar collateral ligament (UCL) in the elbow with more information expected on Tuesday. It must be noted that Allen suffered a UCL injury as a rookie back in 2018 and missed four games.

At 6-2 on the season, Buffalo is tied with the Kansas City Chiefs for the best record in the AFC. It is also slated to take on one of the most-surprising teams in the NFL this coming Sunday when the Bills travel to Minnesota to take on the 7-1 Vikings.

There’s been some minor struggles on the part of Allen in that he’s on pace to best the career-high 15 interceptions the former first-round pick threw a season ago.

With that said, he’s been among the most-dynamic quarterbacks in the NFL over the past three seasons. Since the start of the 2020 campaign, the former Wyoming standout has accounted for 110 total touchdowns in 41 games.

This is certainly something we’re going to watch throughout the week. Despite Buffalo’s solid 6-2 record, it is only one half game ahead of the New York Jets and Miami Dolphins in a surprisingly good AFC East this season. Heck, the last-place New England Patriots are only one game behind Buffalo in the win column.

If, for some reason, Allen can’t go against Minnesota, veteran journeyman Case Keenum would get the start against his old team. Back in 2017 with the Vikings, Keenum led them to an 11-3 record in 14 starts.