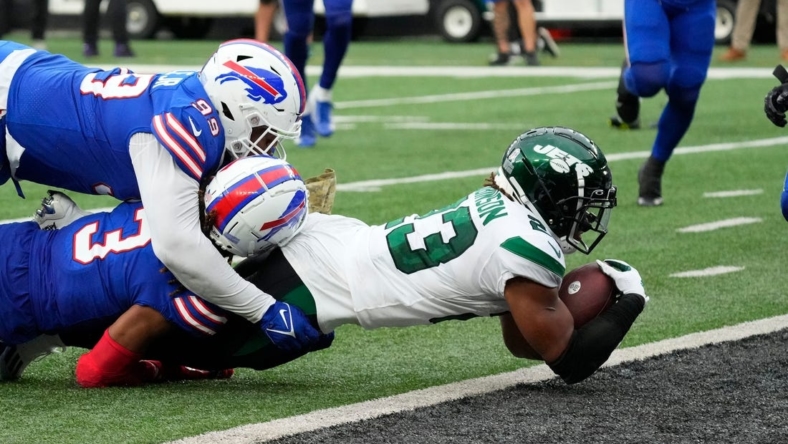 The Jets (6-3) took their three-point lead after Greg Zuerlein kicked a 28-yard field goal with 1:43 remaining, capping a 13-play drive where New York ran nine times and forced Buffalo (6-2) to use its three remaining timeouts.

On the Bills’ final possession, New York defensive end Bryce Huff hit Josh Allen’s right arm resulting in a 19-yard loss and a fumble recovered by Buffalo’s Ryan Bates at the 14-yard line. After the fumble, Allen made a low throw to Stefon Diggs and was seen holding his arm. The game then ended when Gardner kept pace with Gabe Davis along the left sideline and broke up Allen’s pass.

New York quarterback Zach Wilson completed 18 of 25 passes for 154 yards and a 7-yard touchdown pass to James Robinson in the third quarter. His final completion was a 12-yard slant to Denzel Mims that set up the game-winning field goal. Allen rushed for two TDs in the first half as Buffalo built a 14-3 lead. He completed 18 of 34 passes for 205 yards while gaining 86 yards on nine rushes.

Fill-in kicker Cameron Dicker booted a 37-yard field goal as time expired in his debut with Los Angeles, which earned the victory at Atlanta.

Austin Ekeler rushed for one touchdown and caught another. Justin Herbert passed for 245 yards, one score and one interception as the Chargers (5-3) won for the fourth time in the past five games.

Cordarrelle Patterson rushed for two touchdowns and Marcus Mariota passed for 129 yards for Atlanta (4-5). Tyler Allgeier had 123 yards from scrimmage, including 99 on the ground.

Tua Tagovailoa passed for 302 yards and three touchdowns and Tyreek Hill had 143 receiving yards and a score as Miami won in Chicago. Tagovailoa completed 21 of 30 passes while connecting with Hill, Jaylen Waddle and recent acquisition Jeff Wilson for touchdowns.

Miami (6-3) notched its third straight victory, despite a strong effort from Chicago (3-6) quarterback Justin Fields, who passed for three touchdowns, ran for another and accounted for 301 yards of total offense. Fields’ 178 rushing yards broke Michael Vick’s record for most rushing yards by a quarterback in a regular-season game.

Chicago finished with 252 yards on the ground, as the Bears joined the 1976 Pittsburgh Steelers as the only franchises in the Super Bowl era to run for 225-plus yards in four straight games.

Joe Mixon tallied a career-best five touchdowns, four of which came in the first half, as Cincinnati dominated Carolina in a home rout.

Mixon recorded 171 of his 211 total yards in the first half. Quarterback Joe Burrow threw for 206 yards and also recorded a rushing touchdown for the Bengals (5-4).

Goff threw for 137 yards, while Jamaal Williams gained 81 yards on 24 carries. Shane Zylstra and James Mitchell scored the first touchdowns of their careers for the Lions (2-6).

Aaron Rodgers threw for 291 yards and a touchdown for the Packers (3-6), but was intercepted three times. Allen Lazard caught four passes for 87 yards and a score.

Travis Etienne Jr. rushed for 109 yards and two touchdowns as Jacksonville rallied to beat Las Vegas after trailing 17-0 at home.

Trevor Lawrence, who threw for 235 yards, found Christian Kirk for a 7-yard touchdown in the third quarter. Etienne scored on the first play of the fourth quarter to give Jacksonville (3-6) its first lead of the game.

New England (5-4) totaled nine sacks as a team and Jonathan Jones recorded a punt block. New England quarterback Mac Jones threw for 147 yards and a touchdown pass to running back Rhamondre Stevenson that put the game out of reach.

Greg Joseph converted a 28-yard field goal with 12 seconds left as Minnesota rallied from a 17-7 fourth-quarter deficit to top Washington in Landover, Md.

Joseph’s game-winning kick came four plays after he made a 22-yarder with 1:52 remaining to break the tie. But Washington was flagged for unnecessary roughness for contact with the long snapper. That enabled Minnesota (7-1) to burn most of the remaining time and tee up the deciding kick.

Kirk Cousins completed 22 of 40 passes for 265 yards with two touchdowns and an interception in his first game in Washington since leaving the franchise five years ago. His 12-yard scoring strike to Dalvin Cook with 7:46 on the clock evened the score at 17. Taylor Heinicke hit 15 of 28 passes for 149 yards with two scores and a pick for the Commanders (4-5). He put them ahead 17-7 on a 6-yard touchdown pass to Dax Milne just 46 seconds into the fourth quarter.

The last-place Cardinals (3-6) lost their second in a row and for the fourth time in their past five games. Arizona’s Kyler Murray was 25-of-35 passing for 175 yards and two touchdowns while rushing for a team-high 60 yards on eight attempts.

Tom Brady became the first quarterback in NFL history to throw for 100,000 yards — counting playoff games — and led a last-minute drive to push host Tampa Bay to a win over Los Angeles.

Brady drove Tampa Bay (4-5) 60 yards in 35 seconds with no timeouts, finding rookie tight end Cade Otton for a 1-yard touchdown pass with nine seconds remaining. Brady completed 36 of 58 passes for 280 yards as the Buccaneers moved into a tie with Atlanta for first place in the NFC South. Ryan Succop kicked three field goals for Tampa Bay.