NFL contracts continue to soar each year, with Patrick Mahomes and Dak Prescott becoming two of the highest-paid players in the NFL. While no one will reach Mahones’ record-setting deal, we’ll see some stunning deals sign in the next few months.

From Lamar Jackson and Josh Allen to All-Pro talents on both sides of the ball, let’s make some predictions for upcoming NFL contracts. 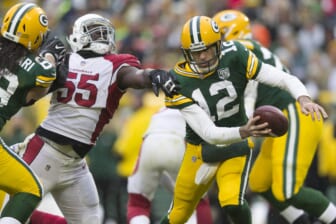 Lamar Jackson proved the NFL wrong once. Some believed he should be a running back or wide receiver amid the draft process, he won NFL MVP. He’s also heard skepticism for not having a certified agent and believes it will cost him in contract negotiations. Given all the leverage he holds Lamar and his mom Felicia Jones, we’re not worried.

The NFL salary cap will skyrocket thanks to the new TV deals, which means rising salaries. It’s part of the reason why Prescott and Mahomes average $40-plus million per season. Jackson will likely wait for Josh Allen to sign his deal, then beat it thanks to his MVP award. Given his age, a five-year deal is possible and discussions should start at $42 million annually. Ultimately, not bad for a running back.

The Green Bay Packers believed Jaire Alexander could become a special player, trading up and drafting him with the No. 18 pick in the 2018 NFL Draft. Needless to say, the 5-foot-10 cornerback has blown past even the wildest expectations and is one of the best defensive backs in the NFL.

Don’t focus on interceptions, they don’t tell the story. Four career picks in 44 games doesn’t seem impressive, but there’s a reason for it. Among cornerbacks who played 500-plus snaps in 2020, Alexander surrendered the third-lowest reception rate (50.7), the second-lowest yards per reception (9.6) and the second-lowest passer rating allowed (68.3), per Pro Football Focus. He is going to become one of the highest-paid cornerbacks in the NFL.

Of the upcoming NFL contracts, Baker Mayfield’s upcoming extension is the most debated. There are flashes of a franchise-caliber quarterback, the caliber of player who could help this team be a Super Bowl contender. But there are also instances and baffling decisions that would cause great hesitation. While there’s risk in letting things play out, that’s likely to be the scenario for Mayfield and the Browns.

With that said, NFL history teaches us the premium placed on quarterbacks means they don’t walk away. The Los Angeles Rams paid Jared Goff and the Philadelphia Eagles did the same with Carson Wentz. With the NFL revenue trending upwards, the Baker Mayfield contract will surpass those who came before him. The known is far safer than the unknown of quarterback purgatory.

One of the most hyped interior linemen to enter the draft in recent memory, Nelson is practically a brand at this point. Drafted with the No. 6 pick, he has earned first-team All-Pro honors every year since entering the league and never missed a game. Frankly, he is the Colts’ best player on offense.

We haven’t seen Indianapolis spend a ton of money on outside talent, but they reward those who they draft and develop. While there is slightly less value added from a guard than a left tackle, this isn’t a player the Colts can even entertain the thought of losing. Quenton Nelson essentially gets one of the blank check NFL contracts.

The Buffalo Bills talked to Allen about a contract extension this offseason, but both sides wanted to wait until the summer. Neither side feels a need to rush, with the fifth-year option and the franchise tags providing Buffalo assurance its star quarterback will remain with the Bills for years to come. But, a deal will eventually come. 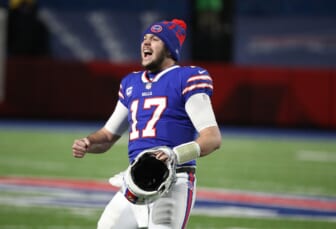 We’ve gone in-depth looking at Allen’s stats and comparing them to Watson and Prescott, both of whom signed deals worth at least $39 million per season. Given what the Bills’ face of the franchise showed throughout the 2020 season, there’s zero reason to believe he won’t land a similar deal. We would advise Buffalo to negotiate a deal sooner rather than later, quarterback contracts aren’t decreasing.