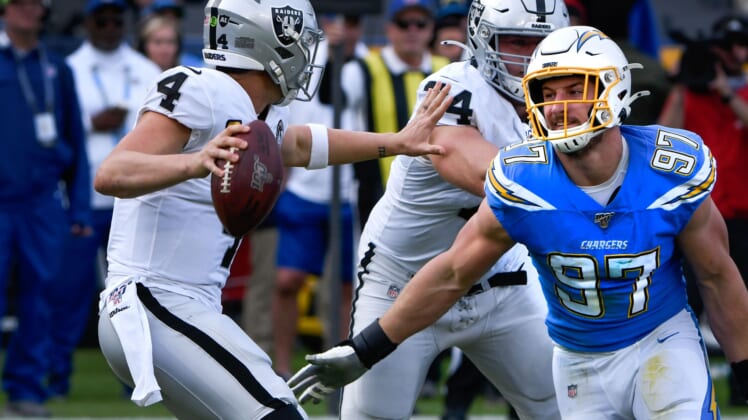 There were rumblings this summer that Los Angeles Chargers defensive end Joey Bosa might be thinking about holding out. Instead, he landed an absolutely mammoth five-year contract extension.

ESPN’s Adam Schefter broke the news of the contract extension Tuesday night. Per the NFL insider, Bosa agreed to a five-year deal worth up to $135 million, including $78 million fully guaranteed at signing and $102 million guaranteed overall — setting a new NFL defensive record.

Earlier in the evening, Bosa reported to Chargers training camp just ahead of the deadline to undergo his first COVID-19 test.

Hours later, he was the NFL’s highest-paid defensive end.

Joey Bosa puts up big-time stats, is one of NFL’s best pass rushers

It’s hardly surprising that the Chargers rewarded Bosa with a record-breaking contract. He’s done absolutely nothing but dominate since being selected third overall in the 2016 NFL Draft out of Ohio State.

Even after holding out and missing the first four games of his rookie season, he earned NFL Defensive Rookie of the Year honors while racking up 10.5 sacks in 12 games. All told, in 51 career games over four seasons, Bosa has tallied 201 tackles, 40 sacks, five forced fumbles, two fumble recoveries and 82 quarterback hits.