Before breaking down the pivotal points of his unique NFL journey, here are some incredible Josh Allen stats that provide insight as to how the Buffalo Bills quarterback has already ascended from potential draft bust to legitimate superstar in a few short years:

In 2018, Josh Allen finished with the worst completion percentage among NFL starting QBs at 52.8%. A mere two seasons later, Allen improved his completion rate to 69.2%. It’s the largest two-year improvement in NFL history.

Allen’s individual accomplishments since being drafted after Baker Mayfield and Sam Darnold are astonishing. We dive deep into the many ways Allen has improved leaps and bounds over his days at Wyoming.

The Josh Allen Story (so far)

Josh Allen entered the NFL as a major project

Coming out of the 2018 draft class, it was well known Josh Allen had a cannon for an arm. Though his frequency to make erratic throws held him back as a prospect. The NFL had just seen the rapid downfall of Joe Flacco, another tall QB with a huge arm from a small school.

Allen was in a draft class that featured Mayfield, Darnold, Josh Rosen, and Lamar Jackson. All these prospects had a major following in college and were highly scrutinized throughout their careers. Then there was this kid from Firebaugh, California who had a very impressive set of skills.

Although he was coming off a less-than-spectacular college career, Allen shined in the underwear Olympics (the NFL Scouting Combine). Not only did he show the ability to uncork a 70-yard pass, Allen ran a 4.76-second 40-yard dash while displaying an above-average leaping ability with a 33.5” vertical. Bills general manager Brandon Beane definitely took notice.

While many evaluators will say the combine doesn’t have a huge effect on a prospect’s stock going up or down, it certainly helped Allen cement his status as a top ten pick.

As a rookie, Josh Allen began his career as a backup

Despite being drafted seventh overall, Allen had to compete for the starting gig as a rookie. Facing off with the likes of AJ McCarron and Nathan Peterman, Allen entered Week 1 as a backup. It seems absolutely asinine now, as those two competitors now have a total of eight starts between them, yet Allen patiently waited for his chance.

Luckily for the young QB, his opportunity would come quickly. In the first game of the season, Peterman was overmatched as the starter. Coach Sean McDermott turned to their newly drafted quarterback, yet still lost 47-3. It was then announced that Allen would start in Week 2.

His first big moment in the NFL came against a disciplined Minnesota Vikings team that was expected to roll over the Bills in Week 3. Entering that contest, the Vikings were seen as 16.5 point favorites. Only, the Bills ended up dominating 27-6 behind the sneaky athleticism and leadership ability of their new signal-caller. 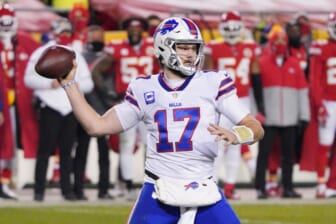 What a memorable matchup. Few anticipated Allen making fools of the veteran-laden defense led by Mike Zimmer. Yet, Allen scored two touchdowns on the ground, another through the air, and finished with the highest completion rate of his season at 68.18%. Anthony Barr was completely embarrassed by Air Allen’s iconic moment. A star was born.

Then in Week 6, Allen suffered an elbow injury that would hold him out for the next four games. In perfect storybook fashion, the quarterback’s first start back was against the Jacksonville Jaguars. The very same bunch who Jalen Ramsey was a member of.

This is only relevant from Ramsey calling Allen trash before the QB’s career even began. In that Jaguars game, Allen got the last laugh. Setting a franchise record for most rushing yards in a game by a QB, Allen, and the Bills won 24-21.

His rookie season was likely a drastic change in the competition level between his college and pro debut. While his arm wasn’t always winning games, Allen learned how to be more than effective with his legs. He became the first QB in NFL history to have 95 or more rushing yards in three consecutive games.

Allen’s season was capped off by winning AFC Offensive Player of the Week after a five-touchdown game. He went 5-6 as a starter, leading all quarterbacks with eight rushing touchdowns for the season. Yet Allen had thrown more interceptions than touchdowns and completed just over 50% of his passes (52.8). There was plenty of room to grow heading into the offseason.

Ascending to captain, Josh Allen led Bills to the playoffs

Entering the 2019 season as a starter, Allen was named a team captain. In the first game of the year, Allen proved his leadership skills, leading the Bills back from down 16-0 to victory over Darnold and the Jets.

Throughout the year, Allen’s competitive spirit continued to shine, leading the NFL with four fourth-quarter comebacks and five game-winning drives. With that, he led the Bills to a 10-6 regular-season record, clinching a playoff berth for the first time in his career.

All in all, there were a lot of things to be excited about heading into his third year, which a lot of football minds say is a crucial time for a QB’s development. The Bills’ front office knew they had a special talent on their hands, they just needed to supply him with the tools.

While the world didn’t know it yet, Bills GM Brandon Beane entered the offseason with the hopes of adding a big-play receiver for his budding star. As much of a surprise as it was, trading for Stefon Diggs was the perfect move to further the growth of Buffalo’s new franchise QB.

To be fair to Allen, the receiving corps before adding Stefon Diggs was never really great. When he was a rookie, the top targets for the Bills consisted of Zay Jones, Robert Foster, and Kelvin Benjamin. All of whom have yet to have better years than when Allen was tossing them the ball.

Logan Thomas was also on the roster, but his skills were still very raw after converting from QB to tight end just two years prior.

Before the 2019 season, GM Brandon Beane signed a couple of veteran wideouts to boost what was a lackluster group. Leading the pack, WR John Brown signed a three-year, $27 million deal. Paired with Allen, Brown had nearly a career year, topping 1,000 yards as Buffalo’s leading receiver.

The Bills also signed Cole Beasley to a four-year $29 million contract. Becoming a full-time starter for the first time in his career, Beasley thrived, catching over 100 passes. Despite the additions, Buffalo still didn’t have their No. 1 receiver. Trading for Stefon Diggs changed that in an instant.

Suddenly the Bills had their two outside receivers in Diggs and Brown, who can also win inside, and an ideal slot receiver in Beasley. Plus the talented Gabriel Davis drafted in the fourth round, who looks like a future starter. Especially now that Brown has signed with the Raiders since being released.

Fully armed with an uber-talented cast of receivers, Allen shocked the NFL by improving leaps and bounds over previous years. If the league handed out an award for Most Improved Player, Allen would have won in a landslide.

Yes, adding Stefon Diggs was an incredible decision for the development of Josh Allen, yet that’s not the only reason he improved. He truly put the work in.

As a rookie, Allen’s uncatchable pass rate was the worst in the NFL. Two years later, Allen was fifth-best among starting QBs. Also notable, Allen’s Pro Football Focus grade was just 65.3 after his first two seasons. His grade this past year? 90.9.

Now much more refined as a passer, Allen crossed the 300-yard mark for the first time and became the first Bills QB to do so since Tyrod Taylor in 2016. Allen actually started his season with three-straight wins in which he topped 300 through the air. It was the first indication, this QB was different.

Playing with a heavy heart after the passing of his grandmother, Allen etched his name in the record books. Currently, Allen is the only quarterback since 1966 to have multiple games with at least 400 yards, three touchdowns, zero interceptions, and a passer rating of 130-plus in a season.

On the way to leading Buffalo to the AFC Championship Game for the first time in over 25 years, Allen earned a Pro Bowl berth. After winning 13 regular-season games, it was well deserved. 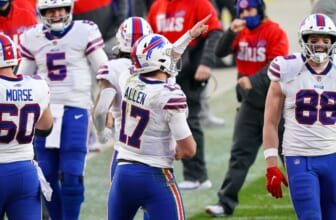 In Buffalo, it used to be all about the great Jim Kelly, and in some areas, it still is. But if Allen continues playing anything like he did in 2020, the next generation of Bills fans will have a new local folk hero to celebrate to go along with Kelly’s greatness.

If you think losing to Kansas City one game before the Super Bowl won’t provide Allen and the Bills with the motivation to top last year’s success. You’re wrong.

Be on the lookout for the Buffalo Bills to have yet another strong season, only this time, it shouldn’t surprise any of us. The Bills are a popular Super Bowl LVI pick, and Josh Allen is a major reason why.

Last year, Allen was the best football player in the AFC East Division. Someday, he may be the greatest member of the Bills Wall of Fame. If he can bring a Super Bowl title to Buffalo, his legacy will speak for itself.

I wouldn’t expect his 2020 season to be the best Allen has ever played, he’s just getting started. While Patrick Mahomes isn’t going anywhere any time soon, #17 in Buffalo will win an MVP award before his career is done and that alone will make him a legend.